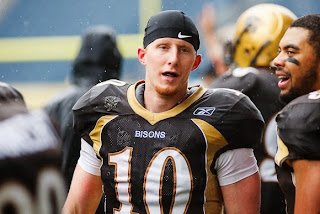 The Winnipeg Blue Bombers announce today the club has signed former University of Manitoba quarterback Jordan Yantz.
Yantz (6-1, 213, Manitoba, May 10, 1990 in Regina, SK) has spent the past two seasons with the University of Manitoba Bisons, where in 2014 he played in six games, completed 111 of 197 passes for 1,619 yards and ten touchdowns. Yantz also rushed for six touchdowns and 242 yards on 35 carries. He played for Team West in the CIS East-West Bowl.
“Jordan is going to come in and compete for a spot on our roster at quarterback,” said General Manager Kyle Walters. “We feel he has shown all the tools needed to play this position at the professional level, and we look forward to watching him compete in camp.”
The 2013 season saw Yantz finish first in the CIS with 25 touchdown passes, while tossing for 2,474 yards, good for fourth in the CIS.
Yantz participated in training camp with the Blue Bombers in 2014, before returning to the Bisons following camp.
at 5/19/2015