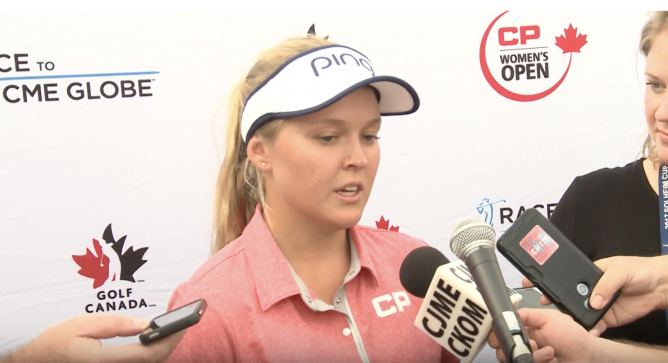 --Brooke Henderson got off to a rough start with a bogey on her first hole, but the 20-year-old rebounded to shoot a 6 under 66 in Round 1 action at the LPGA CP Canadian Womens Open at the Wascana.  She is two shots off the lead. A complete leaderboard can be found here

--After missing practice Wednesday due to a family issue back in the U-S, Zach Collaros was back at Riders practice Thursday.  The team leaves Friday afternoon for Vancouver as they will battle the Lions Saturday at 8 on TSN/CKRM.

-- Lirim Hajrullahu hit a 29-yard field goal on the game's final play to rally the Hamilton Tiger-Cats to an improbable 25-24 home win over the Edmonton Eskimos on Thursday. Edmonton (6-4) used a 24-point second quarter to take a 14-point half-time advantage. And the Eskimos led 24-13 lead heading into the fourth.

--The CFL is relaxing its stance regarding the use of props during touchdown celebrations.

The league announced Thursday that effective immediately, players can use props in TD celebrations provided they aren't hidden in their uniform or the goal-post assembly. The items also can't be demeaning or discriminatory, simulate the firing of a weapon and can't unduly delay the game.

``The stakes in our league are very high and the intensity level is second to none,'' CFL commissioner Randy Ambrosie said in a statement. ``But at the end of the day, football is a game and it should be fun for players and fun for fans.''

--An injury scare for Browns quarterback Tyrod Taylor. After throwing an incomplete pass in the first quarter against the Eagles, Taylor fell out of bounds and landed on his left side with his arm pinned under his body. Taylor got up holding his left wrist and ran to the sideline. Baker Mayfield replaced Taylor for two series before the 29-year-old came back into the game following treatment from the team's medical staff.