Catching Up With Jon Ryan 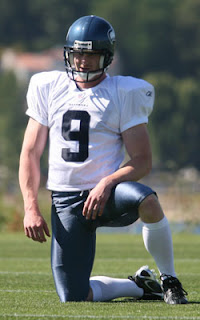 With the NFL season starting Thursday, what better time to see how Regina's NFL product is making out. At this time last year, Jon Ryan was looking for a job after getting mysteriously cut by the Green Bay Packers. After missing the opening week, Ryan signed on with Seattle and he has definitely improved the Seahawks punt game. He led the entire NFL in the pre-season in punting average by kicking 28 times with an average of just over 47 yards a punt. He answered some questions for me as the 2009 season gets ready to start.

MB:Is there a big difference in the room with Jim Mora as opposed to Mike Holmgren?

JR:I think that with new coaches there are always going to be changes within a team. The team seemed to adjust very well.

MB: A lot of people are conceding the division to Arizona because of what they did last year. Does your team feel disrespected considering injuries are what may have cost them another division title last year?

JR:I don't feel like we are being disrespected. The Cardinals had a great season last year but that was last year now every team is zero and zero so it's a fresh start for everyone.

MB:How many wins will it take to win the division?

JR: One more win than the second place team :)

MB:You had an excellent pre-season in punting the football. Do you go into 09 with even more confidence than you have had in the past?

JR: Yeah, I would say that I am going into this season feeling much more confident than my previous three seasons. I think I can contribute that partly to the good off season I had training here in Seattle, and partly to feeling more comfortable with my punting.

MB:More and more CFL'ers are starting to crack CFL rosters. Do you think your play over the past few years have helped CFL'ers get south of the border?

JR:I think it's great that more CFLers are cracking rosters down here. Was I a part of opening that door? I don't think so. I think that people are starting to take notice at the high level of football that is being played in the CFL right now. I believe that the number of players to make the jump from the CFL to the NFL is going to grow each year.

Here's hoping Jon's season ends at the Super Bowl and that he comes back to Regina with some big shiny bling on his finger. Do you think this Seahawks fan would want a picture of himself wearing a Seahawks Super Bowl ring? NAHHHH!!!!
at 9/08/2009

Jon's a good kid who has remained very humble and is still very loyal to his roots and the people who got him to where he is today. Nice job Mitch.

Correction Mitch. Hope Jon's season ends in Hawaii at the Pro Bowl so he can be recognized as one of the NFL's best

Actually the Pro Bowl is the week before the Super Bowl this year I believe.
Kevin