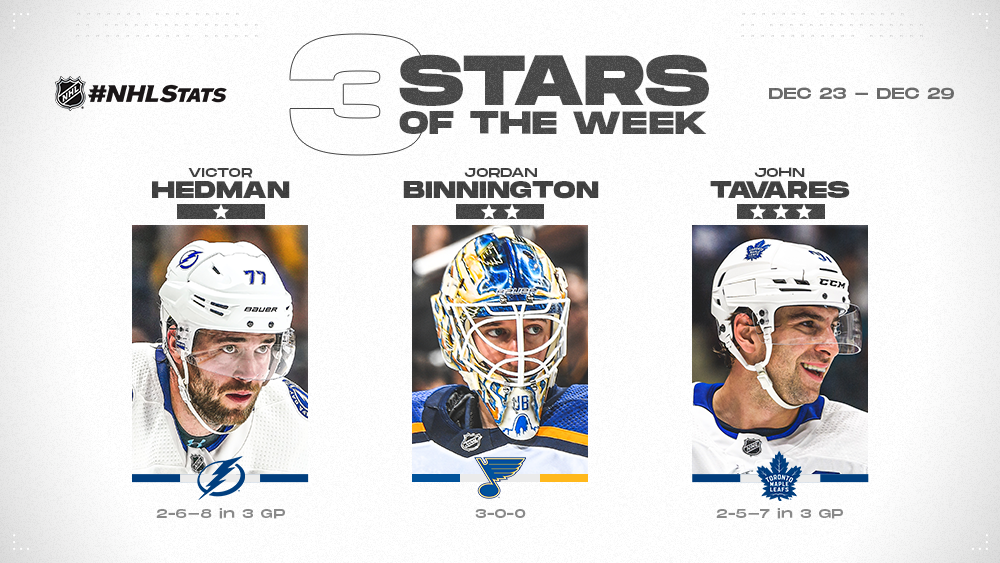 Hedman shared the League lead with six assists and paced all skaters with 2-6—8 in three contests, including back-to-back games with at least three points, to help the Lightning (20-13-4, 44 points) to a perfect 3-0-0 week. Hedman opened the week by recording 2-1—3, his sixth career multi-goal game, in a 6-1 win over the Florida Panthers Dec. 23. He followed that up by establishing a career high with four assists – his third career four-point game – in a 5-4 victory against the Montreal Canadiens Dec. 28. In doing so, he registered consecutive games with at least three points for the second time in his career (also Jan. 23-25, 2014) – no other Lightning defenseman has posted back-to-back three-point showings. He capped the week with one assist in a 2-1 triumph over the Detroit Red Wings Dec. 29, his third point of the week on a game-winning goal (1-2—3). A 29-year-old native of Ornskoldsvik, Sweden, Hedman ranks third in scoring among defensemen with 9-28—37 in 35 games, an average of 1.06 points-per-game.

Binnington started all three games for the Western Conference-leading Blues (26-8-6, 58 points) while posting a perfect 3-0-0 record with a 1.96 goals-against average and .929 save percentage to help St. Louis extend its season-high win streak to eight games. He started the week with 29 saves in a 4-1 victory against the Los Angeles Kings Dec. 23. Binnington returned from the holiday break with consecutive 25-save wins over the Winnipeg Jets, first a 5-4 overtime win Dec. 27 and then a 4-1 victory Dec. 29. Binnington shares the NHL lead with 19 wins in 2019-20 (19-6-4 in 29 GP) – including an active six-game winning streak – and ranks among the top 10 in goals-against average (4th; 2.39) and save percentage (6th; .921) among goaltenders with at least 20 appearances. The 26-year-old native of Richmond Hill, Ont., is set to close the 2019 calendar year as the League leader in regular-season wins (43), the most ever in a calendar year by a Blues goaltender (besting Mike Liut’s mark of 40 set in 1980).

Tavares ranked second in the NHL with 2-5—7 in three games, posting a three-point game on either side of the holiday break, to help the Maple Leafs (21-14-5, 47 points) claim five of a possible six standings points (2-0-1). He started the week by factoring on each of Toronto’s first three goals in an 8-6 win against the Carolina Hurricanes Dec. 23, collecting all three points (1-2—3) within the first 5:10 of the game to establish a franchise record for fastest three points from the start of a game. The Maple Leafs captain again had 1-2—3 in a 5-4 overtime victory over the New Jersey Devils Dec. 27, the seventh set of back-to-back three-point games in his NHL career. He closed the week with one assist in a 5-4 overtime defeat against the New York Rangers Dec. 28. The 29-year-old native of Mississauga, Ont., has had at least three points in a regular-season game 58 times; only six players have more such performances since 2009-10.