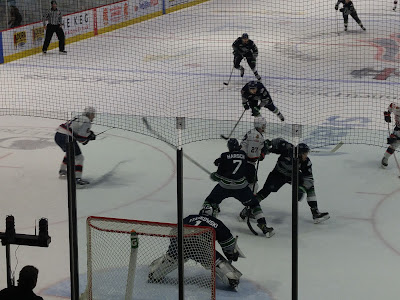 The end result was not what a majority of the sold-out crowd at the Brandt Centre wanted to see, but no one could be disappointed with what the Regina Pats and Seattle Thunderbirds treated WHL fans watching in person or on TV across Western Canada in Game 1 of the Ed Chynoweth Cup final.

In what was simply an outstanding hockey game, and a likely precursor to what we will see in this series, the T-Birds took Game 1 in overtime by a score of 2-1.

Grenfell's Donovan Neuls ended it just 14 seconds into overtime when he knocked home a shot that rang off the crossbar courtesy Ethan Bear. Bear, a member of the Ochapowace First Nation, had Seattle's other goal

Connor Hobbs had tied the game with just under 8 minutes to go.

In the second period, Pats captain Adam Brooks was levelled by a hit from Turner Ottenbreit that left the 20 year old bloodied and dazed. He was helped off the ice and did not return. His status for Game 2 is not known/

After the game, Pats head coach John Paddock says the hit reminded him of one that made Scott Stevens an NHL hall-of-famer and wasn't necessarily dirty.

The two teams will meet again at the Brandt Centre Saturday before heading to Seattle for Game 3, 4 and possibly 5.


Good on Paddock for not publicly complaining about the hit. When I first saw it, I thought it was high, but watching it when I got home, it was a good check and yes, it was Scott Stevens like.


Ethan Bear with one bad hand was the best player on the ice last night.