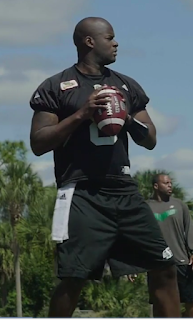 Those hoping to see Vince Young at quarterback for the Riders Saturday night won't get the chance.

Riders Head Coach and General Manager Chris Jones told reporters in Saskatoon Wednesday that the hamstring injury suffered at practice Tuesday will prevent him from playing.

Jones said it's a tough break for Young, but its one that could end up being a positive for both Bryan Bennett and Brandon Bridge.

“Unfortunately for Vince, he’s not going to get that opportunity." Jones said. "We’re going with the other two and the big stage is there for them.”

As for what this does to Young's attempts at a comeback, Jones admits it leaves him in a tough place.

“It’s tough to get evaluated if you’re not out there playing,” Jones said. “Vince is up against it. He’s been around football before and he knows exactly what he’s got to do to get back healthy and get back out and start competing.”

So Jones' desperate experiment is unravelling.
It could be beneficial, but not because Jones planned it that way.


This saves him from getting his a$$ booed off the field.