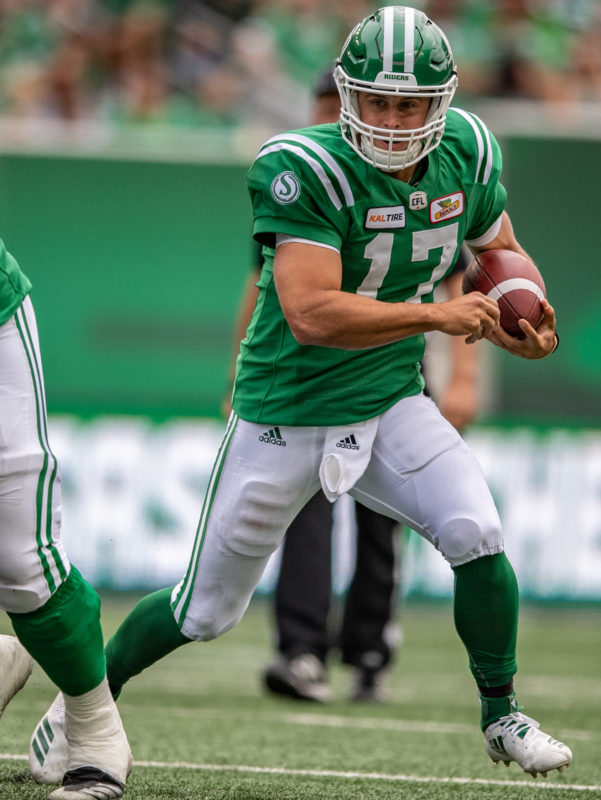 
The last time Rider fans saw Zach Collaros he was walking off the field after absorbing his third concussion of the 2018 season in a game against the B.C Lions.   Many thought Collaros’ days in green-and-white were over and maybe his CFL career was as well.

That isn’t the case though as Collaros is back with the football team having signed a one-year deal with them on Tuesday.  He was back at Mosaic Stadium Wednesday saying its time to get back to work and he is excited about it.

“I feel great!” Collaros proclaimed. “I’m not surprised to be back.  I spoke with Coach Dickenson several times after he got the job and he mentioned how he felt about me, Regardless of some of the things that happened, I had a blast and I’m looking forward to being back here.”

Collaros admits his touchdown to interception ratio was not ideal last season, but he did say they won a lot of games last year and he intends to win a lot more this year as well.

When asked about retirement, Collaros said it was something he never thought about.

“Retirement didn’t really cross my mind in the off-season.” Collaros said. “About a week after that final game, I was feeling pretty good and I haven’t had any issues sent.  I love this game, I’m a competitive person and I just want to get out there and play so no, retirement wasn’t on my mind.”

General Manager Jeremy O’Day, who announced Collaros will go into the season as the number one quarterback on the depth chart, admits the health status of Collaros is a concern and the team is speaking with some veteran quarterbacks about coming in.  While O’Day would not say who those quarterbacks are, it is thought he was speaking about Travis Lulay and Kevin Glenn.

O’Day also spoke about what the team has done in the first two days of free agency saying he feels like the squad is better than what it was when free agency started with the additions of running back William Powell, defensive lineman Micah Johnson, linebacker Dyshawn Davis and receiver Cory Watson.

He added several other offers were made, but the interest in player was not reciprocated by that player having interest in the team for whatever reason.  When it came to Willie Jefferson, O’Day said they did their best to try and keep the team’s nominee for most outstanding player and top defensive player around, but Jefferson had a desire to change addresses.

“We were having discussions with Willie before free agency. I won’t speak to the reasons as to why he didn’t come back, but we made him a fair offer.  He decided to enter free agency and we asked him to keep us in the loop with an invite to come back if he desired.” O’Day explained. “In the end, he decided to go elsewhere. ”

O’Day also said the team is speaking with Naaman Roosevelt about coming back and that the team still has its targets on some players  with offers out there.  He would not say how many players they are speaking with though.

He can't be any worse than he was last year. In several of those so called victories he never even generated a touchdown.

Poor Riderville. Hurt, slighted, rejected again. Relegated back to the basement of the CFL behind the top dogs. Rejection by premier league pivots speaks volumes loud and clear on that organization. Nary a free agent destination. Be a long time coming before that team is competitive or relevant again. Riderville now back to making negative commented excuses, sad.
ADVICE! Rider fanbase, why don't you take a very good hard look at some of the management personnel, management structure in place as to why this has happened. Take a good hard look, be honest in your team assessments. You'll find the answers.


I'm OK with this move as long as they don't bring Bridge back. The Riders simply can't have the same three guys under center as last year when you see how bad the QB play was.

1) He is right when he says just because a team has a desire to have you doesn't mean the player has that desire. Will we know why some players didn't come here?

2) Was Jefferson's refusal to come back a Chris Jones thing or something else? By listening to O'Day, I would say its the latter. Why not just say he was a Jones guy. Vanstone will get the answer to this at some point.