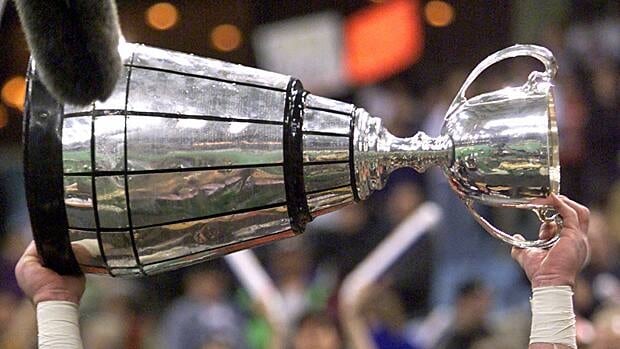 --Yeah, it's late, but it's a holiday Monday, I'm under the weather and there was curling on this morning, but here is the Monday column.


--Rider Nation is on pins and needles wondering if the 2020 Grey Cup game is coming to Mosaic Stadium.  At first, I thought it was a slamdunk when the Riders said there would be viewing parties set up Thursday afternoon, but then I found out Hamilton was doing the same thing.  One would think you wouldn't hold a party unless you knew what the verdict was going to be, but someone is going to be disappointed.

I have heard from a couple of people that Commissioner Randy Ambrosie will announce both the 2020 game and 2021 game for Saskatchewan and Hamilton or vice-versa so maybe that will be the case.  I guess we will have to wait.   Hamilton hasn't had the game in over two decades so they do deserve to showcase Tim Hortons Field and have the game back here, but everyone knows what a Grey Cup in Regina will be like.  As for Montreal, they seem to have been shut out of the picture altogether.

--The first wave of CFL free agency is over.  The news of free agent signings has started to trickle to a slowdown with announcements here and there.  Looking over what is left, there is still some value out there.

Names like Vidal Hazelton, Terrence Toliver, Weston Dressler, Jon Gott, Tristan Okpaulougo, Marcus Ball and Ciante Evans are still out there.  They can help someone.  I would have to think the Riders would like to add another receiver and then some depth in certain areas.

--How can you not like the Brett Lauther story?  When Tyler Crapigna went down last year, many wondered if Lauther could come in here after being out of the game for so-long and contribute.  We got our answer to that question early on.  As we found out, he ended up being quite the weapon for the green-and-white.  Where would they have been had it not been for him? I am guessing they aren't 12-6 and hosting a home playoff game.   If Lauther can even come close to duplicating what he did in 18, both this season and in 2020, he can look forward to what I'm sure will be another nice payday.

--I can't be the only one who isn't surprised that Ricky Ray hasn't announced his retirement yet.  I just can't see him coming back after last year's neck injury. He isn't really thinking about coming back to play is he?  If so why?  He has done everything you would want and a call from the CFL Hall of Fame will come..

--People in this country were quick to pounce on the fact that there was hardly anyone in the stands at the AAF game in Memphis this weekend.  620 CKRM Rider football analyst Luc Mullinder was quick to point out CFL fans shouldn't be gloating at that when there are attendance issues in Montreal, Toronto and Vancouver.  He is right!

--How can people in Ontario bitch and moan about the fact they were woken up because of an Amber Alert? There is no debating it, if you were one of those people, you are a horrible human being. You can't defend yourself on that one and it looks even worse because tragically the girl the Amber Alert was put on ended up dead.  Be proud!

--Regina mayor Michael Fougere, Chamber CEO John Hopkins, AGT Foods founder Murad al-Katib and another gentleman played some songs together at the Mayor's state of the city address last week.  I wish I would have seen that.  I now have to ask if this group can sit down and play "Experience Regina".  That needs to happen.  Yes it does!!

--Don Cherry certainly opened up a hornet's nest with his thoughts on the Carolina Hurricanes post-game celebrations.   I agree with some of what Cherry says, but on this one I am firmly on the other side.  There is no harm in what the Hurricanes are doing at all.  Cherry thinks the "schtick" is dumb, but has no problem with the "schtick" that is his wardrobe.  Cmon Don!  It's called having fun and professional sport needs more of that.

--I watched 5 minutes of the NBA all-star game on Sunday.  In honesty, it was 4 minutes more than I thought I would.  The 5 minutes I saw certainly wasn't basketball.  Can we please just get rid of all-star games and continue the season  I don't see the need for them anymore.

--Robyn Silvernagle has had a nice start at the Scotties, She is an inch or two from being 3-0 as she came oh so close to beating Jennifer Jones in her opener on Saturday.  There is still a long ways to go, but Silvernagle could so some damage in Sydney before all is said and done.  Everyone expects Jones and Rachel Homan to battle in the final and I understand that, but if any rink is going to throw a monkeywrench into that plan, it could be Silvernagle and her North Battleford gang.

--When you look outside and see what it is like and then you turn the channel on Sunday afternoon and see the PGA's Genesis Open being played, it makes your heart sink just a little.  Spring is coming right?

--It has probably taken you longer to read this than Cain Velasquez's effort in the octagon on Sunday, All it took was 26 seconds for Yannick Ngannout to turn out Velasquez's lights  The man is a bonafide monster!


Don't forget about Rob Bagg. He can help someone out too. There is still some gas left in that tank!

Rob and Weston are so far past their prime they should be looking at coaching in the college ranks.

How dumb can he be?


I've watched two weeks of the AAF. Its good football. Don't know if it is CFL calibre, but I like what I've seen


Is anyone desperate enough to sign Josiah St. John? What a swing and a miss that was!


Someone like Dressler would be a great mentor for guys like Evans and Moore. JWL if he comes back too.