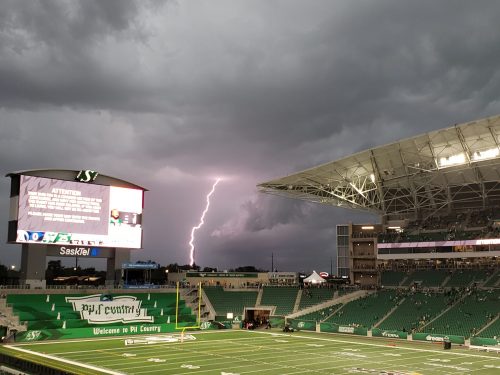 A severe weather protocol designed to empty Mosaic Stadium during games went off without a hitch on Monday.

During the Riders home opener,  people were told to leave their seats just before halftime because of a severe thunderstorm that contained lightning rolled through Regina causing a two-hour delay in the game.

Riders President Craig Reynolds says he is impressed with how smooth the protocol went. "Our biggest concern here is fan safety so that element went very well. We went into what we call a shelter and place where they took cover in the concourse and covered areas in the stadium."

Reynolds says it's not easy to get 30 thousand people out of their seats to take cover, but the process went well. "Full credit to our security personal, to Evraz Place who operates the stadium, everybody works on this annually and we actual practice for this scenario. We actually had to use it tonight and it worked well."

He adds that the organization will take a better look at how the process went Tuesday morning and discuss potential ways it can be improved. "You play football in Saskatchewan and really any time of the year, but certainly in the summer months, you have the chance of a thunderstorm."


The biggest problem I had was the lack of transit. Why weren't buses made available to take people home once the delay hit. If you want people to take the bus, you have to make it accessible for them to go home when something like this happens.


Scruffy, you and Taylor did a great job in keeping us informed last night. Loved the bits with Lazaruk and Reynolds. Great work!


I'm with Anon 1. That made me more upset than the new coked-out Gainer!

Whoever decided to put Gainer on a buzz should be demoted to buttering hot dog buns.