--I have said it once and I will say it again.  The Calgary Stampeders are the New England Patriots of the CFL.  Sorry Winnipeg, you can sit there and start crowing four weeks into the season about how you are the best club (we all know that to be false around here in these parts FWIW), but until you beat Calgary in the playoffs, you're not.   The same goes to the other teams in the West.

The defence they have doesn't resemble what they put on the field last year.  Bo Levi Mitchell was out meaning Nick Arbuckle was making his first start of the year,  Don Jackson was out meaning the run game was put in the hands of Terry Williams and Ka'deem Carey.  They were coming off a last-second win against BC in a game they didn't deserve to win.  They were vulnerable.  This was the year they fall back.   Think again!

The Calgary Stampeders, as much as you and I don't like them in the 306, are still the gold standard in this league and it was shown Saturday night at Mosaic Stadium as they clubbed the Riders.

Even though it was a five point game in the third quarter, I think most knew it was a game where the score flattered the home side as Calgary was taking them to school in all aspects of the game.  With Arbuckle under center, the offence didn't miss a beat.  The defence was shutting down what had become a potent Riders offence and special teams was getting it done too.   Calgary took the Riders to the woodshed.  It is as plain and simple as that.

The biggest cheer of the night arguably came when Gainer came on the field after showing us he had ditched his green contact lenses.

Hats off to the Riders for making that change by the way and producing the highly-entertaining video.  Some suggested it was a marketing ploy. Uhhhhh nope.  What that was was righting a wrong.  While some still like the chubby rodent and want him back, I think we all agreed the "eyes" had to go and they were.  I am OK with the new-look Gainer now and I think many in Rider Nation are as well.  I think the team also got a very strong message.

How about this message? 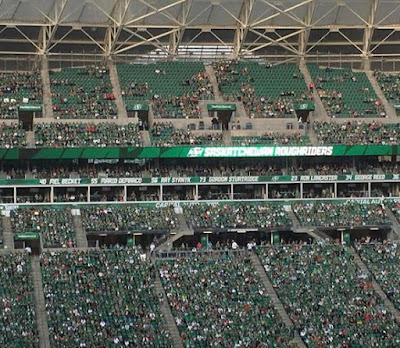 On what was a gorgeous Saturday night for football, where was everyone?  The Riders have played 8 o'clock games on Saturday nights before to a near sold-out or sold-out crowd but not on this night.

Have the attendance problems that have plagued the CFL hit the best fan-base in the league?  Many sent me reasons via Twitter, but the excuses that its wedding season, people got out of town for the weekend, the travel involved and others have been happening the last few years and we saw solid attendance.  Is it time the Riders and other teams start looking at their ticket costs? They are trying, but are they trying hard enough.  At the end of the day, they still have to make a $$$ so don't expect   After a win over Toronto, the fan-base was feeling good and with the team's biggest rival coming into town on a Saturday night, you would think the place would be hoppin.  NOPE! One person said "the buzz" around a Riders game has been lost.  Has it?

While the Riders did announce a crowd of 29,000, I think everyone in there knew it was about 23 or 24 thousand.  This isn't a Rider thing, its a CFL thing and when low turnout is happening here, it sends a message.

--620 CKRM's Michael Ball brought up a point on the pre-game show that I had been wondering about and wondering about since the Canada Day win over the Argos.  Bo Levi Mitchell despite not playing was on the Stamps sideline staying in the ear of Nick Arbuckle all night.  Why hasn't Zach Collaros been doing that?  Yes, I understand the injury to BLM is quite different than what Collaros has, but shouldn't your quarterback be on the sidelines giving advice instead of being at home in Hamilton where he can't help in any way. What are your thoughts on that?

--There is no doubt Fajardo-mania which swept the province has cooled off considerably, but young quarterbacks are going to have a bad game.  What concerns me is the veteran defence with many back from last year not performing to the level they did last year.   Jason Shivers is no Chris Jones but this team is running the same scheme and shouldn't be getting exposed but they are----especially on second and long.   The question was asked to Head Coach Craig Dickenson if this is a good 1-3 team going into the break or a bad 1-3 team.  Dickenson said they have a lot of work to do in the bye week before getting ready for BC on the 20th. He is right! I've seen a lot of good in the first four games and a lot of bad.  After four games, I'm still not really sure what kind of team this is, but it isn't a team that is worthy of first or second in the West which is what I said at the start of the year.

--It is no secret I don't like "the rouge".  I think the CFL and have thought the CFL should eliminate the single point or at least tweak the rule somewhat.  I don't know how you can be rewarded for failure.   For the BC Lions, they weren't only rewarded they were victorious.  Yes, if the endzones at BMO Field were regulation, we wouldn't be having this conversation but the fact the Lions won on a single on a missed field goal because Chris Rainey stepped out of bounds is embarassing.  That isn't how you should win a football game.   If that had happened to the Riders, I can only imagine the steam which would be emanating from the collars of Rider Nation far and wide.

--Question on Twitter:  What is the first sporting event you remember either going to live or watching on TV?  I think my answer might be the 72 Canada-Russia summit series.  I actually remember Paul Henderson scoring the goal, but being at such a young age, I had no idea at the time just how big a goal had been scored and what it had done for the country.   I can't remember what year it was, but my first Rider game was a 40-0 win over Edmonton when Bill Baker crushed Tom Wilkinson and Bruce Lemmerman within plays of one another.

--It's good to see most Raptors fans not hold any animosity against Kawhi Leonard for leaving after one season to play for the Clippers.  Most, while disappointed Kawhi isn't continuing his NBA career in Toronto, are happy he selected the Clippers over the Lakers.   One person I know was grumpy about it saying who cares if he goes home. This person is a Leafs fan as well so I just said two words---John Tavares.  Conversation over!

--Wrestling fans know what happened July 6, 1996.  It was on that night the nWo was born.  I remember watching the repeat of that pay-per-view at the home of Kelly Remple who knew what was going to go down and stayed completely poker-faced as I watched Hulk Hogan turn heel.  I think the Silver Fox will tell you my jaw literally hit the floor.  Wrestling fans know that was the night that maybe changed the industry as we knew it.

--Finished watching the latest season of Billions on Sunday night.  What a great show!  What do I fill my time with until a new season starts? How can you not love Bobby Axelrod!

Don’t go there about Collaros not being on the Riders sidelines, the guys is dealing with a concussion and one of the last places he should be recovering from that injury is in a football stadium dealing with The lights and sounds of a football game while his brains are scrambled.

Great observation about Collaros being in Hamilton. Two straight years, he's back home in Hamilton and not on the sidelines helping his fellow QBs. Time to cut the cord.

Collaros has never wanted to be a Rider. Remember at the end of last season when he just skipped town leaving Brandon Bridge to deal with the media?

Interesting point about an injured QB either helping his teammates out or disappearing completely.
How many times was Durant on the Rider sidelines during his season ending injuries? I don't recall him ever being around the team.


Everyone was saying the problems were over. Calgary was just an afterthought. What a reality check!

That was one sad weak-ass performance.

Attendance is a problem across the whole league. That includes rider Nation. I saw the people trying to not look in the mirror and admit there is a problem with your twitter back and forth Saturday. As you said, there have been Rider games played at Saturday night at 8 both at Mosaic and Taylor Field where it was full and the same reasons these people were saying are not nothing new. The one that said there are a lot of weddings on Saturday night killed me. Like there has never been a summer Saturday wedding in Saskatchewan before. HA HA!

The league is losing fans. They need to find a way to get them back. Ticket prices is one thing, but it isn't the only thing.

Ambrosie should maybe look at how to correct this before this global initiative he has embarked on.

I'm with the 2nd poster. Collaros should be rehabbing in Regina and not Hamilton. He should be around his team, in meetings, etc. etc. If its so bad that he can't do that, say adios and move on.

For the price of Collaros' contract you'd think he could stay in Regina.

Winnipeg will be so disappointed when Calgary beats them in the playoffs.

This Gainer is much better. Credit to the Riders for seeing a mistake and fixing it. Not really sure why we had to revolutionize the complete look, but its time to move on.

Apparently Anon #9 is the only person around here who has ever actually been involved in sports. Put a concussed QB on the sidelines during a game. Brilliant. Stick to playing Madden, mouth-breathers.