Welcome to Saturday and the usual thoughts running through my muddled mind.  As always, they come in no particular order and they come one day later than usual due to the Riders game. Get used to it for the next couple of weeks.

--The pre-season has come and gone. Despite the Riders six point loss to the Bombers on Thursday---one that Winnipeg tried to give them late, I think there is a lot to be encouraged about.  That being said, don't plan the parade route.

--The comments from Coach Dickenson earlier this week saying his offence was not one that will be "huckin and chuckin" was one that didn't go over well.  Dickenson alluded to that after the game Thursday admitting he didn't know the reaction he would get to that. (Cmon Craig, you've been around here longer than that). He explained that statement after the game saying he doesn't believe in sandlot football and that they want to be precise and calculated.  I think if Rider fans get what they got from the offence on Thursday where they racked over 430 yards of total offence they will be happy.

--What happened to Sam Hurl?  He has gone from being last year's middle linebacker to being non-existent. While we don't know if Hurl will be released, we do know DL Chad Geter, QB David Watford and DB Crezdon Butler have been with that news trickling out late Friday night..   The release of Geter surprises me.  I thought he would be the replacement for the still effective, but not getting younger Charleston Hughes.

--I still believe the Riders are a playoff team with a healthy Zach Collaros, but a team that finishes last if he goes down for more than a third of the season. Yes, you could say the fortunes of all teams take a nose-dive if their starter goes down maybe everywhere except Winnipeg and Calgary.

--I would put Ottawa in that last paragraph, but when Jon Jennings is beat out by Dominique Davis for the starters job, it makes me wonder just how much longer Jennings has in the CFL.

--A question on Twitter this week.   If you could make one sporting moment disappear, what would it be?

--A girl from Saskatchewan singing the national anthem at the NBA Finals.  Damn rights! What a great job by Tenille Arts!  It may have sounded a little different from other anthems at the start, but she put her own spin to it and it wasn't a dramatic one.

--Take nothing away from what the Raptors are doing, but an already great NBA Finals would be greater with Kevin Durant.

--How many people were in Regina's Jurassic Park on Friday night? With Game 5 being shown at Mosaic Stadium, I wonder how many will go to watch what could be one of the biggest nights in Canadian sports history. I might just have to go check that scene out.

--The NFL is going to Winnipeg.  The game that was pitched Regina's way will be played at Investors Group Field.  With the Bombers not playing another home game until the Banjo Bowl, there will be lots of time to get everything ready for them.  That, and other things, were the big obstacle in getting the game here.   This just in. Regina will be getting an NFL exhibition game as early as next year.  Remember where you read it first.   With the game in Winnipeg, why not invite the New York "Jets"!!

--I think it is safe to say this year's Stanley Cup playoffs will go down as the "Year of the Bad Call".  The NHL is getting roasted for a trip by Tyler Bozak on Noah Acciari that was a no-call and led to what turned out to be the game-winning goal for St. Louis in Game 5.

The Bruins have been fortunate in these playoffs and Boston-haters will say they get what's coming to them much like San Jose did.  That is fair, but we have seen wayyyy too many bad calls in the playoffs that should create some interesting off-season conversation.  Blues coach Craig Berube wanted the stripes to put the whistles away after Game 3.  They apparenty listened. Imagine if St. Louis had won the Cup because of this.   They have a chance tonight.  The remarkable worst to first story continues. 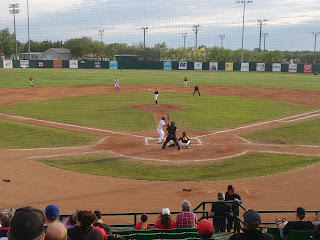 --I have said it once and I'll say it a thousand times.  A Regina Red Sox game on a beautiful night is a must.  I got to my first game of the year Friday night as I filled in on PA for Sean Kleisinger.  The only thing that would have made it better was having a couple of cold ones while sitting with friends along the first or third base line.  If you've never been to Currie Field for a Red Sox game, you don't know what you're missing---especially on a night like last night.

--Who thought it was a good idea to have Calgary in their reds and BC in their oranges for the CFL pre-season game? Yeesh!


McRoberts has the chance to be a big-time player. Love what I have seen from him both in camp and in games. Don't screw this up JO!


What sporting moment would I love to erase in time? Oh, can we go back to the last seconds of the 2009 Grey Cup?

Signed Every f-ing Rider fan out there

Like you, I am still concerned about the QB position if and when ZC goes down.

If Labatte is out for a while, the decision for Dickie becomes a little easier. Any updates?