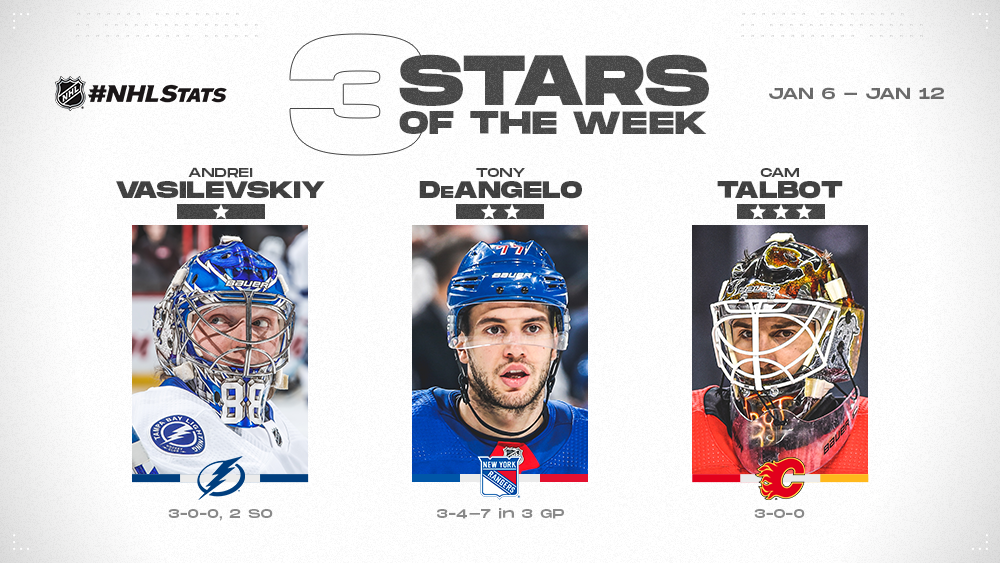 Vasilevskiy won three games in as many starts, recording a 0.67 goals-against average, .972 save percentage and shutouts in back-to-back games as the Lightning (27-14-4) won three of four contests for the week and rose to second place in the Atlantic Division. Vasilevskiy made 21 saves in a 9-2 victory over the Vancouver Canucks Jan. 7, stopped all 25 shots he faced in a 4-0 win over the Arizona Coyotes Jan. 9 and turned aside all 23 shots in a 1-0 win over the Philadelphia Flyers Jan. 11. The victory over Philadelphia extended the Lightning's win streak to 10 games, matching a franchise record set from Feb. 9-27, 2019. The 25-year-old Tyumen, Russia, native recorded eight wins during Tampa Bay's 10-game streak, improving to 22-9-2 on the season with a 2.58 goals-against average and .915 save percentage.

DeAngelo topped all NHL scorers with 3-4--7 in three games, leading the Rangers (21-19-4) to a 2-1-0 record for the week. DeAngelo recorded a pair of assists in a 5-3 victory over the Colorado Avalanche Jan. 7 before notching his first NHL hat trick as part of a career-high five-point performance (3-2--5) in a 6-3 win over the New Jersey Devils Jan. 9. DeAngelo registered the first five-point game by a defenseman in the 2019-20 season and tied a Rangers franchise record for points by a blueliner in a regular-season game, set on two occasions by Brian Leetch. The 24-year-old Sewell, N.J., native leads Rangers defensemen in scoring with 11-25--36 in 44 games. New York’s 125 combined points (34-91--125) by its blueliners pace all clubs in 2019-20, eight more than the next closest clubs (TBL, WSH w/ 117).