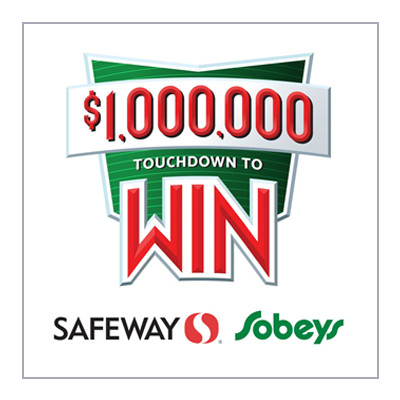 Canadian Football League Commissioner Randy Ambrosie spoke with Winnipeg Blue Bomber fan and Safeway and Sobeys’ Touchdown To Win contestant Karen Kuldys today and invited her and her family to attend this year’s 105th Grey Cup presented by Shaw in Ottawa as VIP guests of the League.

“We’re all fans and whatever team you root for, we would all love to see a CFL fan win a million dollars. So we all feel for Karen and what she must have gone through last night, and what she must still be feeling today. I was in Winnipeg for the game and I spoke with her today. On behalf of the CFL, I invited her and her family to come to Grey Cup this year as our guests,” said Randy Ambrosie, the CFL’s Commissioner. “I know Karen’s a Blue Bomber fan and her son plays football, so we spoke with Wade Miller, the President and CEO of the Bombers, this morning. He immediately pledged to provide Karen with Bombers season’s tickets for the rest of this season and next season as well. We all know these things can’t compare to a million dollars but we wanted to do something to let her and her family know that we all wished she could have won last night.”

He added: “It was a very tough call made by our official last night, one that could have gone either way. There are tough calls made all the time in our game because these are world class athletes, moving at tremendous speeds, and we ask our officials to make difficult judgement calls in the blink of an eye, and we have to respect their decisions.”

Safeway and Sobeys’ Touchdown to Win Contest, which awards a Visions $25,000 home theatre package to a contest entrant if one kickoff is returned for touchdown, and a million dollars if a second kickoff is returned for a touchdown in the same game, is part of the grocery chains’ partnership with TSN, which along with RDS is the exclusive broadcaster of the CFL. Today, Sobeys announced that, in addition to the home theatre package, it will provide Karen with free groceries for one year at any Safeway or Sobeys.

“We were thrilled that Karen won a $25,000 home theatre package after one kickoff was returned for a touchdown,” said Lyne Castonguay, Executive Vice President, Sobeys Inc. “And while we can’t reverse a referee’s on-field call, we are delighted to be able to offer Karen a year’s worth of free groceries in addition to the great football offers made by the CFL and the Blue Bombers.”


Orridge wouldn't do this. He probably wouldn't even be aware of it happening. #FACT


This move isn't very Winnipegish. Good move by Ambrosie, Miller and Safeway. I think we are all in agreement though when we say this wouldn't be happening if it weren't for the complete incompetence of CFL officials yet again.

Very CFL..ish, The only time in this persons life that they will actually likely ever have in winning a small fortune. Only to have it taken away by a bad call. A very bad call. Now they are trying to prop up their brand by offering her scraps. Nothing more than scraps because these are retail values of some things that these people get at cost or below. It's all really worthless. This isn't the grocery chain or the Blue Bombers fault. It lays clearly with the CFL, it's management and officials. The officiating has been so poor for so long that people now openly laugh and joke about it. However I don't think that that poor woman is laughing or joking about it now. It's too bad some lawyer doesn't litigate the CFl on behalf of this woman for even half the take. It would still be a big win for her. She got so shafted….

The Winnipeg Sun just reported that her husband Stan won $670,000 in a 2007 PayDay Jackpot, therefore, there is no need to feel sorry for Nancy. As for her daughter who's about to return to her job at Superstore after her maternity leave, but has vowed to go on welfare rather than return to Superstore, that's another matter in itself.