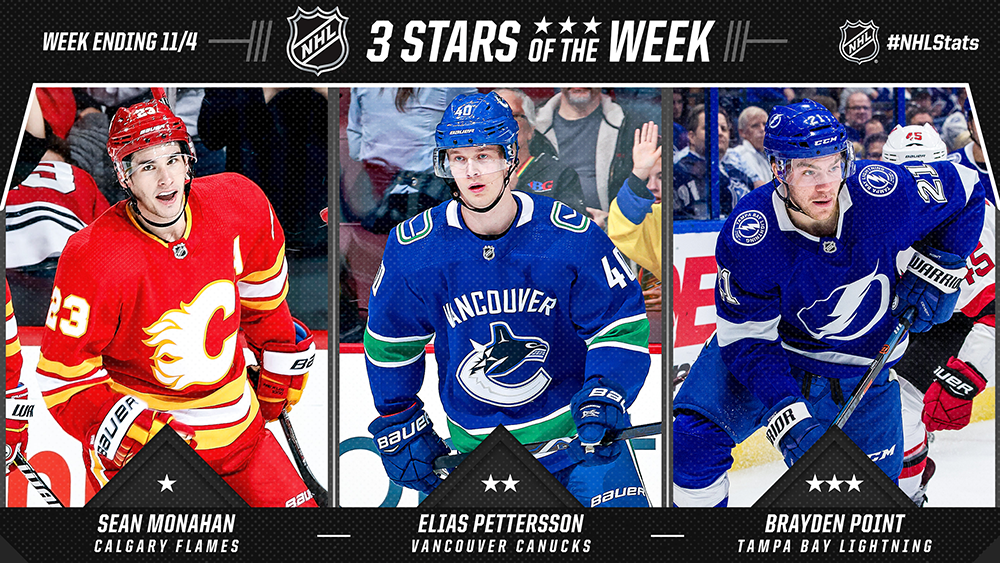 FIRST STAR – SEAN MONAHAN, C, CALGARY FLAMES
Monahan registered four straight multi-point performances, leading the NHL with 4-4—8 to propel the Flames (9-5-1, 19 points) to a perfect week and into first place in the Pacific Division. He collected 1-1—2 in a 3-1 victory over the Toronto Maple Leafs Oct. 29, lifting Calgary to its first win in Toronto since Jan. 15, 2011. Monahan then recorded assists on both the tying goal in the final minute of regulation and the overtime winner in a 2-1 triumph against the Buffalo Sabres Oct. 30. He added 1-1—2 in a 6-5 victory over the Colorado Avalanche Nov. 1 before capping the week with two goals – his 15th career multi-goal performance – in a 5-3 win against the Chicago Blackhawks Nov. 3. The 24-year-old Brampton, Ont., native – who ranks second on the Flames with 8-10—18 this season (15 GP) – paces Calgary with 146 goals and sits second on the team with 299 points since making his League debut in 2013-14 (408 GP).

SECOND STAR – ELIAS PETTERSSON, C, VANCOUVER CANUCKS
Pettersson shared the League lead with four goals and ranked third overall with seven points in three games to also power the Canucks (9-6-0, 18 points) to a perfect week. He scored twice, including his first career game-winning goal, in a 5-2 triumph over the Minnesota Wild Oct. 29. After being held off the scoresheet in a 4-2 victory against the Chicago Blackhawks Oct. 31, Pettersson rebounded with five points (3-2—5) – including the tying goal with 35.9 seconds remaining in regulation and the primary assist on the overtime winner – in a 7-6 triumph over the Colorado Avalanche Nov. 2. At 19 years, 355 days, Pettersson became the youngest player in Vancouver history to record a five-point game as well as the first rookie in franchise history to achieve the feat. The Sundsvall, Sweden, native – who tops all rookies in goals and points this season (9-6—15 in 9 GP) – is one of just 16 players in NHL history with at least nine goals in his first nine games.

THIRD STAR – BRAYDEN POINT, C, TAMPA BAY LIGHTNING
Point led the NHL with six assists and ranked second overall with eight points to lift the Lightning (10-3-1, 21 points) to three wins in four contests and into first place in the Atlantic Division. He collected 1-4—5 in an 8-3 victory against the New Jersey Devils Oct. 30. At 22 years, 231 days, Point became the youngest player in Tampa Bay history to record a five-point game. After being held off the scoresheet in a 4-1 loss to the Nashville Predators Nov. 1, Point bounced back with one assist in 4-1 triumph over the Montreal Canadiens Nov. 3. He closed the week by scoring the tying goal with 26.4 seconds remaining in regulation and then assisting on the overtime winner in a 4-3 victory against the Ottawa Senators Nov. 4. The Calgary native paces the Lightning with eight goals and 17 points through 14 games this season.