* The underdog trend continues in the 2019 Stanley Cup Playoffs as the Avalanche became the second team to knock off their conference’s No. 1 seed in the opening round.

* Overall, lower-seeded teams have a 21-15 record this postseason, including two that have already advanced to the Second Round: Colorado and Columbus.

* Auston Matthews and Kasperi Kapanen scored 2:12 apart to help the Maple Leafs move within one win of advancing past the opening round for the first time in 15 years.

ANOTHER NO. 1 SEED FALLS AS AVALANCHE ADVANCE 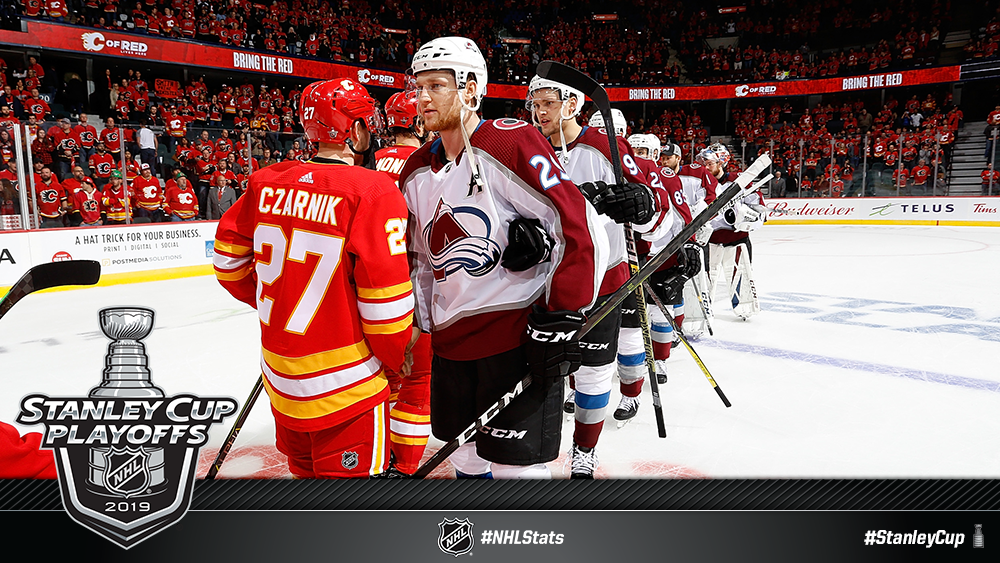 * Dating back to expansion in 1967-68, there have been a number of playoff formats: division-based, conference-based and for two seasons (1979-80 and 1980-81) the top 16 teams were seeded by regular-season points. The 2019 Stanley Cup Playoffs marks the first time the top two teams in each division or conference or the teams with the two best records have been eliminated in the opening round.

* The Avalanche, who won their first playoff series since 2008, will face either the Sharks or Golden Knights in the Second Round (VGK leads series 3-2).

Friday’s contest marked the first time in Avalanche/Nordiques franchise history that four players each recorded three points in a series-clinching game. Additionally, it marked the 10th such occurrence in NHL history and second in as many seasons after Jake Guentzel (4-1–5), Patric Hornqvist (1-2–3), Sidney Crosby (1-2–3) and Kris Letang (0-3–3) all did so for the Penguins in Game 6 of the 2018 First Round vs. the Flyers.


* Rantanen extended his multi-point game streak to four contests (5-4—9), one shy of the Avalanche/Nordiques franchise mark in the postseason set by Peter Stastny in 1982 and matched by Peter Forsberg on three occasions.

The Maple Leafs scored two third-period goals in a span of 2:12 to take a 3-2 lead in their best-of-seven series with the Bruins. Toronto holds an all-time series record of 19-5 when leading a best-of-seven series 3-2 and moved within one win of advancing past the opening round for the first time since the 2004 Stanley Cup Playoffs.

* This marks the third time that Toronto has taken a 3-2 series lead against Boston in a best-of-seven series, with the two prior instances requiring seven games. The Maple Leafs won in seven games in the 1959 Semifinals while the Bruins rallied to a seven-game series win in the 1941 Semifinals.

* Kasperi Kapanen (1-1–2) netted his second career game-winning goal in the playoffs to give Mike Babcock the 90th postseason win of his career, eclipsing Glen Sather and Darryl Sutter for the seventh-most wins by a head coach in Stanley Cup Playoffs history.

* Auston Matthews opened the scoring in the final frame to extend his goal/point streak to three games (4-1–5). It marks the second time in three postseasons that he has recorded a goal streak of at least three games in the opening round (also Games 3-6 of 2017 R1).

* A new father after welcoming a baby girl into the world on Thursday, Maple Leafs defenseman Jake Muzzin was in the lineup on Friday and recorded the primary assist on Matthews’ opening tally.

The Blues look to advance past the opening round for the third time in four seasons when they host Game 6 against the Jets, while the Capitals-Hurricanes and Predators-Stars both contest Game 5 looking to break a 2-2 series deadlock.

* After capturing Games 3 and 4 at PNC Arena, the Hurricanes set their sights on taking a 3-2 series lead after losing each of the the first two games in a best-of-seven series for the second time in franchise history. The other: 2006 CQF vs. MTL.

* The Predators return to Bridgestone Arena for Game 5, where they have earned 31 of their 51 all-time playoff victories (60.7%). Meanwhile the Stars head back on the road, where they’ve won five of their last seven postseason contests, including Game 1 of this series.
at 4/20/2019