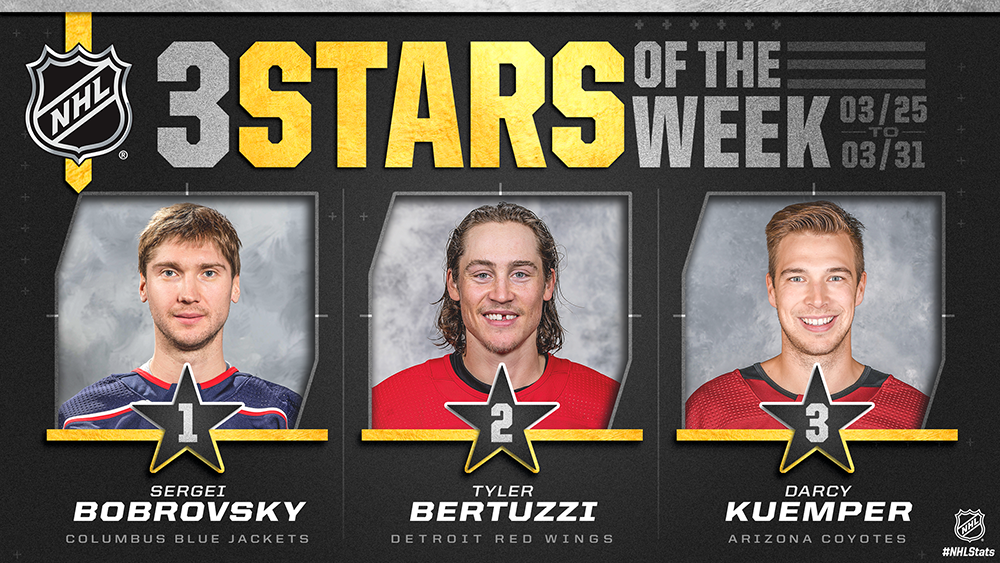 Bobrovsky went 4-0-0 with a 1.00 goals-against average, .966 save percentage and two shutouts to help the Blue Jackets (45-30-4, 94 points) extend their overall winning streak to five games and move into the first Wild Card spot in the Eastern Conference. Bobrovsky stopped all 26 shots he faced for his 32nd career shutout – and second straight (also March 24 at VAN) – in a 4-0 victory over the New York Islanders March 26. He made 26 more saves in a 6-2 triumph against the Montreal Canadiens March 28, lifting Columbus ahead of Montreal for the final playoff spot in the conference. Bobrovsky added 23 saves in a 5-2 win over the Nashville Predators March 30, followed by 38 stops – for his League-leading ninth shutout of 2018-19 – in a 4-0 victory against the Buffalo Sabres March 31. The 30-year-old Novokuznetsk, Russia, native and two-time Vezina Trophy winner ranks second in the NHL with 36 wins in 60 total appearances this season (2.55 GAA, .914 SV%, 9 SO).

Bertuzzi shared the League lead with 3-7—10 in four outings to power the Red Wings (31-38-10, 72 points) to a perfect week and their fifth consecutive victory overall. He collected one assist in a 3-2 win over the San Jose Sharks March 25. Bertuzzi then registered three straight three-point performances, posting 2-1—3 (including his first career overtime goal) in a 5-4 triumph against the Buffalo Sabres March 28, 1-2—3 in a 4-0 victory over the New Jersey Devils March 29 and three assists in a 6-3 win against the Boston Bruins March 31. In doing so, Bertuzzi became the first Detroit player to record three consecutive three-point games since 1992-93, when Steve Yzerman achieved the feat twice (Feb. 3-11 and March 5-10). The 24-year-old Sudbury, Ont., native has notched career highs across the board this season, ranking fourth on the Red Wings with 19-25—44 in 70 contests.