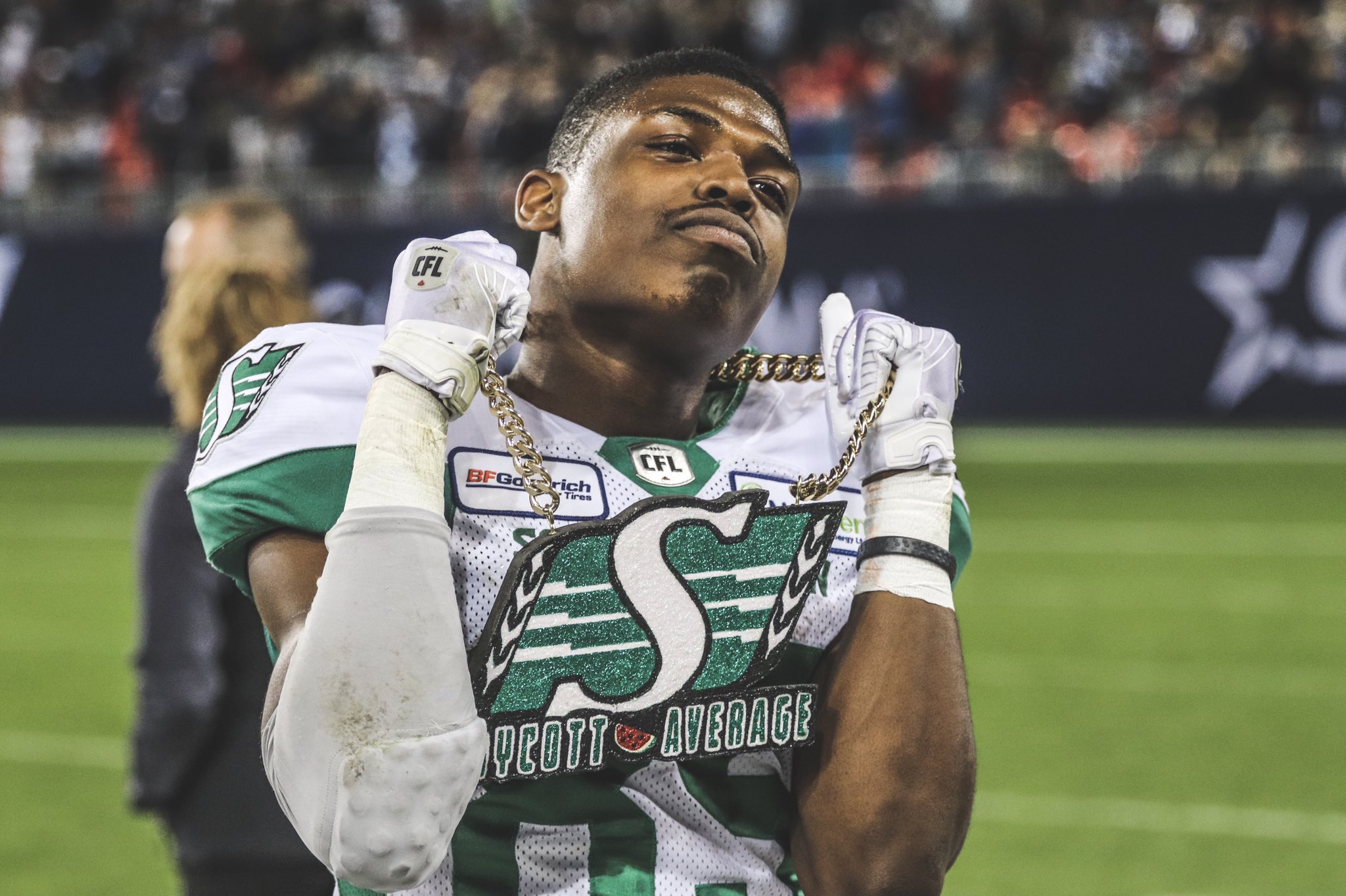 Now the real fun begins for Cody Fajardo and the Saskatchewan Roughriders.

Fajardo threw three TD passes and ran for another as Saskatchewan (9-4) clinched a playoff berth with a convincing 41-16 win over the Toronto Argonauts (2-11) on Saturday night. The Roughriders can determine where they finish in the West Division as their final five regular-season games will be versus conference rivals, starting with the Winnipeg Blue Bombers (9-5) next weekend.


"When you start the year you have a one-in-nine chance of winning a Grey Cup," Fajardo said. "Then you clinch a playoff spot and have a one-in-six chance.

The first-place teams in both divisions not only get opening-round playoff byes but also secure home-field advantage for the respective conference finals. Saskatchewan moved into a three-way tie for tops in the West with Winnipeg and idle Calgary (9-4).

After hosting Winnipeg, Saskatchewan visits Calgary and B.C. (3-10) before finishing home-and-home with Edmonton (7-7). Next weekend's contest with the Bombers is crucial because the winner clinches the season series, which is the tie-breaker if the two finish with identical records.

"It's a tough road ahead but I don't think we'd want it any other way," Fajardo said. "The cool thing is we control our own destiny.

"You always want to be able to be the driver of the bus and we're in that situation."

A heady accomplishment considering Saskatchewan lost starter Zach Collaros (concussion) on the third play from scrimmage in its season-opening 23-17 road loss to Hamilton.

"I think we have a resilient bunch," said rookie Riders head coach Craig Dickenson. "Cody played a tremendous game, he was so efficient.

"He saw the field well, really managed the game well and kept the guys in the huddle positive and moving forward. I think our team came together a little bit tonight and hopefully it continues."

Toronto linebacker Bear Woods said while Saskatchewan's offence has many weapons, it's Fajardo who makes the unit go.

"They did the things we'd planned for. Cody just executed on a high level."

Saskatchewan earned its seventh straight victory over Toronto and eighth in nine games overall. The Riders also improved to 5-0 coming off the bye the past two seasons and 6-2 this year versus East rivals.

Fajardo was 23-of-27 passing for 278 yards while rushing 11 times for 80 yards as Saskatchewan secured a playoff spot for a third consecutive year. And just for good measure, he found Emmanuel Arceneaux on a 55-yard touchdown pass with 6:39 to play to put the Riders ahead 34-10.

"I thought that was our best game to date," Dickenson said. "We didn't even think about the fact it would clinch us a playoff spot but they (Riders players) knew how important that it was."

Toronto (2-11) lost for the fifth time in six games and dropped to just 1-6 at home this season. James Franklin, making just his second start of 2019, was 21-of-30 passing for 209 yards with a TD and two interceptions while being sacked six times.

"It started with some good stuff but we didn't finish well at all," Toronto head coach Corey Chamblin said. "It wasn't just Fajardo, it was a (Saskatchewan) team win like it was our team loss.

"He's not carrying the team on his back. It's several guys doing their job very well."

"If you look at James it looked like his first start," Chamblin said. "There were times when you saw flashes where he used his legs but overall it was not successful."

Franklin started Toronto's 32-7 road loss to Saskatchewan on July 1 but suffered a hamstring injury in that game. McLeod Bethel-Thompson took over under centre, posting a 2-8 record.

Fajardo had 430 yards passing with two TDs while running for another in the home win over Toronto. On Saturday night, he cemented the win for Saskatchewan with a touchdown pass, then run, in the third.

Fajardo found Shaq Evans on an eight-yard strike just 4:28 into the frame after Nick Marshall recovered a Chris Rainey fumble at the Toronto 27-yard line. Then Fajardo capped a 66-yard, nine-play scoring march with an eight-yard touchdown run at 10:23 to give Saskatchewan a commanding 27-3 advantage.

"I thought that's when we pulled away," Dickenson said. "I give a lot of credit to our conditioning coach, Clint Spencer.

"We work hard in the weightroom, we work hard with our guys running. I feel like we're in good shape but it helped coming off the bye. We were fresh and well rested."

Tyler Crapigna booted a field goal and convert for Toronto.

Dominant performance. Playoffs start now though with Winnipeg, Calgary, BC, Edmonton, Edmonton to end things off. Don't know if they can go to Calgary and win, but they should be able to win the others.


Fajardo showed himself off as a running/passing quarterback tonight. He can be very dangerous to other defenses.

Get this guy signed O'Day!

Riders have proven me and a lot of fans wrong this year. After Collaros got hurt on 3rd play of the season, I thought the year was a write off. Good job to the Riders. As for the Rams, good lord, what a collapse of season after that great week 1 win.

Very enjoyable watching the narcissist Corey Chamblin get his butt kicked even though it's everybody else's fault.