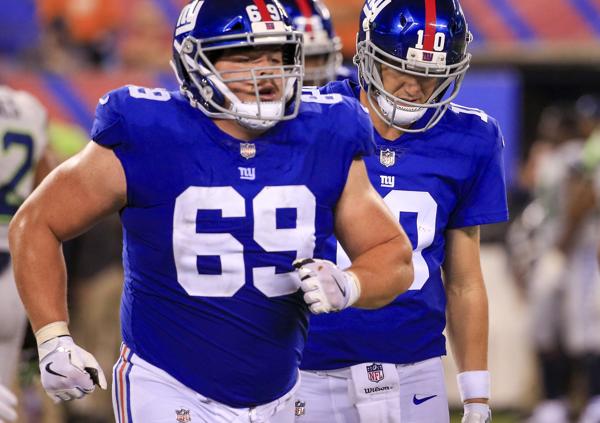 Brett Jones is determined to re-sign with the New York Giants and continue serving as their starting center.

Jones took over midseason for injured starter Weston Richburg and arguably performed better at the pivot for the Giants. According to Pro Football Focus, Jones finished with the fifth-best pass blocking efficiency of all NFL centers in 2017.

“I just want to keep being the starter,” Jones told Giants.com. “That’s all I want to do. I want to be able to keep playing. It’s just so much fun, and I’m looking forward to that.”

Jones is a restricted free agent and the Giants will likely be able to retain his rights for relatively cheap considering his recent string of impressive games as the starter. Jones has also played guard during his career with the Giants and earned a positive grade from Pro Football Focus during his stint. Jones may be undersized at 6-foot-2 and 309 pounds, but he plays with great technique and that has carried him thus far throughout his NFL career.

Before signing with the Giants in 2015, Jones earned the CFL’s Most Outstanding Offensive Lineman in 2014 with the Calgary Stampede. An injury derailed Jones' 2015 season, but he performed well in 2016 and 2017 with the Giants when given the opportunity.

“Just to get the experience to play and get out there and get in those games was invaluable for me,” Jones said. “And I really look forward to keep getting better as a player and hopefully keep staying in there.”