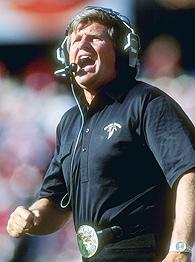 “Jerry is one of the best defensive minds and one of the great motivators in the game of football, and we’re excited to have him come on board with the Ticats,” said Jones. “I played for Jerry, coached for Jerry, and he has coached for me. We think alike and he has been a big influence on not just me, but the game of football itself. The Hamilton Tiger-Cats and the CFL just got better.”

Glanville, who spent the 2017 training camp with the Tiger-Cats and has vast experience in the coaching ranks spanning more than 30 years, has consistently produced excellent defensive football throughout his career. He has served as a head coach for over 12 years, including stints in the National Football League with the Houston Oilers (1985-89) and the Atlanta Falcons (1990-93). The native of Perrysburg, Ohio, has also served as a defensive coordinator for numerous teams, including in the NFL with Atlanta (1979-82) and Houston (1985-89).


Why? What does Jerry Glanville know about defense in the CFL? First, he tries to give Art Briles a job and now this. C'mon Bob Young, put your two cents in on this!