New Uniforms for the Regina Pats 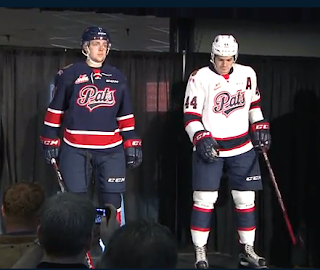 The Regina Pats Hockey Club unveiled new home and away uniforms Thursday morning.  The redesign comes after almost a year of planning.

“These new uniforms are meant to reflect the new direction for Regina Pats hockey,” said Pats President Todd Lumbard.  “We are working to build a first-class organization on and off the ice and this uniform complements just that.”

The biggest change fans will notice is the colour.  The new design continues to use the red, white and blue colour scheme but the royal blue has been replaced by a darker navy blue.  The navy enhances the contrast with the red and white for a more modern, crisp and impactful uniform.

Other changes include repositioning the red bar along the bottom and unifying the colour scheme between the shoulder and the rest of the jersey.

According to the Pats’ Todd Lumbard, “In speaking to stakeholders it was clear we needed to pay respect to 98 years of heritage in whatever design we came up with.  In the end, we wanted to create something that is modern without being trendy or edgy.  It also had to be timeless.”

The team debuts the new uniform this weekend during home games against Brandon and Calgary.

The Neutral Zone Authentic Pats Sportwear has special hours on Friday from 11 a.m. – 4 p.m. and Saturday and Sunday beginning at noon, until the end of the games, for anyone wanting to purchase a jersey.