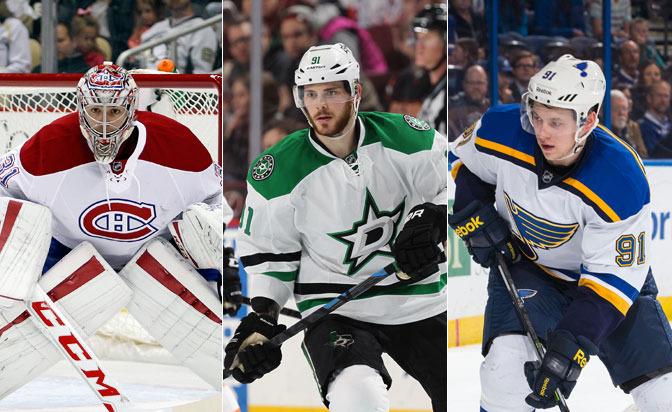 Price went 3-0-0 with a 1.00 goals-against average, .963 save percentage and one shutout to backstop the Canadiens (6-0-0, 12 points) to three wins, leading the team to its best start in its 98-year NHL history. He began the week with 31 saves in a 3-2 victory over the Pittsburgh Penguins Oct. 13. With the win, the Canadiens became the third team in League history to begin a season with a 4-0-0 record, with all four of those wins coming on the road (also 1965-66 Chicago Blackhawks and 2001-02 New York Islanders). Price then stopped all 25 shots he faced to record his 35th career shutout (fourth in franchise history) in a 3-0 triumph over the New York Rangers Oct. 15. He closed the week with 21 stops in a 4-1 victory over the Detroit Red Wings Oct. 17. The 28-year-old Anahim Lake, B.C., native – and reigning Hart Memorial Trophy, Ted Lindsay Award, Vezina Trophy and William M. Jennings Trophy winner – has posted a 5-0-0 record with a 1.20 goals-against average, .957 save percentage and one shutout in his first five appearances this season.

Tarasenko notched 3-3—6 and a +6 rating in four games to lift the Blues (5-1-0, 10 points) to four consecutive wins. He collected one assist in a 4-3 victory over the Calgary Flames Oct. 13 and scored one goal in a 4-2 triumph over the Edmonton Oilers Oct. 15. Tarasenko then finished the week with a pair of multi-point performances: two assists in a 4-3 win over the Vancouver Canucks Oct. 16 and two goals, including the decisive tally, in a 4-2 victory over the Winnipeg Jets Oct. 18. The 23-year-old Yaroslavl, Russia, native has registered at least one point in each of the team's opening six games of the season, sharing the League lead in goals (5) and points (9).
at 10/19/2015