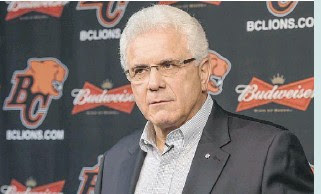 BC Lions owner David Braley along with president and CEO Dennis Skulsky today announced that VP of football operations, GM and head coach Wally Buono has signed a contract extension to 2018.

Buono, who relinquished the team’s coaching reins following the Lions’ 2011 Grey Cup championship season is set to return to the sidelines in 2016.

“Wally’s incredible accomplishments as a coach and football executive are well documented,” said Skulsky. “He is among the greatest coaches in the history of our league and he gives us the best opportunity to win a championship. Most importantly, Wally has the respect, belief and trust of our players.”

Buono, the CFL’s all-time leader in coaching wins with 254 (101 with BC), was inducted into the Canadian Football Hall of Fame in 2014 following a 22-year coaching career in Calgary and BC. Coming to the Lions in 2003, he has led the club as GM and head coach to nine previous playoff appearances, six Western Finals, one Eastern Final, three Grey Cup games and two league titles (2006, 2011).

“My sincere thanks go out to David and Dennis for the confidence they have shown with this extension,” said Buono. “We have a big job ahead of us, but with the coaches, football operations staff and players we are assembling I believe we will put a product on the field that our fans will want to support.”

Next up for Buono will be to put the finishing touches on his football operations department ahead of the club’s attendance at this year’s CFL Regional Combines in Edmonton and Montreal next week as well the main CFL Combine slated for March 11-13 in Toronto.
at 3/02/2016

I can't wait to yell "GET OFF THE FIELD WALLY" again!

Are the Lions stuck in some sort of time warp? I don't see this helping them at all.