The Hitman Returns To The WWE 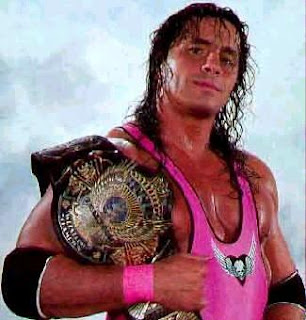 The man who is the best there is, the best there was, and the best there ever will be is returning to the WWE. Bret Hart has agreed to a contract that will take effect January 1 and run until just after Wrestlemania in mid-April. What role he will have is unclear, but it is known he will make his first appearance on January 4. That coincidentally is the same night Hulk Hogan makes his debut on TNA which has decided to go head-to-head with RAW on Spike.
Those that know Bret Hart, (and many of us do) know his first reign with the WWE came to an explosive end in Montreal when he was screwed out of the belt at Survivor Series. Hart was about to leave to then competitor WCW and wanted to voluntarily hand the belt over the next night, but Vince McMahon had a little surprise for everyone that night.

I don't know about you, but seeing "The Hitman" back in the WWE is outstanding. I am hoping he doesn't get into the ring as a competitor as I don't know if he can withstand the physical punishment that one takes---especially for someone who has had a stroke. I am guessing he will be a general manager or something----who may throw the odd punch or two. I am hoping Vince is on the receiving end of one of those punches.

He's my second favourite Wrestler, but he's not going to have an impact. Brett was picked to carry the WWF when there was the steroids scandal. His great autobiography states he was doing them to, but he wasn't in the same realm as a Hogan, Warrior, etc. He was picked due to his work rate, and technical skills.

The reason he's not going to make an impact is because over the long term his mic skills can not carry the day. Roddy Piper, Hulk Hogan, Dusty Rhodes, Terry Funk, Sean Michaels, and Ric Flair were the greatest of all time. They can use those skills to keep getting over with the crowd. Brett can't do that. He was better than a Chris Benoit, but far below the guys mentioned above.

However it'll be great to see him. My favourites were Ric Flair both NWA/WWF, Brett Hart, Terry Funk NWA/ECW, Dusty Rhodes NWA, and Hulk Hogan WWF/WCW.

I have always been a fan of Brett's and held him in high admiration both during and after his days in the spotlight. Unfortunately it looks as though Owen's life & memory did have a price tag attached after all and Vince was able to pay it. I'm disappointed. Kinda turns those tragic events into a work doesn't it?
Ted Y.