Its The Most Wonderful Time Of Year My Ass!!

I hate shopping at the best of times. I think I speak for most guys when I say that. I hate Christmas shopping--especially as the days near closer to the 25th. It’s because everyone is out there ignoring those around them as the self-centered mentality comes to the foreground for many.
I've done a lot of my shopping already, but with the wife having today off, she wanted to go get things so away we went. I knew it would be a day that would end with the nerves being frayed and the temper being short, but a guy has gotta do what a guy has gotta do so it was off, off and away.


One of the best things about Christmas shopping is finding a parking spot. This is where it starts. 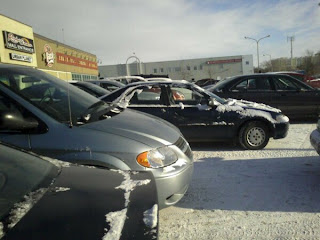 Look at this jackhole ladies and gentlemen. He or she apparently believes this little piece of crap car is so important that it can take up two rows. Is this really necessary? Does he or she know this is being done when the park is made and if so, what is going through this person’s mind?


The same can be said with the driver of this truck. 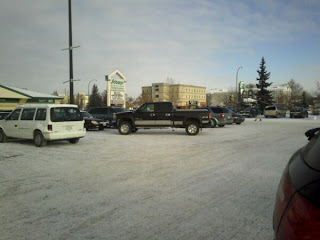 Again, are you that important that regular parking rules don’t apply to you? Are you cognizant of the fact that most spots in the lot are taken, but you are one that feels the need to take three? I guess as long as you get that special at the grocery store all is good right? I thought so!

Then you get inside the store. People are shoving their way past you, others sit and stare at an item thinking it will magically jump into the shopping cart that is blocking you and others from getting by. You are seemingly in a hypnotic trance as you look at whatever. Does one of what you seek have a gold bar inside it? Is there treasure in one of these boxes of Corn Flakes that you are staring down? Grab the item you seek and move on. If staring isn't the thing for some, its the conversation. You know what I'm talking about. Its the twosome that haven't seen one another for a while. Each has a shopping cart and as the conversation starts, the zoning out begins. No one will care if we talk about the past with our carts or our bodies basically interrupting the flow of traffic. Our meagre little lives and the stories we are telling is more than enough reason to hold up everyone from doing what they want to do. ARRRRRGHHHHHH!!!!!

You all know what I'm talking about, because you all see it--especially now. It is maddening and it will only get worse as the days and nights tick down to Christmas morning. The rush in the malls is only going to get worse. Those lineups at the till won't be shortening anytime soon. Those people in a rush to get their shopping done will do whatever they can, annoying whoever they can just as long as they get what they want.

An ethical question also popped up. While in one of the big box retailers, I am absolutely positive that I saw a man grab something off a store shelf and put it inside his coat. I told the wife about it and she said "let someone know". I couldn't tell what he had grabbed. What if it was his wallet, his cellphone, etc. etc. and he gets nabbed and it was nothing. How dumb would you feel and how pissed would he be? On the other hand, what if he was stealing something? I let it be, but I wonder if I should have.

The only highlight of the day(besides the fact I am now done my shopping for this year with the exception of stocking stuffers that can be picked up at a less than crowded Shoppers or London Drugs was this. 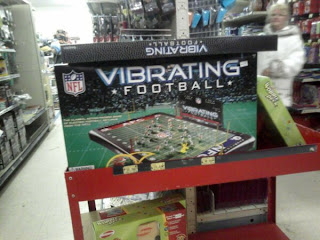 Yes, long before the advent of the Wii or the Xbox or the Playstation or the Intellivision (do you remember those?) was things like this. Its football's version of rod hockey. I had a CFL game when I was a kid. It had the logos of all the teams on the side including the vintage Alouettes and Riders of both Saskatchewan and Ottawa. You could design the play all you want, but those damn little men weren't going to go the way you wanted them to because of the vibrations. The quarterbacks were so much taller than the players. I loved that game! I didn't think they made things like this anymore. They do. Its somewhat relatively new too as all 32 NFL teams are on here. Something deep down says I should really go back on Boxing Day or later and plunk down the coin for this. I might only play it once or twice, but damn it would be fun. If they could give a rod hockey game and pay 2 for 1, I'm in!!

Anyhoo, as I said, my shopping is now done. The wife can tangle with the malls and the parking headaches and battling fellow citizen for this and that. I will sit at home and watch football or whatever(while hoping all those vibrating football games don't sell)Oh yes, I do have to head out and get a couple of other things, but I don't need to go to the mall to get those things.

One of these years I will learn to either do my shopping online or do it in September and October, but until then I will have to endure more days like today. Someone pass me a beer!!! Damn it, it better be cold!

It's not just at Christmas when people park like that. You should still park close to them and give them a door ding just to set them off. I hate people like that!

Its the bluehairs that drive me crazy. They can't drive, they get in my way and they always manage to buy something that doesn't have the pricetag on it thus creating long lines in the checkout line. Just let your wife do the Xmas shopping, it saves a major league headache.

HA HA HA! I can see you fuming all day long. Santa will leave you coal in your stocking if you keep acting like this.

I don't know about vibrating football cuz the guys will never do what you want(ie: the Toronto Argonauts), but I remember those table hockey games. They were the coolest. My friends and I would play that game endlessly. You had to use a marble instead of a puck though.
I still play them whenever I see them at bars or whatever (Canada vs USA)

Mitchell Blair
This is mainly a Regina sports blog, but you will get information and thoughts from me on a number of topics some that aren't even sports related. You can see me on Access 7 in Regina co-hosting a local one hour sports program called Locker Talk highlighting Regina sports. You can hear me reading afternoon news and sports on 620 CKRM in Regina along with co-hosting "Sportscage" on same station from time to time. I'm also a part of Sask Roughriders broadcast on CKRM and I write feature articles for the Riders on their website Riderville.com.