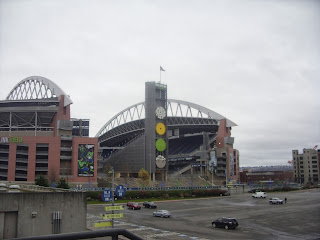 You can take me to the 31 other stadiums in the NFL, any college one or the 9 CFL stadiums (including our own Mosaic Stadium) and it will never, ever be like what it was for Monday Night Football as I witnessed my beloved Seahawks for the first time in their digs that stands where the Kingdome once did and where I last saw the team play on home soil.

While I have not been to every stadium, I would find it hard-pressed to beat the environment surrounding Monday Night Football,  Here's just a snapshot or two of what was absolutely a tremendous weekend.

We were able to go on a tour of the facility Saturday afternoon and while there are some pictures I'd love to show you---I can't due to my damn Blackberry screwing up on me at the worst possible times, but there are enough here to give you a pretty good look at what this place is all about. 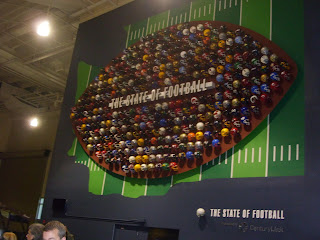 This greets you as you walk into the stadium right near the Seahawks pro shop. It features the helmets of every team that plays high school, University and pro ball. I would love to see something like this at the new facility when it is built. 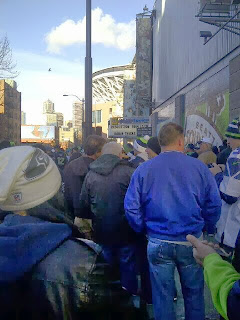 ﻿
Its three hours before kickoff and the area is jammed. Did anyone work in Seattle on Monday? I asked a police officer what its like with the Seahawks playing on a Monday instead of a Sunday.  He rolled his eyes as he pointed a fake pistol to his head. He'd rather have the team keep playing Sundays instead of Mondays or Thursdays. I can't imagine why. 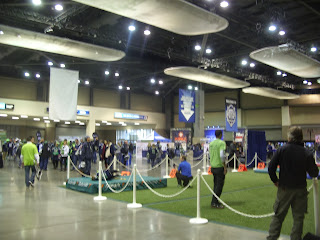 The people were in line to get into "Touchdown City". The great thing about this place is you don't need a ticket to get in. Its right beside the stadium and it offers something for everything. It opens three hours before the game starts and with 30 minutes to go, people without tickets are told they have to exit through one door while those with tickets can go to their gates or through another door into the stadium. 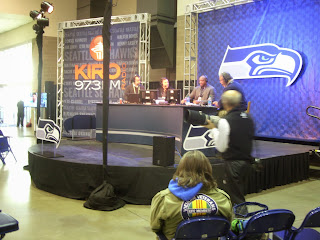 The radio pre-game show is on the air live from Touchdown City!! 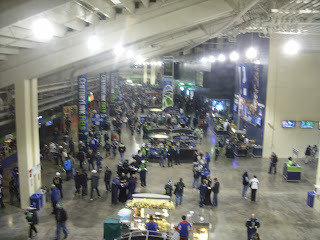 Kickoff is over an hour away and the people just keep coming and coming and coming. Believe it or not, I don't think you can get into the stadium if you aren't wearing the Seahawks logo somewhere on your body. 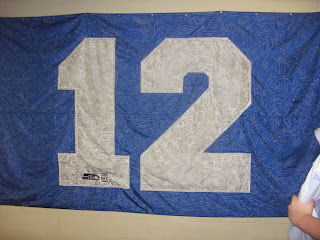 The 12th man flag sits outside the Seahawks dressing room door and is on the wall by the tunnel from which they emerge. This flag was signed by thousands of Seahawks fans and the team ran underneath it when they played in Super Bowl XL and were jobbed by Bill Leavy as the NFL wanted to give Jerome Bettis his Super Bowl. I will always be bitter on that, As I found out this weekend, others share my sentiment. 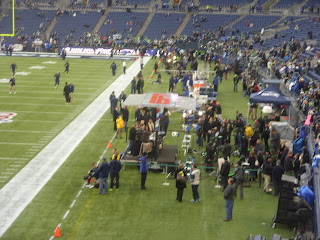 Chris Berman and his crew are getting ready to bring the game into your living room from his studio in Bristol, Connecticut on ESPN. He has some help from Stuart Scott, Mike Ditka. Ray Lewis, Trent Dilfer and Steve Young. 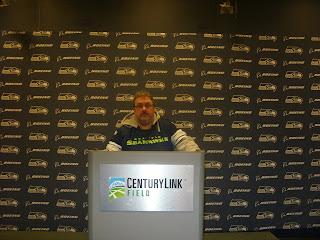 Seahawks coach Pete Carroll and quarterback Russell Wilson will speak from this podium after the game to the assembled media. So this is what it looks like from other side. 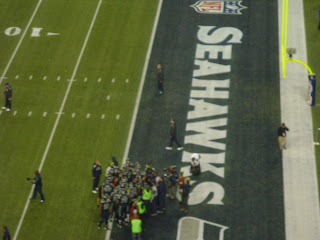 Some of the team gather before going back inside for the last word from the coach! 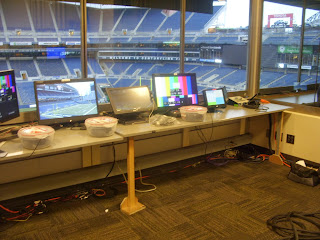 The national TV booth is ready. This is where Mike Tirico and Jon Gruden called the game Monday. When do those guys get to the stadium? Who's kidding who---a photo op with Tirico and Gruden would have been awesome.
That's about it. As you know, the Seahawks demolished the Saints and gained the respect of many who believe Seattle will be playing in New York City for the Super Bowl thanks to quarterback Russell Wilson and a defence that makes you fight for the yards you get.
I just can't say enough about the stadium and other things I learned.
--Standing in the corner of the stadium about 40 of us yelled, it just echoes throughout the place
--The fans stood the entire time New Orleans had the ball in the 1st quarter. I thought I might never sit down, but the fans get real quiet when Seattle breaks out of the huddle. These guys know what's going on and there is no wave either. They even let the cheerleaders dance instead of doing something dumb like "The Last Saskatchewan Pirate."
--The Rider Nation was represented in more than one section. I did not wear green---I wore my Seahawks 12 jersey. Would you expect anything different?
--Before the game, the opposing team gets a police escort from their hotel to the stadium and they also get one to the airport immediately after the game------this of course after they eat a buffet style meal outside their dressing room. Does that happen in the CFL? That just made me shake my head.
--With all apologies to Rider fans, there is nothing like this at or before game day. You have to see it to experience it first hand to know what I'm talking about. I know the Riders have seen this stadum up close and personal too and I hope they bring a lot of CenturyLink to the new facility. The 13th man deserves it just as much as the 12th man in Seattle.
--Seattle could care less about hockey. I don't think the NHL needs to put a team in there. It was tough just finding hockey merchandise.
--Seattle is the birthplace of Starbucks and other coffee houses, yet this coffee drinker of about 3 per day had zippo while there.
--At one point, the Seahawks would put TV's that sit in the opposition dressing room about 9 feet off the ground hanging from the roof. They would put in some god-awful channel and hide the remote. This would force the opposition to A) decide whether or not to change the channel or turn the TV off and then find a step ladder to do so.  or B) Ignore it and play on. Our guide leader told us NFL teams have a variety of doing things and you have to be careful about what situation you put yourself in at the stadium. The NFL is cracking down on a lot of things including the TV hijinx in Seattle. One team also dressed their entire dressing room in pink in an effort to soothe the nerves of the raging visitors. The NFL put a stop to that to.
--There's nothing but positive talk in that town about their team. THey have two defensive backs who may not play again this year because they have violated the substance abuse issues, but they just keep rolling. There is a thought process this team is on its way to the Super Bowl, I am a fan, but I can't disagree and either can their p x p guy Steve Raible.
--Its hard to describe just how loud it can get in there. If its that loud in the seating area, I can't imagine what its like at field level. As I said, it is something you have to experience to believe it for yourself.  Seahawks fans did set a world record for loudest stadium and in the first half, the University of Washington's seismic monitor registered five earthquakes with a magnitude of 2.0 as the 70-thousand constantly made the building shake. If that doesn't give you an idea of what its like in there, I don't know what does.
--That's all I got. Get to Seattle and watch a game. You'll enjoy it all win or lose and we know that means wins. ﻿
﻿
﻿
﻿

I've been to two games there in the last five years and the electricity in and around the stadium is second to none. It beats any CFL game I have gone to and I have been to over 100 in just about every stadium.

You sure picked a night where the Seahawks played their best.

Love the state of football display. Something like that would look great at the new stadium.

It looked cold there!

I was there too Scruff! I didn't go on the tour, but I can vouch for the loudness and the game day atmosphere. Hoppy and his crew should come down here with notepad in hand to see how to make the gameday experience better at the new facility. TD City is incredible.