Holidays are just about over and the time to head back to Harvard headquarters in downtown Regina is just about upon me. Has it been two and a half weeks already? Jeez!!! Is one ever ready to go back to work when his holidays end? While you ponder that, here are some questions and thoughts running through my muddled brain.

The first thing isn't really a statement or a thought, but a damn good read and it comes courtesy Hamilton Tiger-Cats owner Bob Young. There are passionate guys in this league, but perhaps none moreso than Mr. Young who I think left perhaps an even more favourable impression on the many people he encountered at this year's Grey Cup. Young has written a very good piece on his blog about the NFL-CFL wars and how Toronto's presence in the NFL is not needed. You can find the piece by clicking on this sentence.

I'm not the only one across this great country of ours who have tried to figure out a protected list or act as GM of their favourite football team as the Ottawa REDBLACKS (do I really have to capitalize it?) get ready to create a roster. As you know, teams can protect 6 Canadians and 10 imports along with a quarterback.

The quarterback is no mystery as Darian Durant will be protected unless Brendan Taman, Jeremy O'Day and the rest of the braintrust have some kind of brain aneurysm. The six Canadians I would protect in alphabetical order are

The Americans would be

In the end, the Riders and the seven other teams are each going to lose three good football players. One import and two Canadians. That import could be a guy like Eddie Russ, Carlos Thomas or the somehow seemingly forgotten Abe Kromah while the Canadians who will head East could be a Zack Evans, Sam Hurl or Dominic Picard.. If a quarterback is to be taken, don't be surprised to see that QB be Tino Sunseri and not Drew Willy.  It will be a very interesting Monday that is for sure.

By the way in case you're wondering why I would protect Dressler and not Kory Sheets. Sheets has basically stated he is coming back to Regina if his NFL workout fails. As for Dressler, he hasn't gone anywhere as of yet and if I am the Riders, I want to keep his rights right up until the day he becomes a free agent.

---
As was the case when others left the Riders to try out for the NFL, I have heard some ill words come from some. CMON PEOPLE!! 13 and 14 year old hockey players don't grow  up in this country wanting to play in the American Hockey League, they want to play in the show. The NFL, like it or not is the show. I am guessing there is not one American born player in a CFL dressing room that would love an opportunity to play in the NFL or have had one. Its what they want to do. If Weston Dressler gets a chance to go, good on him and I hope he succeeds. The same for Kory Sheets in Indianapolis or wherever. In the end too, its good for the CFL. Our league is getting noticed more and more. Yeah, its sad to see stars leave and I understand that, but its also great to see a guy like Jerrell Freeman or Jon Ryan or Cam Wake and go he's ours.
-----
I don't know who thought up of the "Teddy Bear Toss" across WHL arenas, but that person came up with an idea that is simply gold. I hope that is a promotion that goes for a long, long time.  Many years ago my daughter was sick and the nurse brought her a couple of bears because she had to stay in the hospital. The nurse told me they had lots of bears thanks to the Pats and other donations that come in. That story has been replayed many times over with many kids smiling at a time when they are likely scared out of their tree.
-----
Whatever happened to the Teddy Bear Bash they used to have behind the TC Douglas building? I always thought that was a great event too as kids got to see what happened if for some reason they went to the hospital. Someone needs to bring that event back!
----
The Texas Rangers drafted Seahawks quarterback Russell Wilson this week. They might as well had drafted me, What a waste of a pick. I don't think Russell will be playing baseball anytime soon.
----
The Denver Broncos really need to tighten it up defensively if they are going to win the Super Bowl.
-----
Week 15 NFL Lock Of The Week ---  Lions over Ravens
Week 15 NFL Upset Of The Week --- Browns over Bears
----
Mrs. Scruffy says she has no interest in seeing "Anchorman 2". Like men, she has no taste in movies either. This could be somewhat problematic.
-----
If John Cena is ever going to turn heel in WWE, this will be the time. The ending of RAW Monday gave us a sign he might perhaps be working with "The Authority". Am I the only one that wants to see a bad Cena for at least a couple of months?
-----
They have heated sidewalks in Iceland. If they can have heated sidewalks in Iceland, can we not have them in Saskatchewan. What's the cost on that! Can they have heated roads? OK, that's a little much.
----- 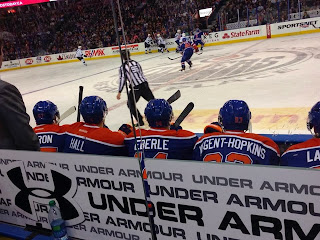 I knew I should have taken that "Phil Andrews Sucks" sign with me. Dammit! Opportunity wasted. Just kidding Philsy!!------or am I?
I just realized its Friday the 13th. ACKKKKKKK!!!!
Florida State's kicker had 147 points this year. The Seminoles gave up 139 total points. That's impressive!
Rod has decided to be grinch-like to faithful Sportscage listeners. He is putting the show in my hands for the rest of the calendar year so get ready for 2 1/2 hours of me daily starting Monday. Sorry! I have no idea what we're going to talk about. Hmmmmmm.
Be careful who you call your friends. I'd rather have 4 quarters than 100 pennies.
Have a great weekend!!
﻿

I don't really disagree with your list, but I would try and keep Picard as well. The center is the anchor and I don't think Watman is ready to step in.

I also wouldn't be surprised if Sunseri is taken by Ottawa. He looked very poised in the limited game action he saw. If he stays, it wouldn't surprise me to see him at number 2 behind Willy if he is still here when camp starts.

Is there any rhyme or reason behind Ottawa's picks? Do they start with one team and go to the next or is it just whoever they decide to go with?

If protecting Anderson, you might as well protect old man Simon too.

Not often you and I agree Mr. Blair, but our protected picks do.

Very interesting article by Bob Young today. He is wrong about Canadians not valuing Canadian Culture. It's Toronto and its low esteem and its inferiority complex regarding Americans. For them the Americans love the NFL but don't follow the CFL therefore the Toronto Media and the Toronto brainwashed believe it is not worthy of any attention.The R.O.C know better.
Robert

No way Ti-Cats take Tino. They will not waste a pick on a QB who has played 4 quarters (or less) in the CFL. They will rely on their own US scouting network to find a QB with the "potential" that Tino possesses.