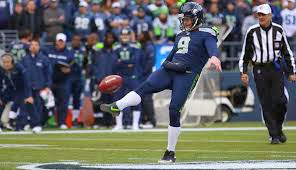 Punters are still football players too.

That’s the sentiment echoed by Seattle Seahawks punter Jon Ryan in the aftermath of Cincinnati Bengals punter Kevin Huber being lost for the season to a broken jaw suffered against the Pittsburgh Steelers on Sunday night.

The league considers all punters and kickers to be defenseless players, even if they are attempting to make a tackle. Dean Blandino, the league’s vice president of officiating, confirmed the distinction on Tuesday.

“Huber, he’s a punter. And the key is he’s defenseless throughout the down,” Blandino said. “So even though he’s pursing the play, he still gets defenseless-player protection. You can’t hit him in the head or neck, and you can’t use the crown or forehead parts of the helmet to the body.”

“Once you go down there and kind of get in on the tackle, I think you’re fair game,” Ryan said.

Ryan agrees that the shot Huber took from Steelers linebacker Terence Garvin wasn’t a clean shot but that doesn’t make him feel as though punters should receive special protection on the field.

“It’s just the way in which he hit him – that was not something I think should be part of the game. But when I go in and try to make a tackle, I think I’m fair game – I’m part of the play. You just hate to see something like that happen to the guy in Cincinnati. It’s pretty rough.”

Ryan and the Seahawks’ punt unit have been stellar this season. As a team, they’ve allowed just 19 punt return yards through 14 games. They are on pace to potentially break the record for fewest punt return yards allowed in a season and Ryan’s punting has been a major factor why.

He’s had to make tackles before – like a shoestring tackle of Devin Hester in the 2010 playoffs to save a potential touchdown – and if called upon again he’s more than willing to put himself in harm’s way. His positional designation doesn’t make him any less willing to make a tackle.

“I don’t think you should just punt the ball and walk off the field. You’re still a football player. I’m not trying to say that it was a clean hit by any means, but once a punter goes down there, he’s fair game,” Ryan said.

Damn punters, you see what happens when you get in the way of a real football player, a broken jaw.

The NFL says a punter is defenceles through the whole play. Cmon!! That's stupid!

Jon Ryan has been on two viral youtube videos the past couple seasons for getting destroyed on punts.