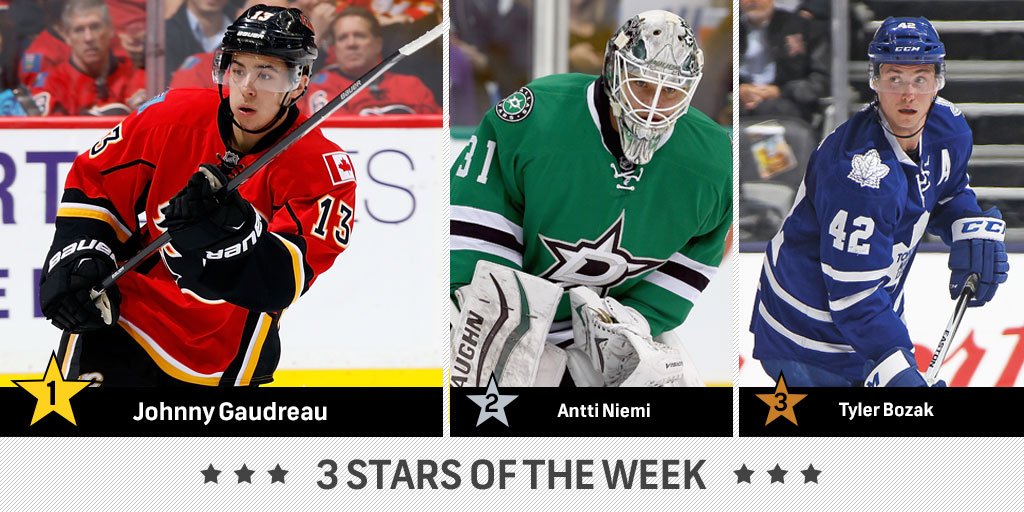 FIRST STAR – JOHNNY GAUDREAU, LW, CALGARY FLAMES
Gaudreau led the NHL with five goals in two games to help the Flames (17-16-2, 36 points) set a franchise record with their 11th consecutive victory on home ice. He opened the week with his third career hat trick – and second of the month (also Dec. 4 vs. BOS: 3-1—4) – in a 4-1 triumph over the Winnipeg Jets Dec. 22. Gaudreau then scored twice, including the game-winning goal, in a 5-3 comeback victory over the Edmonton Oilers Dec. 27. The 22-year-old Salem, N.J., native paces the Flames and shares sixth in the NHL in both goals (17) and points (39) in 35 appearances this season. His five game-winning goals are one shy of the League lead (Joe Pavelski: 6).

THIRD STAR – TYLER BOZAK, C, TORONTO MAPLE LEAFS
Bozak ranked second in the NHL in both goals (4) and points (tied-5) to power the Maple Leafs (13-14-7, 33 points) to two victories in three starts. He recorded his second career hat trick, including the game-winning goal, in a 7-4 triumph over the Colorado Avalanche Dec. 21. Bozak then collected one assist in a 3-2 loss to the Arizona Coyotes Dec. 22 before closing the week with one goal in a 3-1 win over the New York Islanders Dec. 27. The 29-year-old Regina, Sask., native shares second on the Maple Leafs with 9-15—24 in 30 games this season, including 5-5—10 in his last eight outings.