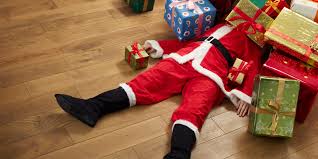 Are you ready? If not, here's hoping you find time to get that Christmas shopping done because if the last Saturday before Christmas wasn't hectic enough, I can't imagine what the next three days will be like for you.  I don't like going out at all on the last Saturday before Xmas because of the stupidity you can find out there in parking lots, etc. etc., but I had to drop something off Saturday morning and on the way home I drove by Costco at about 945. As one can imagine, the parking lot was jammed. I have no desire to know what type of chaos was going on inside.

It would seem as if the CFL train slowed down somewhat this week, but I am expecting things to heat up again after Xmas as teams use January to try and re-sign potential free agents. With the Riders getting rid of some guys who would have been free agents, it will be interesting to see just what the future holds for guys who are still FA's and just how much interest there is in those guys from Chris Jones and company. It was mentioned to me last week that there could be a 60-70 percent turnover on the roster from last year. At first thought, you think that is extreme and then you take a closer look at it and go there's a shot. As was noted, many of the cuts came on the defensive side of the ball with Andre Monroe getting traded on Friday for o-lineman Jarriel King, so you have to wonder if Jones and crew are happy with the way the offense played as two young quarterbacks got their feet wet. I don't know what the future holds for guys like Adcock, Bagg, Fulton and Ryan Smith, but I would think they can serve a role here. The question still remains and will so until free agency hits and that is just how many FA's from the Stampeders and Eskimos will be lured here. I am hearing "many". By the way, if you missed it, Sportscage Insider Arash Madani reported on the weekend the football club has hired Scott Annand is about to join the Riders front office. Madani says Annand is a friend of Jones and is somewhat of a big deal when it comes to football in Nova Scotia.

People keep referring to Chris Jones as a young Don Matthews. It is hard not to make that comparison and certainly the two men have a solid track record when it comes to what they have done in the CFL when it comes to playoff appearances and Grey Cups.  With all due respect to the Riders new head honcho, I don't think he will come close to having the wins Matthews had with that number being 231 by the time his career is over, but as he gets those wins which will come, here's hoping many of them are under that Riders banner.

The U-S College Football Bowl season started Saturday with the first of what is wayyyyyy too many. I love my U-S college football, but the amount of games we see is a little obscene with some teams getting rewarded for a season where they finished 500 and in the middle of the pack in their conference. The big bowls still see the best teams though so these money-grabbing secondary ones will continue to come and go. There is no doubt the real ones will start up between Christmas and New Year's with the two national semi-finals on New Year's Eve.

Russell Wilson is playing out of his mind right now. It was another outstanding outing from the Seattle quarterback to not only help me get to the finals of one fantasy league I am in, but more importantly get Seattle to the playoffs.  It is starting to look like they could be in the way of Carolina's perfect season as the two teams could meet in Round 2 of the playoffs. If it happens, I am more than ready to see that matchup.

If there is a team that will prevent New England from winning the Super Bowl, it is the Pittsburgh Steelers. Can anyone cover Antonio Brown? How many receptions is this guy going to end with this year. At his current pace, it will be between 130-150!

I have no interest in going to Star Wars whatsoever. Those who are "geeked out" can continue to do so, but I won't be bothering with it.

How much longer will the Anaheim Ducks continue to have Bruce Boudreau behind the bench and what point does one start to wonder what is wrong with Ryan Getzlaf who has just one goal this year.

I am becoming more and more convinced that automakers are making new vehicles without turn signals and sending those vehicles to Regina. It is something that eludes many it would seem.

Steve Harvey....YOU HAD ONE JOB. Click here to see what that job was and how he failed miserably! I'm guessing Steve won't be invited back for next yea.

The trading of Monroe is a sign of two things


You're already guaranteeing a playoff win for your Seahawks? Interesting!

I don't know if you were at the Pats games this weekend, but there is no buzz inside the building. The atmosphere can't be described, because you can't describe nothing. I thought we would get a lot better from the new group. I was wrong. I will spend my money elsewhere after Xmas.

Little bit of a stretch to compare Jones to Matthews as far as I am concerned.

Sewell will be a part of the Rider D Line as he will be one of many Eskimos calling Regina home after Feb 9.

Matthews won and Jones wins. WHat further comparison would you like?

Unless there is a plan to ship Dressler elsewhere, I don't see Smith being a Rider after Feb 9. Look for him to be a Bomber