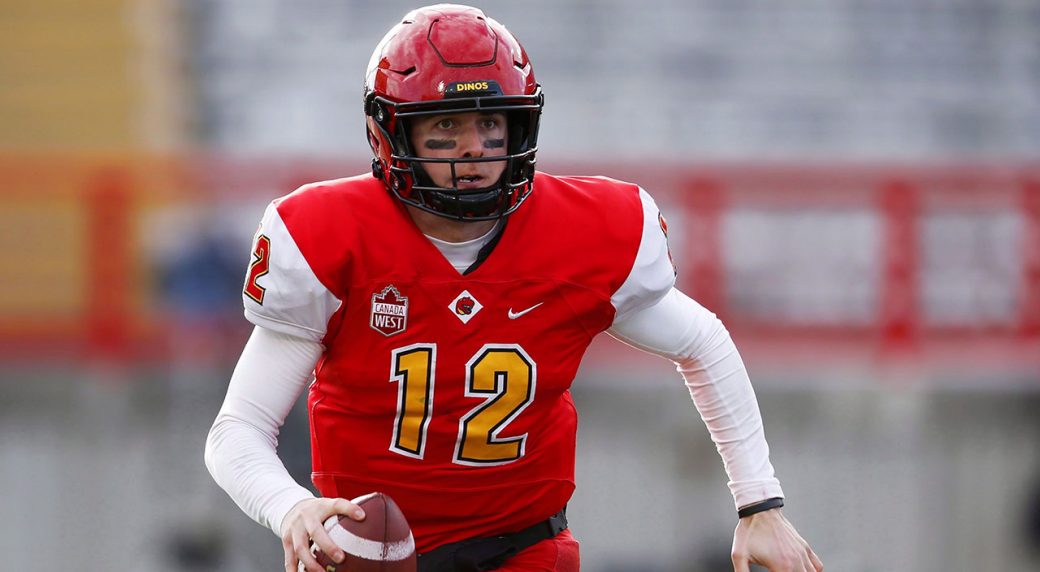 The Canadian Football League (CFL) announced the U SPORTS quarterbacks that will participate in the Canadian Quarterback Internship Program at CFL training camps in advance of the 2019 season.

The Canadian quarterback internship program started in 2010 and was made mandatory for all teams by the CFL in 2012. The program allows Canada’s best young pivots to participate in practice drills as well as team and positional meetings while continuing to develop and hone their skills at the quarterback position.

In just his third season, first as a starting quarterback for the Axemen, Hunter Guenard had an outstanding 2018 campaign. He posted 1,910 yards passing last season to lead the AUS in passing yards, passing yards per game (238.8 years/game), touchdown passes (12), a passing percentage of 65.6% and a passing efficiency of 152.3.

Adam Sinagra | Calgary Dinos | Edmonton Eskimos
In 2018 Sinagra averaged more than 400 passing yards per game and set a U SPORTS record with 3,233 yards, leading the Dinos to a perfect 8-0 regular season. His offence was the most potent in the nation, averaging more than 570 yards per outing, with Sinagra tossing for 23 touchdowns and, in one outing at Saskatchewan, turning in the best single-game performance in 35 years with his 569 passing yards. His efforts landed him the Hec Crighton Trophy as the nation’s outstanding football player, along with University of Calgary and Canada West male athlete of the year honours and a nomination for the Lieutenant Governor Athletic Award as the U SPORTS male athlete of the year.

Mason Nyhus | Saskatchewan Huskies | Calgary Stampeders
Entering 2019 as the starting quarterback for the first time in his university career, third-year business student Mason Nyhus will take over the reins of a University of Saskatchewan Huskies team that won the program’s 12th Hardy Cup title in 2018. In two seasons as a back-up to Kyle Siemens, Nyhus has completed 43 passes for 690 yards and five touchdowns while playing in all 16 regular season games since arriving on campus. Primarily used in short-yardage situations last season, Nyhus also rushed for a touchdown in 2018.

Des Catellier | Manitoba Bisons | Saskatchewan Roughriders
Quarterback Des Catellier will enter his second year as Manitoba’s starting pivot in 2019. He made huge strides in 2018, throwing for 2,012 yards and 16 touchdowns, the latter of which tied him for second in the Canada West conference. Over the Calgary native’s last two seasons, he’s thrown for 3,154 yards and 23 scores while also holding the best completion percentage in program history (minimum 500 yards passing per year), at 62.6%.

Sawyer Buettner | Ottawa Gee-Gees | Winnipeg Blue Bombers
Buettner, a native of Moose Jaw, Saskatchewan, joined the Ottawa Gee-Gees in 2018 after three years under centre with the Regina Thunder of the CJFL. The 6-2, 210 lb. former Team Canada quarterback led the nationally-ranked Gee-Gees to a 6-2 (2nd OUA) regular season record in his first year on campus.

At the helm of the Garnet and Grey offence, Buettner racked up 1,470 yards, 14 touchdowns, and a 145.4 passer efficiency rating in seven regular season games played.

A highlight of his freshman season was leading the Gee-Gees to a victory over Carleton in the Panda Game. Buettner threw for 243 yards and five touchdowns en route to a 38-27 win in front of a sold out crowd of over 24,000 at TD Place. The following week at Toronto, The Moose Jaw native, who also played for the PFC's Regina Thunder, had his best statistical game of the year, throwing for 405 yards and four touchdowns in the win.

Tre Ford | Waterloo Warriors | Hamilton Tiger-Cats
In only his second season as quarterback, Tre Ford (Niagara Falls, ON) electrified the crowd on a weekly basis by putting up eye-popping numbers, leading U SPORTS in touchdown passes (27), and OUA in passing yards (2,822) and completion percentage (74.1% – a new OUA single-season record). He also threw the fewest interceptions amongst all qualified passers (two) while rushing for 641 yards – good for sixth in the OUA.

Ford shattered several school records including most passing yards in a single game, doing so twice with games of 463 yards (win over Windsor) and 472 yards (win over Laurier that clinched Waterloo’s first playoff berth since 2003).

Ford followed up his OUA and U SPORTS rookie of the year awards in 2017 by winning the 2018 OUA MVP award. He was also awarded the 2019 Totzke Trophy as Waterloo Warriors’ male athlete of the year.

Clay Sequeira | Toronto Varsity Blues | Toronto Argonauts
Sequeira enters his fourth season with the University of Toronto Varsity Blues this fall. The native of Pierrefonds, QC dressed and started in four games for the Blues in 2018 before being sidelined due to injury. During those four games he went 72-for-127 for 875 yards and two touchdowns, including a career-high 367 yards versus Waterloo on September 1. Sequeira also ranked second on the team with 196 rushing yards and one touchdown last season. He represented U of T at the 2019 East West Bowl on May 11 in Ottawa.

Bailey Wasdal | St. FX X-Men | Ottawa REDBLACKS
A 6’1”, 193-pound business student from Calgary, AB. wrapped up his first season with the AUS champion St. FX X-Men. Third in conference passing, he went 121-196 in eight games played with a 61.7% passing percentage, averaging 186.8 yards per game and 7.6 yards per attempt. Wasdal threw nine touchdown passes and also rushed for six of his own TDs. A versatile QB out of the pocket, he was seventh overall in AUS rushing, averaging 43.4 yards per game with 52 carries for 346 total yards. The freshman pivot led the X-Men (6-2) to an AUS playoff semifinal win over Acadia, followed by a 33-9 Loney Bowl championship victory over SMU to earn them a berth in the national Uteck Bowl.

Maxime Bouffard | Bishop’s | Montreal Alouettes
Bouffard transferred to Bishop’s for the Winter 2019 semester after spending the fall at Concordia. The Sherbrooke native played his Cégep football in his hometown at the Cégep de Sherbrooke. He follows in his brother Alexandre’s footsteps as a Bishop’s Gaiter. The elder Bouffard was an annual Academic all-Canadian and a former quarterback turned receiver on the gridiron with the Gaiters.

Dimitrios Sinodinos | McGill | Montreal Alouettes
Quarterback Dimitrios Sinodinos just completed his sophomore year at McGill University. A 21-year-old electrical engineering major from Laval, Que., he became a starter in his second season and completed 94 of 224 pass attempts for 1,135 yards, six touchdowns and 10 interceptions. The 5-foot-10, 176-pound pivot was also credited with 17 rushing attempts for 30 yards and one TD.