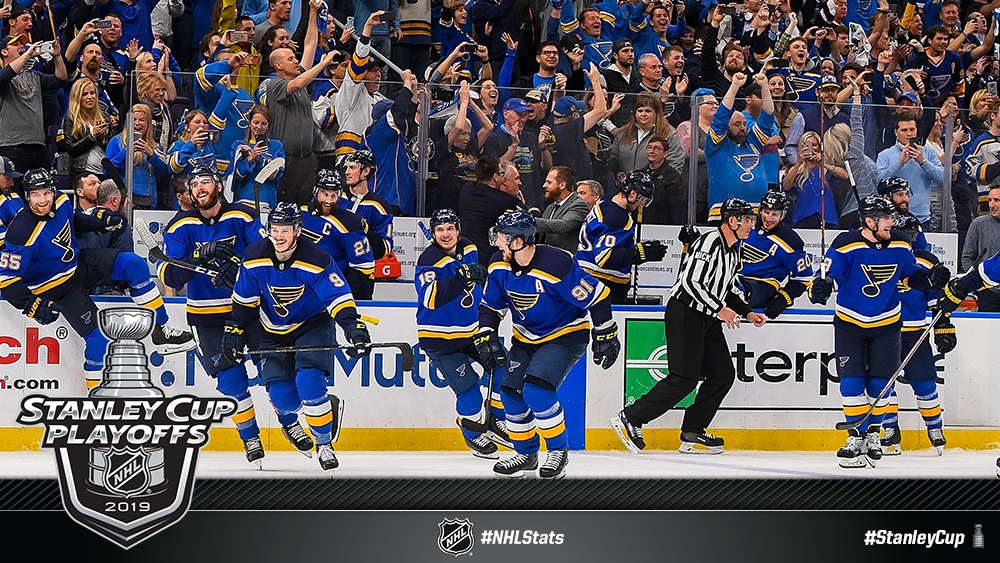 * The Blues netted their second five-goal outing in as many contests to advance to the Stanley Cup Final for the first time in 49 years.

* St. Louis is the only team in the expansion era (1967-68) to have been in last place in the overall League standings at any point after its 20th game of the season and rebound to make the Stanley Cup Final. They also did so in their inaugural season, reaching the Final after holding the No. 12 seed through games played Dec. 12, 1967.

* The Bruins and Blues are set to face off in their third Stanley Cup Playoffs series and will meet in the Final for the second time. In 1970, Bobby Orr scored his famous Cup-winning goal to help Boston defeat St. Louis in four games. 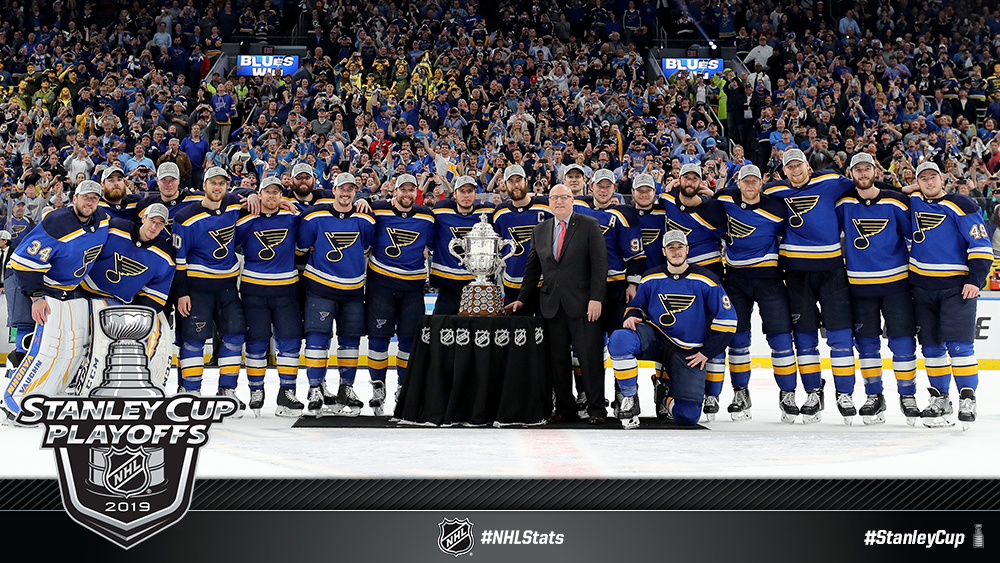 Veterans David Perron (1-1—2) and Ryan O’Reilly (0-3—3) led the way offensively as the Blues, who are in search of the franchise’s first-ever Stanley Cup championship, tallied five goals for the second straight game to advance to the Stanley Cup Final for the first time in 49 years and fourth time in franchise history.

Vladimir Tarasenko extended his point streak to six contests and led the Blues offensively in the Western Conference Final (3-5—8 in 6 GP) - finding the score sheet in each game. He also became just the third player in Blues franchise history to score 30 career playoff goals, joining Hall of Famers Brett Hull (67) and Bernie Federko (35).

* Alex Pietrangelo assisted on Brayden Schenn’s second-period goal. Pietrangelo has collected 13 points in the 2019 Stanley Cup Playoffs (2-11—13 in 19 GP), trailing only the Sharks tandem of Brent Burns (5-11—16 in 20 GP) and Erik Karlsson (2-14—16 in 19 GP) for the most among defensemen. In the process, the Blues captain set a new franchise record for points in a single postseason by a defenseman.

Perron opened the scoring 92 seconds into Game 6, the second time the Blues have done so in the Conference Finals after Ivan Barbashev found the back of the net 35 seconds into Game 4. The Blues improved to 5-0 when scoring in the opening two minutes of a game in the 2019 Stanley Cup Playoffs (also Game 6 of R1, Game 3 of R2, Game 6 of R2 and Game 4 of CF). 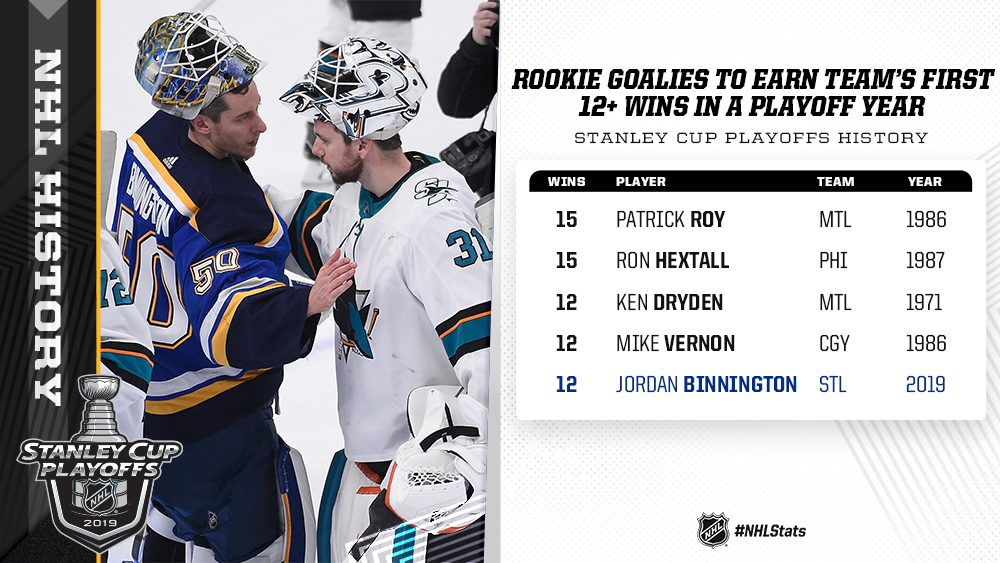 * With his team entering the final frame with a two-goal lead, Jordan Binnington turned aside all 10 shots he faced in the third period to improve to 12-7 in the Stanley Cup Playoffs (2.36 GAA, .914 SV%, 1 SO). The 2018-19 Calder Memorial Trophy finalist became the fifth rookie netminder in NHL history, and first in 32 years, to be responsible for each of his team's first 12 wins in a playoff year.

* The Blues clinched a series on home ice at Enterprise Center for the third time in the 2019 Stanley Cup Playoffs, also doing so against the Jets and Stars in the First and Second Round, respectively. Only two teams in NHL history have clinched four series at home in a playoff year: 1988 Oilers and 2007 Ducks.

The Blues, who ranked last in the overall standings as recently as Jan. 2 when the club was 45% into their 2018-19 campaign (15-18-4, 34 points in 37 GP), look to continue a comeback season unlike any other in NHL history as they pursue the franchise’s first Stanley Cup.

* An NHL team has never gone from last place at any point after their 20th game in the regular season to Stanley Cup champion in the same campaign. In fact, only four other teams in the expansion era have reached the Final after ranking among the bottom three in the standings at any point after their 20th game, with the first such instance involving both the Blues – in the franchise’s first NHL season – and the Canadiens in 1968. The others: 1991 North Stars and 2010 Flyers.

* The 1968 Stanley Cup Playoffs were the first of the expansion era – when the NHL grew from six teams to 12 – and the Blues became the first of the new franchises to reach the Stanley Cup Final after advancing out of the all-expansion West Division with a pair of seven-game victories. In the Final, the Blues would meet the Canadiens – winners of two of the previous three Stanley Cups – and fall in four games despite the heroics of Hall of Fame goaltender Glenn Hall, who was awarded the Conn Smythe Trophy in a losing cause. The 1968 Canadiens are the only team in the expansion era to win the Stanley Cup after ranking among the bottom three in the standings at any point after their 20th regular-season game.

The Bruins will host the Blues in Game 1 of the Stanley Cup Final on Monday, May 27 at TD Garden in Boston.

* This will mark the third all-time playoff meeting between the Blues and Bruins and second in the Stanley Cup Final - Boston’s Bobby Orr scored his legendary Stanley Cup-clinching goal against St. Louis in Game 4 of the 1970 Stanley Cup Final. The teams also met in the 1972 Semifinals, also a four-game sweep by Boston en route to a Cup win.


* Boston (1-0-1) won the first meeting this season between the clubs at TD Garden on Jan. 17, with Tuukka Rask making 28 saves to match the Bruins franchise record for career wins. St. Louis (1-1-0) emerged in the second contest, with Jordan Binnington posting a 31-save performance on Feb. 23 at Enterprise Center - the 14th win of his NHL career - to defeat Rask (28 saves) and the Bruins. Sammy Blais scored the shootout-winner in the latter contest as St. Louis improved to 13-2-0 since its first meeting with Boston, while also ending the Bruins’ season-high winning streak at seven games.

* Bruins forward David Backes will be making a run at his first Stanley Cup against the team that selected him 62nd overall in the 2003 NHL Draft. Backes tallied 206-254—460 in 727 regular-season games over 10 NHL seasons with St. Louis, serving as captain from 2011 until 2016 when he helped them reach the Western Conference Final.