* Sharks captain Joe Pavelski collected 1-1—2 in his return to the lineup to help San Jose win Game 7 and advance to the Western Conference Final for the fifth time in franchise history.

* The Bruins will host the Hurricanes at TD Garden in Game 1 of the Eastern Conference Final, the fifth all-time head-to-head postseason meeting between the franchises and first in a decade. 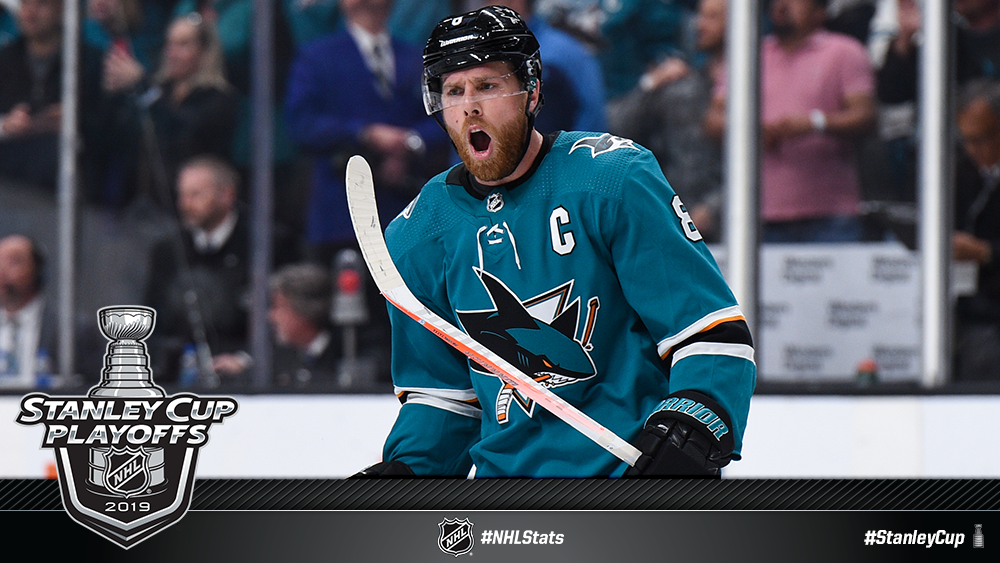 In his first appearance since Game 7 of the First Round, San Jose captain Joe Pavelski opened the scoring at 5:57 of the first period and added an assist as the Sharks defeated the Avalanche in the seventh and deciding game of the series to advance to the Western Conference Final for the fifth time in franchise history and second time in the past four postseasons (also 2004, 2010, 2011 and 2016).

* The Sharks improved to 8-4 in their 12 all-time Game 7s overall, including a 5-1 clip on home ice. San Jose became the fourth franchise in NHL history to earn wins in at least five of its first six Game 7s which took place at home and the first non-Original Six club to do so. The others: New York Rangers (6-0), Detroit Red Wings (5-1) and Toronto Maple Leafs (5-1).

* Pavelski has collected five points in seven career Game 7s (3-2—5) and improved to 5-2 in those contests. The native of Plover, Wis. scored his 47th career goal in the Stanley Cup Playoffs (47-50—97 in 129 GP) to pass Kevin Stevens (46) and tie Chris Drury for sixth place on the NHL’s all-time list among players of U.S. nationality.

* Tomas Hertl (1-1—2) scored his ninth goal of the 2019 Stanley Cup Playoffs (9-5—14 in 14 GP) and has collected five points in four career Game 7s (2-3—5), including registering 1-1—2 in the Sharks’ winner-take-all contest during the First Round. Hertl recorded his League-leading sixth multi-point game of the 2019 postseason.

* Brent Burns (0-2—2) concluded the Second Round with 4-6—10 (7 GP) and became the first defenseman in franchise history to record 10 or more points in a postseason series. The last blueliner on any team to record more than 10 points in a Stanley Cup Playoffs series was Rangers defenseman Brian Leetch in the 1994 Stanley Cup Final (5-6—11 in 7 GP).

* Joonas Donskoi scored the series clincher to snap a 39-game goal drought dating to Jan. 10. Donskoi (7:34) became the fourth player since 1997-98 to score the series-clinching goal in a Game 7 despite logging under eight minutes of ice time, a feat teammate Barclay Goodrow (7:26) also accomplished in the 2019 First Round. The two others: Roman Lyashenko (7:16) in the 2000 Conference Finals (w/ DAL) and Arron Asham (7:59) in the 2013 Conference Quarterfinals (w/ NYR). 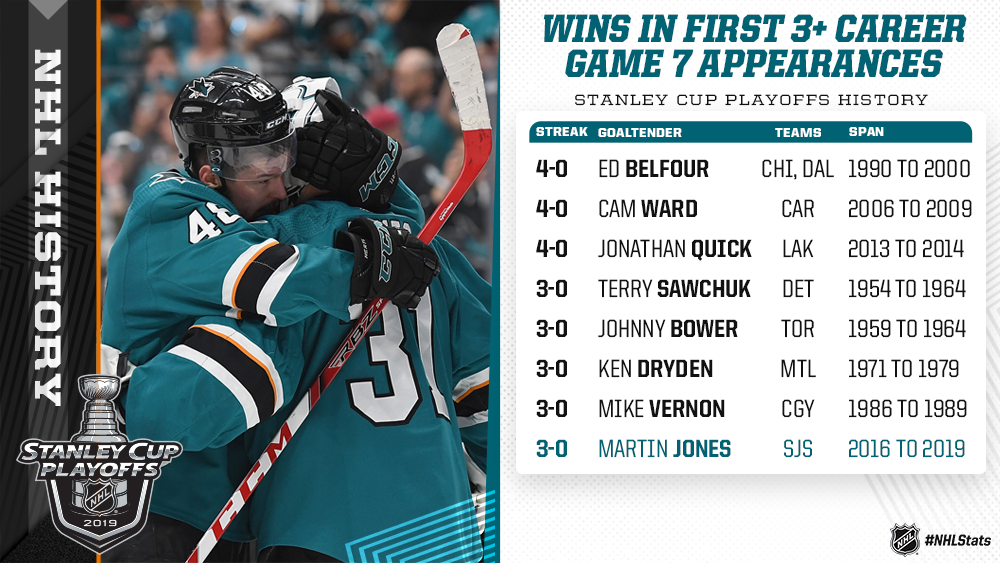 * Martin Jones (27 saves) improved to 3-0 in three career Game 7s. He became the eighth goaltender in NHL history to earn wins in each of his first three or more career Game 7 appearances.

* The Sharks will face the Blues in the Western Conference Final with Game 1 set for Saturday at SAP Center. San Jose is 3-2 in five all-time head-to-head postseason series with St. Louis, including a six-game triumph in the most-recent meeting when the Sharks eliminated the Blues in the 2016 Conference Finals to reach the Stanley Cup Final for the first time in franchise history. 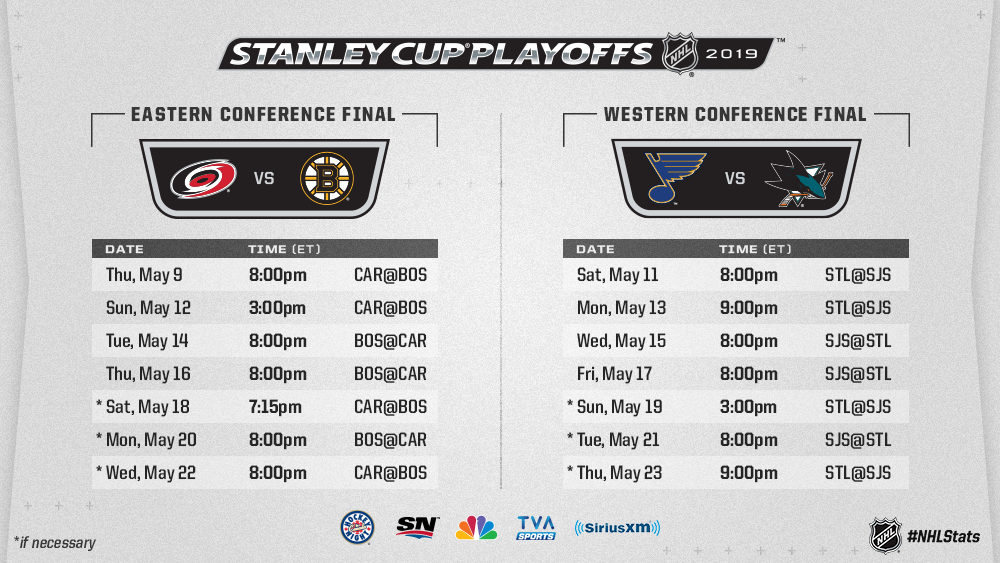 The Bruins will host the Hurricanes at TD Garden in Game 1 of the Eastern Conference Final. This marks the fifth head-to-head postseason meeting between the franchises with Boston holding a 3-1 edge in the four previous series.

* The Bruins are making their third trip to the Eastern Conference Final in the last eight years (also 2011 and 2013) – they advanced to the Stanley Cup Final in each of the previous two appearances including a championship triumph in 2011.

* The Hurricanes, riding the wave of the franchise’s first-ever sweep in a best-of-seven series, have reached the Conference Finals in each of their last four postseason appearances (also 2002, 2006 and 2009). Only two other franchises have advanced to the Conference Finals in four or more consecutive playoff appearances (regardless of when those occurred) since 1982 when the round was introduced: Detroit (1995-98) and Colorado (1999-2002).

* The two clubs last met in the postseason in the 2009 Conference Semifinals, when Scott Walker scored the overtime winner in Game 7 to power the Hurricanes past the Bruins, marking Carolina’s last postseason series win prior to the 2019 Stanley Cup Playoffs. Walker became the first player in Hurricanes/Whalers franchise history to score an overtime goal in a Game 7 – a feat Brock McGinn also accomplished in the 2019 First Round at Washington.