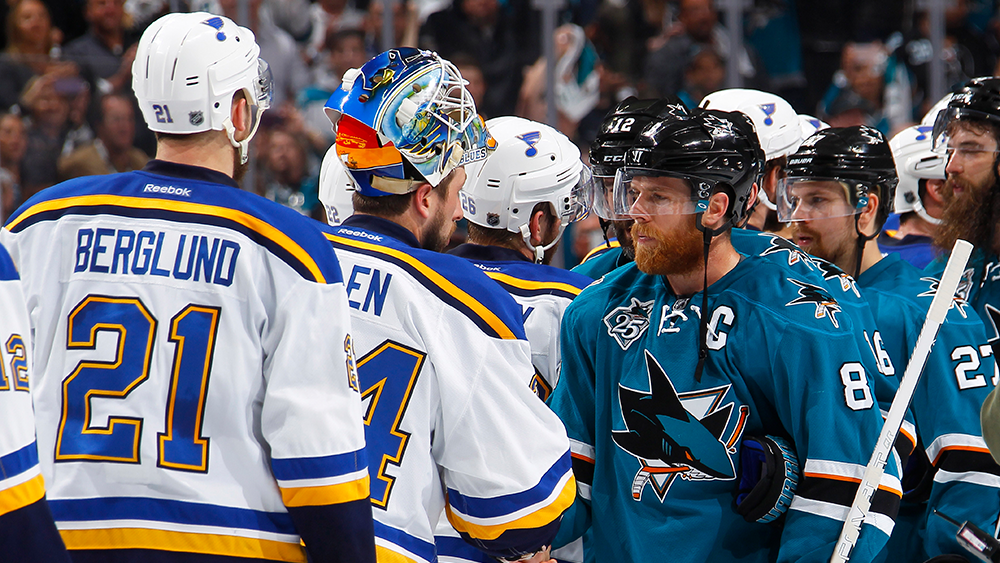 After both clubs survived a seven-game series in the Second Round, the Sharks and Blues will face off in Game 1 of the Western Conference Final at SAP Center in San Jose. Both teams are in pursuit of their first Stanley Cup.

* San Jose holds a 3-2 edge in five all-time head-to-head postseason series, including a six-game triumph in the 2016 Conference Finals when they reached the Stanley Cup Final for the first time in franchise history.

* In the 2016 Western Conference Final, the Sharks grabbed home-ice advantage by splitting the first two games in St. Louis and went on to win all three games at SAP Center to clinch the series in six games. Sharks center Joe Pavelski led all scorers in the series with 4-5—9, finding the score sheet in all six games.

* With his performance in Game 6 against the Blues, Couture became just the third player in NHL history to record at least three points in three series-clinching wins within a postseason, joining Wayne Gretzky (1985, 1988 and 1993) and Jari Kurri (1985). 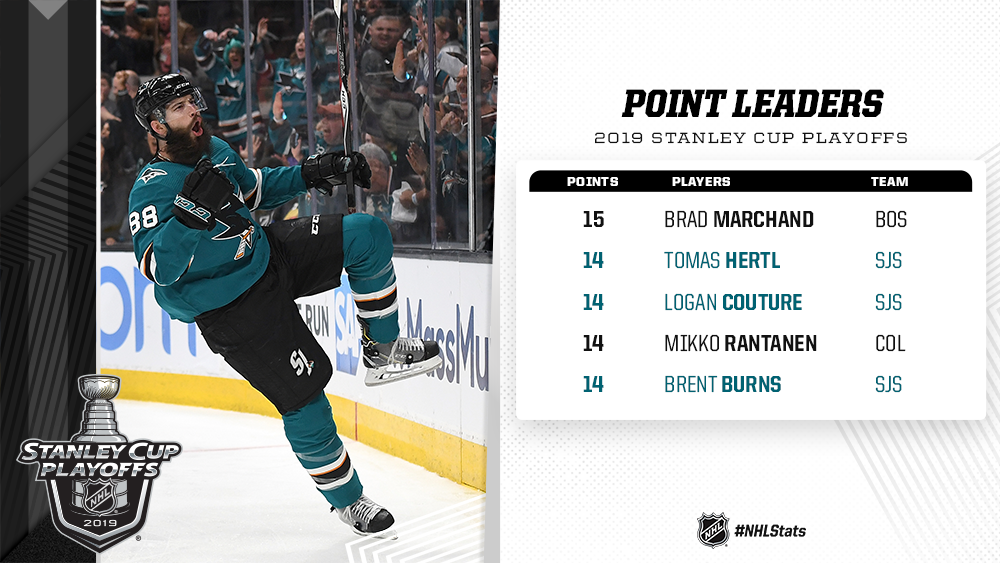 * The Western Conference Final features each of the top three goal-scorers of the 2019 postseason, with Hertl and Couture sharing the League lead, one ahead of Blues forward Jaden Schwartz (8-3—11 in 13 GP). After scoring 11 times in 69 games during the regular season, Schwartz now needs five to equal the single-year franchise playoff record of 13 goals, achieved by Brett Hull in 1990 (12 GP).

A trio of players with 1,000 or more regular-season games to their credit will hit the ice in the Western Conference Final with their sights set on hoisting the Stanley Cup for the first time: Sharks teammates Joe Thornton (1,566 GP) and Brent Burns (1,043 GP) as well as Blues defenseman Jay Bouwmeester (1,184 GP).

* Overall, seven players with at least 900 regular-season games played are still in the running to win the Stanley Cup this year. The others: Marc-Edouard Vlasic (965 GP), Joe Pavelski (963 GP), Alexander Steen (963 GP) and David Backes (928 GP).

* Thornton (413-1,065—1,478 in 1,566 GP), who leads all active players in career assists and points, is in search of his first Stanley Cup while skating in his 21st NHL season. Only two players in NHL history won their first Stanley Cup after appearing in at least 1,500 regular season games: Ray Bourque (1,612 GP) and Dave Andreychuk (1,597 GP). Bourque is the only player in League history to win his first championship after reaching the 1,400-point milestone.

Blues rookie goaltender Jordan Binnington has played a crucial role in St. Louis’ playoff run since bursting onto the scene on Jan. 7 – with his club sitting last in the Western Conference, nine points out of the postseason picture.

* Binnington’s 24-5-1 regular-season record helped the Blues become the seventh team since 1967-68 to reach the playoffs after ranking last overall at any point after New Year’s Day (min. 20 GP). He then helped them become the first of those seven teams to win a series.

* Binnington, the ninth rookie goaltender in Blues history to start a playoff game, already owns the franchise rookie records for playoff games played/started (13) and wins (8). Only 12 rookie netminders in NHL history have recorded at least nine wins in a postseason, including only one in the past 12 years – Matt Murray posted a 15-6 record with the 2016 Penguins, tying an NHL rookie record for one playoff year.

* St. Louis is looking to advance to the Stanley Cup Final for the first time since qualifying in each of its first three years of existence (1968-70). The Blues are one of two teams without a Cup despite reaching the Final on three occasions (Canucks: 0-3).

* While St. Louis has the most players with experience in the Conference Finals or Stanley Cup Final, they have the fewest combined games played in those rounds. Overall, the 40 players have a combined 471 games played past the second round (San Jose: 171, Boston: 148, Carolina: 80, St. Louis: 72).