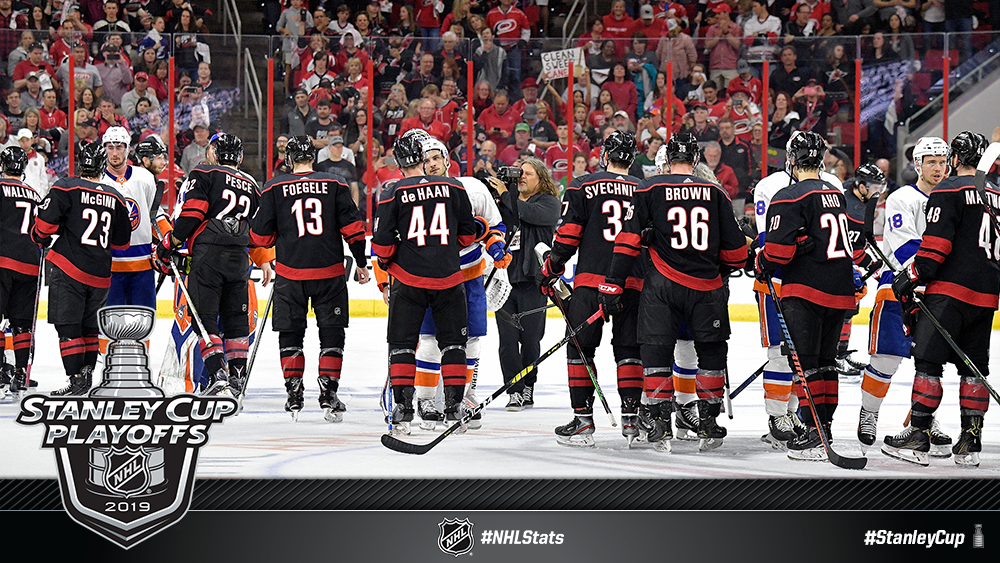 
* The Hurricanes completed their first-ever sweep in a best-of-seven Stanley Cup Playoffs series to surge into the Eastern Conference Final.

* Ben Bishop helped secure a Game 5 win for the Stars, who will return to Dallas owning a 3-2 series lead over St. Louis.

* The Bruins host the Blue Jackets at TD Garden and the Sharks welcome the Avalanche to SAP Center with each series tied 2-2.

Playing in front of the largest crowd in franchise history, the Hurricanes received goals from five different skaters – including the series-clinching tally by Greg McKegg 66 seconds after a strike by Teuvo Teravainen (1-1—2) – and Curtis McElhinney made 26 saves as Carolina swept its way into the Eastern Conference Final. The Hurricanes completed their first-ever sweep in a best-of-seven series to reach the Conference Finals for the fourth time in as many postseason appearances (also 2002, 2006 and 2009).

* With “Loudest House in the NHL” towels in hand, 19,495 “Caniacs” filled PNC Arena to set a Hurricanes/Whalers attendance record. It was the second time in as many days that an NHL franchise broke an attendance record, with the Blue Jackets doing so on Thursday.

* In addition to Carolina, only two other franchises have advanced to the Conference Finals in four or more consecutive playoff appearances (regardless of when those occurred) since 1982 when the round was introduced. Detroit and Colorado achieved the feat in consecutive years, from 1995-1998 and 1999-2002, respectively. 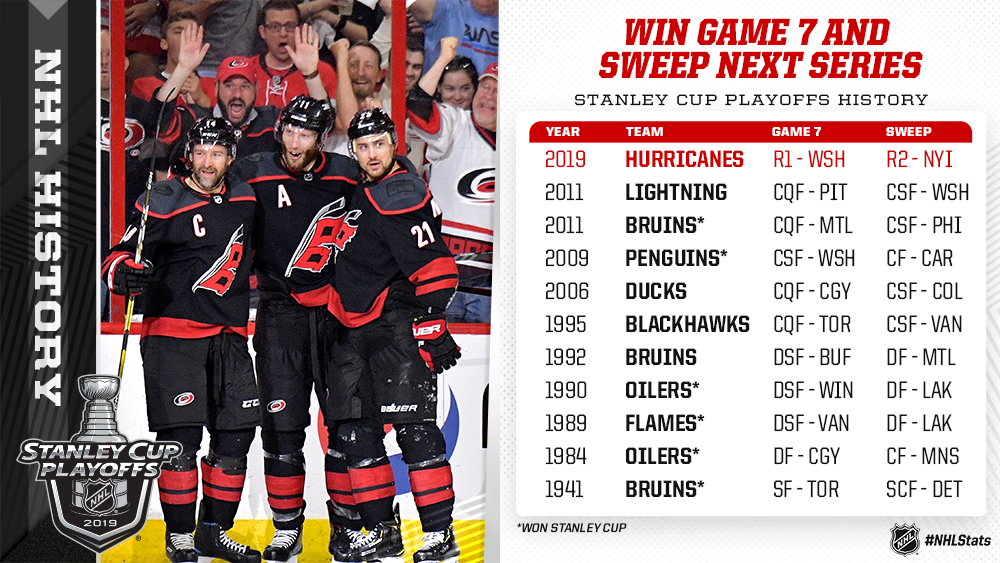 * Carolina became the first team in 26 years - and ninth in NHL history - to sweep an opponent who had won its previous series via a four-game sweep. Montreal was the last team to do so, going 4-0 against Buffalo in the 1993 Division Finals after the Sabres swept the Bruins in the previous round.

* Only 0.012% of submissions to the 2019 Stanley Cup Playoffs Bracket Challenge presented by Jägermeister accurately selected all eight First Round winners and Carolina to advance past the Second Round (165 of 1.42 million). Only 4.1% of brackets submitted before the playoffs began had the Hurricanes reaching at least the Conference Finals.

DID YOU KNOW? THE QUEST CONTINUES

* Since Carolina won the Stanley Cup in 2006, there have been six teams who reached the Conference Finals despite concluding the regular season outside the top six in their conference – including the Hurricanes in 2019 (also Edmonton in 2006, Philadelphia in 2010, Montreal in 2010, Los Angeles in 2012 and Nashville in 2017). Three other Wild Card teams are within two victories of joining Carolina in the next round: Colorado, Columbus and Dallas.

* After becoming the 15th team in the expansion era to eliminate the defending Stanley Cup champion in the opening round, Carolina now is the eighth of that group to win its next round. Four of those clubs reached the Final and one hoisted the Cup (1971 Canadiens).

* Carolina is looking to continue a recent trend among teams that have eliminated the defending champions. Since 2013, the team that knocked out the previous Stanley Cup winner has gone on to win the championship three of four times (CHI in 2013, LAK in 2014 and WSH in 2018).

^Los Angeles did not qualify for 2015 playoffs after winning in 2014; Pittsburgh repeated in 2017

After finishing 14 points outside the playoff picture in 2017-18, the Hurricanes entered their first full season under new majority owner Tom Dundon with an organizational overhaul from top to bottom. Among their many changes in the offseason, Carolina hired a new general manager (Don Waddell), new head coach (Rod Brind’Amour), named a new captain (Justin Williams), traded two top-six forwards and their highest-scoring defenseman, lost a starting goaltender to free agency and acquired 14 players – including seven who have played this postseason. The Hurricanes also acquired Nino Niederreiter on Jan. 17.

* No stranger to coming up clutch in the playoffs, Foegele was named MVP of the 2017 OHL Playoffs after averaging over a point per game with the Erie Otters (13-13—26 in 22 GP). He became the third Otters player to capture the honor since its introduction in 1998-99, joining former Bruins forward Brad Boyes (2001-02) and Oilers captain Connor McDavid (2014-15) – with whom he played minor hockey.

* Curtis McElhinney improved to 3-0 in the 2019 Stanley Cup Playoffs (1.56 GAA, .947 SV%) since entering Game 2 in relief of Petr Mrazek. Carolina became the third team in the past 29 years to sweep a best-of-seven series with multiple goaltenders recording a win.

Ben Bishop made 38 saves, including 14 in the third period, as Dallas won Game 5 to take a 3-2 lead against St. Louis. The Stars moved within one win of reaching the Conference Finals for the seventh time in franchise history.

* Bishop improved to 15-7 in 23 career postseason appearances on the road with a 1.81 goals-against average, .940 save percentage and two shutouts. His road goals-against average is the seventh-lowest in playoff history (min. 10 road GP) and third-lowest among goaltenders to play in the League’s modern era (since 1943-44), higher than only Patrick Lalime (1.77) and Mike Smith (1.78).

Two deadlocked series shift cities on Saturday as the Bruins and Blue Jackets clash at TD Garden before the Sharks and Avalanche close the doubleheader at SAP Center.