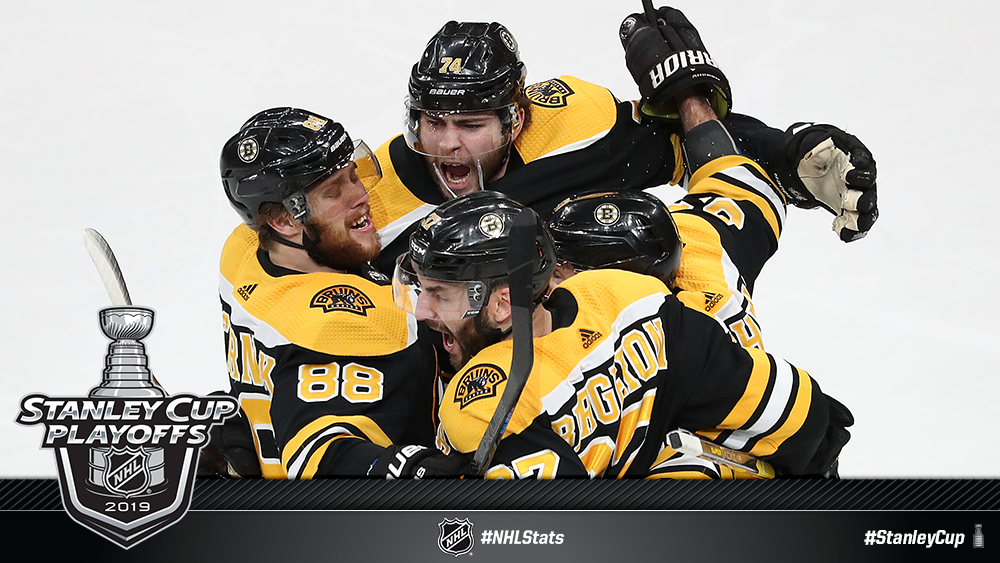 * Marcus Johansson and Patrice Bergeron scored power-play goals 28 seconds apart as the Bruins rallied from a 2-1 deficit with four straight third-period goals to claim Game 1 of the Eastern Conference Final against the Hurricanes.

* Bergeron netted his League-leading fifth power-play goal of the 2019 Stanley Cup Playoffs. It marks the most by a Bruins player since Cam Neely established a franchise high and matched Mike Bossy’s NHL record with nine in 1991.


BRUINS STORM BACK IN THIRD TO TAKE GAME 1 FROM HURRICANES

Entering the final frame facing a 2-1 deficit, Marcus Johansson and Patrice Bergeron each scored a power-play goal 28 seconds apart to help the Bruins rally and take Game 1 of the Eastern Conference Final from the Hurricanes.

* Boston, which captured Game 1 of a Conference Finals series for the fifth time, halted Carolina's six-game win streak - the Bruins went on to win three of those previous four series (1988, 1990 and 2013). Since the conference format was adopted during the 1981-82 campaign, teams that win Game 1 of the Conference Finals own an all-time series record of 46-26 (63.9%).

* Bergeron, who’s fifth power-play goal of the playoffs stood as the game winner, boosted his postseason totals to 37-58—95 in 126 GP and sits five points shy of becoming the fifth player in Bruins franchise history to collect at least 100 playoff points. His five power-play markers in 2019 are the most by a Bruins player since Cam Neely established a franchise record and matched Mike Bossy’s NHL record with nine power-play goals during the 1991 Stanley Cup Playoffs.

* Boston sealed their Game 1 victory with another spurt of quick goals late in the third period, when Charlie Coyle and Chris Wagner scored 11 seconds apart, tied for the third-fastest pair of playoff tallies in Bruins franchise history. The only faster instances: 0:07 (Game 4 of 1989 DF) and 0:09 (Game 1 of 1975 PRLM).

* The Bruins recorded their third comeback win of the 2019 Stanley Cup Playoffs, tied for the second-most among all clubs this postseason. Only the Hurricanes and Stars have posted more such victories (each with 4).

The Western Conference Final will open with Game 1 on Saturday when the Sharks host the Blues at SAP Center. San Jose is 3-2 in five all-time head-to-head postseason series with St. Louis, including a six-game triumph in the most-recent meeting between the clubs in the 2016 Conference Finals.

A team in search of its first-ever Stanley Cup is guaranteed to reach the Final after the Western Conference clash, as the Sharks (27th season) and Blues (51st season) are both searching for the first championship in franchise history.