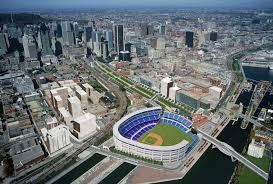 Major League Baseball commissioner Rob Manfred said Monday that Montreal needs a new stadium to have any chance of bringing the sport back to the city.

"The key thing in Montreal would be to have a plan for an adequate facility that could support baseball over the long haul," he told The Canadian Press just a few days before Montreal hosts two exhibition games between the Toronto Blue Jays and Cincinnati Reds at Olympic Stadium.

Manfred said the league would need a strong commitment from Montreal for a new stadium before the league could seriously consider relocating a team or expanding there.

"I don't expect people to go into the ground and build a facility without some sort of commitment that they are going to get a team," he said. "But I do think that you need a plan and a commitment to how that plan is going to be executed."

The Expos joined the National League for the 1969 season and remained in the big leagues through 2004 before moving to Washington and becoming the Nationals.

While the Expos failed to draw 1 million spectators to Olympic Stadium in any of their final seven seasons, a total of 96,350 fans attended a pair of exhibition games there in March 2014 between the New York Mets and Blue Jays.

"The exhibition games last year and how well they were attended and at least the early reports on the games this year demonstrate a real interest in Major League Baseball and the Montreal market," Manfred said. "We find that to be very interesting and exciting."

According to Manfred, exhibition games in non-MLB cities are an important litmus test for the potential viability of a market.

"The games like those exhibition games in new markets are important as an initial test of the level of interest that the market has in the game," he said. "When you have the kind of success you've had in Montreal, you kind of pass the first initial test of whether it's a market that could support baseball."

Manfred, who replaced Bud Selig as commissioner in January, said MLB is not looking in the short term to increase the league from 30 to 32 teams.

More than 80,000 tickets have already been sold for the upcoming exhibition games between Toronto and Cincinnati. Olympic Stadium, built for the 1976 Games and home to the Expos starting in 1977, holds 45,757 fans when configured for baseball.

The new commissioner didn't give much away as to the league's plans for the future, but he did say that if MLB expands beyond the continental United States, the likely new markets will be in Mexico or Canada.

"Mexico and Canada present the most fertile ground just in terms of the level of baseball interest and the proximity to our existing franchises," he said.

Manfred said the league prefers to make baseball work in existing markets, despite the troubles some MLB cities have been facing, such as Tampa Bay and Oakland.

"But we have always been realistic," he said. "At the end of the day, relocation to another market could be the only solution."

What a catch 22! Baseball seems to say we aren't coming until you have a new stadium, but no one will put money into a new stadium until a team is awarded.

Having a team back in Montreal would be great, but I don't see it happening.

The sport is booming in Canada.

Having the Expos back would take it right off the charts.

One problem with baseball, and sports in general in Quebec:

If you don’t win they won’t go to the games. It’s what killed the Expos in the first place!

An expansion team will take several years to be a contender (maybe for only 1 year) and Quebec sport fans aren’t that patient.