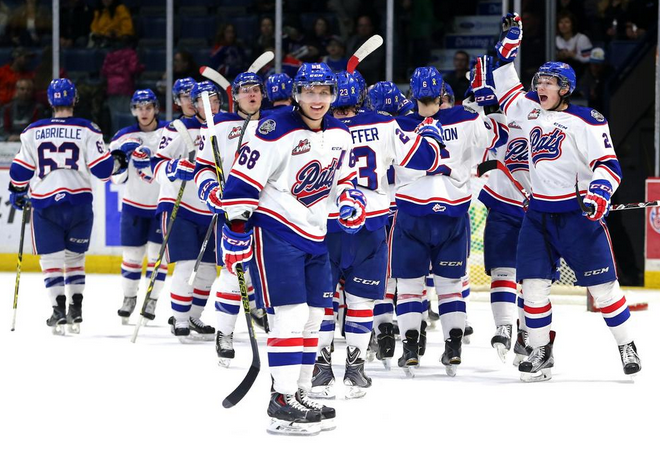 The Regina Pats are up 2-0 in their best of seven, but they haven't done anything yet. The old saying is a team isn't in trouble until they lose at home so its up to the Swift Current Broncos to try and hold serve starting Tuesday in Game 3.  However, one has to wonder if the home-cooking will change the complexion of this best of 7.

As mentioned in previous postings, the Broncos came out and maybe deserved a better fate in Game 1 as Daniel Wapple's efforts, especially in the first period was the impetus for a Regina win, but Game 2 was a game which flattered Swift Current as far I was concerned. The Pats were by far and away the better team as they controlled the play and dictated the flow. If that happens in the next two games, we may have seen the last of the Broncos......but I doubt that.

There are several Pats who stood out for me in the first two games---Wapple, Pavel Padakin and the 15 year old Jake Leschyshyn who is showing the step up to junior from midget is not a big one for him as he has fit right in. This kid will be something to watch starting next year when he is here on a full-time basis.  While several Pats have stood out, there has not been one Swift Current player that has turned my head. Colby Cave, Jake Debrusk and Dillon Heatherington have not brought their "A" game in this blogger's opinion and at this time of  year, your best players have to be playing like it.

When did Regina hockey fans suddenly become loud and boisterous. The Brandt Centre has been known to be home to a silent fanbase, but that was not the case on Saturday night as the building was as loud as I have heard it in several years for a hockey game.  Perhaps the playoff run starved hockey fans in this city have seen what Paddock's proteges are doing and they like what they are seeing. It seems to me as if they may have bought in. That crowd will be needed for Game 5 (if there is one) and beyond.  Its good to see!

Congratulations to the Regina Pat Canadians on their Saskatchewan Midget Triple A title. The West regional follows before a trip to the Telus Cup in Riviere de Loup, Quebec. I don't even know where that is, but the Pat C's want to get there.

Former Riders DL Ricky Foley had the tweet of the weekend.  Foley, like many others, doesn't like some of the new CFL rules and said Love #CFL rule changes...Esp the 1 where the
Offence goes on the powerplay & steals 2nd base off a corner kick 2hit the game winning 3pter.

The Leafs haven't done a lot right this year, but they got it right with what they did for Garrett Gamble. If you don't know about it, just Google "Garrett Gamble" and I think you'll agree. Speaking of the Leafs, the talking heads can yap about it all they want, but I just don't see Mike Babcock being their new head coach. Why would he want that job?

Todd Nelson has done a good job with the Oilers since taking over for Dallas Eakins behind the bench, I would think the Oilers brass will likely keep him going into next season, but if Todd McLellan comes available, one would have to think Edmonton would be interested. Is the feeling mutual?

If the Oilers end up with the #3 or #4 draft pick meaning they don't get a shot at either Connor McDavid or Eichel, I say trade down if you can and get a top 2 or 3 defenceman.
-----

With all the talk about "tanking" to get Connor MacDavid, it is time for the NHL to change its draft lottery. While many ideas are floating around as to how to do this, I say you get a bingo machine with 14 balls and you fire it up. If that means a team that barely missed the playoffs gets the number one pick so be it. If it means the worst team in the league ends up picking 14th so be it. A draft lottery is supposed to be a lottery. When I go to get a lottery ticket, there is no indication there is a 12 percent chance the number 5 wil be picked and there is a 1 percent chance number 30 will be picked. All of the numbers have a 1 in whatever chance of being selected. Why can't we do that in the NHL and the NBA for that matter. This would solve a lot of problems wouldn't it. It would certainly prevent a team from "tanking".
-----

If the Stanley Cup playoffs started today, the Bruins would play the Canadiens. Do we really need to see those two teams go at it again?

Thank you TSN for giving us a solid dose of US College Hockey this weekend. I love the NCAA brand of hockey. One of the Frozen Four games will be between North Dakota (they're still the Fighting Sioux to me) and Boston University featuring Jack Eichel--the likely 2 pick in the NHL draft. That game will be a dandy!

-----
Speaking of dandys, the Kentucky-Notre Dame March Madness regional final was everything you wanted in a sporting event. Notre Dame played the game of their lives and it still wasn't good enough. That being said, I think Wisconsin will give John Calipari's group everything they can handle if not more next weekend.

Wrestlemania was actually pretty good. None of the results really surprised me including the Seth Rollins run-in at the end to take the title. It had to happen sooner or later. He never pinned Brock Lesnar and sets up a feud with him. The highlight was definitely the appearance of the Rock and UFC female uber-star Ronda Rousey. Their bit with Triple H and Stephanie McMahon was outstanding. I have to wonder though what UFC boss Dana White thought about Ronda's appearance. I wonder if that could be the start of a mixed tag match for Wrestlemania 32 in Dallas.
-----

NOTE TO SELF: Don't ever challenge Rams defensive back Tevaughn Campbell to a race. The man can run!

One week from tonight, the baseball season will be underway. Can't wait!

When did Pats fans get loud?

That was great to see. Keep it up!

I've been watching wrestling for too long because no match surprised me yesterday.

Putting the strap around Bryan and Cena(popular guys) and having Rollins win couldn't have surprised anyone who watches on a regular basis.

The Rousey spot was great though! Highlight of the day!

SC's best player was Debrusk. He showed why he's a first round prospect in Game 1.

I agree - who wants to see the Canadiens versus the Bruins. To ensure this doesn't happen, the Canadiens should lose the rest of their regular season games, and rest all of their star players now for the playoffs.

Foley isn't that far off.

The CFL will be a joke if some of these rules come through.

A bit surprised that you and Rod have NO blog comment at all today on the CFL combine this past weekend and the performance of the players from the Rams. The performance by Campbell deserved some mention least.

JOHN CENA WON??? Who could have seen that coming!

How old is Kevin Nash now? That was embarrassing!

WHY on earth would you not want to see a Canadiens - Bruins playoff matchup? You know from the start, its going 7 games. AND it may be the best rivalry in all of sports. Not to mention, the Bruins would kill(especially LUCIC! lol) to have redemption at the Habs from last year! They're gonna need all the luck they can muster because nobody is beating Price and MTIL!

ps. suck it Bruins fan about in the comments. I dont think you want to wish ill-will on any player. Chara already tired to kill Patchs and with Lucic's threats, they could end up in jail! Hahahaha.

To the guy asking about the Rams performance at the blog. I guess the race against Tevaughn Campbell went above your head.

Where do you see him going Mitch? Personally, I think he could be another NFL'er because in the CFL you have to be able to play a position as well if you're a returner and I don't see him being a DB. South of the border there are many who could utilize his talent.

Remember when the NHL had a first round where it was 1 vs 16, 2 vs 15. etc, etc. etc. Those were unpredictable matchups and not the same old same old.

Best WM I have seen in a while.

Give me Habs/Bruins every single year. Best rivalry in hockey...and it isn't close.

That story about the Leafs and that kid was wonderful in so many ways.