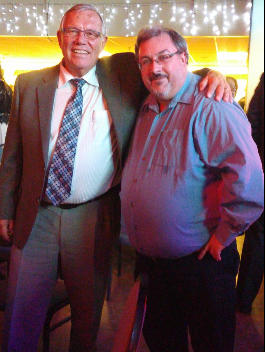 The Regina Thunder put on a fabulous dinner Saturday night at the Turvey Centre. The guest speaker was Ken Miller. "Coach" looks great! He hasn't aged one bit since he left here and he was warmly greeted by many at the event.

Miller told the crowd Tony Bennett may have left his heart in San Francisco, but he left his heart in Regina as he loved his time here.  As I said in Friday's "This and That", it is cruel fate he is not associated with a Grey Cup winner as a head coach because he should be.

Miller had a good speech about what it takes to be a champion, but it was what he said about Darian Durant that caught my attention. Miller believes Darian still has a lot of growth before he reaches the pinnacle of his career and if there was one piece of advice he would give him, it would be to abandon the gunslinger mentality and take one of a brain surgeon and just calmly do your job of slicing and dicing opposition defences. With no slight to Darian, I don't know if that can be done because its so hard to erase a mentality you have had for your entire career, but if he could evolve from a gunslinger to a brain surgeon, its bad news for the CFL.

Weston Dressler was at Saturday's event as well and I had a couple of minutes to chat with what is my favourite player on the roster. I asked him about the Greg Hardin signing and what he knows about his fellow UND grad who inked a contract on Friday. Weston then reminded me he has been here for seven years. Seven years??!! Man, now time flies.  As I told him on Saturday night, I remember a gentleman walking up to me about two months before Dressler showed up at rookie camp. I was wearing a CJME jacket so he asked what I did and when I told him sports, he told me about this kid from North Dakota named Dressler who had signed a contract with the football team up here and that he would wow us with his talent. Weston didn't know who that might be, but whoever it was he was right because number 7 has wowed us in his time in green and white,

For what its worth, I think the Greg Hardin signing is a big one for this football team. I have heard nothing but great things about him and if he came close to breaking Dressler's records at North Dakota while actually breaking a couple, the Riders have found themselves another player out of that program. I can't wait to see him at training camp and yes, I think he won't be a Chaz Schilens, Limas Sweed or Dwayne Jarrett.

I think its safe to say Joe Thornton punched his ticket out of San Jose the other night. Then again, this is a team which didn't make a lot of changes after losing to L-A last year in the playoffs after being up 3-zip. I have to think though if the Sharks don't make the playoffs, that the older group of guys like Thornton and Marleau could and likely will be playing elsewhere. Its obvious Big Joe and Doug Wilson have some issues and I'm guessing Wilson will be more than willing to trade Thornton if the right offer comes along.

While I'm not a Flames fan, I am resigned to thinking Johnny Hockey (Johnny Gaudreau) will be this year's rookie of the year. He is quite the player!

I just want to make sure I have this right. Michael Saunders got hurt when he stepped on a sprinkler head, Marcus Stroman was lost for the season after a bunting drill went wrong and now Jays outfielder Kevin Pillar is going to miss some time after a violent sneeze. Can't wait for the real season to start to see what happens. Talk about being snakebit!

We are one week closer to CFL training camps starting,

Have a good week!

Didn't see you at Thunder dinner or I would have come said HI!

The game's marquee position needs someone who doesn't make stupid mistakes. At one point, we could blame those mistakes on youth, but now he sometimes needs to make smarter decisions with football. I think he would agree with that,

Cutting defences apart with precision is what wins.

Johnny Hockey may win the Calder but Aaron Ekblad is the best first year player in the NHL and may not even be close.


I've seen Hardin play. He might be a little small, but we thought that about Dressler too when he first came.

I'm excited to see what he can do.


Don't know if you saw this Mitch, but Sherry Anderson is out and Trish Paulsen is in on the Lawton team. She will be awfully tough with Trish throwing 3rd rocks. Looks like the ladies provincial could just be a Lawton-Englot best of 7.

Wasn't at dinner, but can't disagree with Glen's comments. I would much rather take 8-10 yard completions than constant 30-35 yard passes downfield. You still need the odd long ball to keep the secondary on its toes, but age means experience and Darian needs to put the gunslinger mentality in the drawer.

Sounds like you're finally admitting Chaz Schillens was a bust. Everybody but the staff and media knew that by midseason last year.

Get rid of Wilson before you get rid of Thornton. Wilson hasn't been able to get that team to where it should have been. Ask your buddy Remenda about that!

Remenda knows the truth in SJ ,that's why he's finally gone from that grease fire organization.

As a hockey community, sure would be nice to hear more about the Pats on your blog. Rogers Hometown Hockey was here, kids and families were in attendance, Pats players were out in full force and downtown was hopping. Sunday afternoon was awesome downtown with the Pats players representing us. They're doing great things in our city, please make mention of it.

college #s mean squat. the level of competion isnt even close, you are playing against teenagers. lets not go over the moon about this hardins guys#s.see if can do it against pros.

lol and into a better situation? the oilers are a raging inferno of ineptness and losing habits.