The top 10 sporting moments for this blogger considering both national and local events.


10: THE SCOTTIES COMES TO MOOSE JAW AND MOOSE JAW SHINES

Since Mosaic Place opened, it has been host to many events, but the Scotties Tournament of Hearts was perhaps its biggest ever. Could Mosaic Place and the city of Moose Jaw host a successful event. The answer was a resounding yes!! I had the pleasure of hosting the Sportscage from Mosaic Place all week and it was a blast as people like Jennifer Jones and Vic Rauter dropped by. 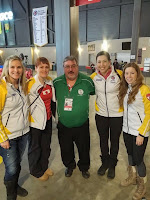 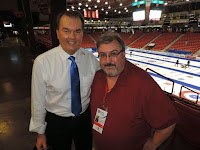 In the end,  Jones and her Winnipeg rink regained her crown as the queen of womens curling in Canada winning the final, but the real winner was Moose Jaw who showed Canada they are capable of hosting what they want to host with a venue that is more than ready to once again showcase itself as one.

9. REGINA PATS GET TO 2ND ROUND OF WHL PLAYOFFS

It has not been the best of times for the Regina Pats. A new ownership group came in prior to the start of the 2014-15 season as Anthony Marquart and his Queen City Sports and Entertainment consortium bought the club from the Parker family. The team took forever to hire a new head coach, but just before training camp, it was announced John Paddock would be the man in charge. It took a while for the Regina hockey community to get behind what was a very entertaining product for whatever reason, but when they did, they liked what they saw. The trade deadline saw the Pats get busy as they dealt away several players like star Morgan Klimchuk, but the trades didn't see the teams fortunes sink. Players like Jesse Gabrielle, Connor Hobbs fit right in while players like Austin Wagner, Colby Williams and Adam Brooks showed rapid improvement under Paddock. The team went to the playoffs where a first round matchup against Swift Current awaited them. Regina had not been to the 2nd round of the WHL playoffs since the 2006-2007 season, but on April 1, they went into Swift Current and beat the Broncos 4-0 to record a first round sweep and a trip to Round 2 where they were quickly dispatched by Brandon. This year's team is hovering around the 500 mark and whether or not a playoff appearance happens can't be determined, but with players like Sam Steel, Leschyshyn, Adam Brooks, Jordan Hollett and Liam Schioler around it is safe to say the future looks good (as do their new unis).


8. MIKE GIBSON'S ERA WITH THE REGINA RAMS GETS OFF TO A ROUGH START

When the Regina Rams took to the Mosaic Stadium turf on September 4 against the University of Alberta Golden Bears to start the 2015 Canada West football campaign, there was a new look to them. After many years on the sidelines during their junior and university days, Frank McCrystal was no longer holding the clipboard as former CFL assistant coach Mike Gibson had been chosen to take over. On October 30, Gibson walked off the field following a loss to the University of Saskatchewan Huskies still searching for his first win as a CIS head coach. Regina had their chances to win a couple of games including the last one to the Huskies, but a very porous defence led to their downfall. There were some bright spots with the brightest one perhaps being running back Atlee Simon who led the conference in rushing with 938 yards. The Gibson era did not start well, and there is a lot of concern about the future of the football team moving forward with many Regina high schoolers opting to play elsewhere or for the junior Thunder, but it is thought year 2 will see Gibson join McCrystal as Rams head coaches who have had a victory at the CIS level.


7.  JON RYAN HELPS THE SEAHAWKS GET TO THE SUPER BOWL 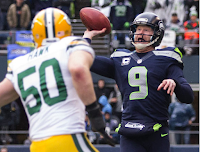 Being a Seahawks fan, I must admit it didn't look good as the Seahawks trailed the Green Bay Packers 16-0 with time ticking down in the 3rd quarter. It was then that Regina's Jon Ryan came through with the play that started to turn around what was a bizarre NFC Championship game. His touchdown toss got Seattle on the board and on their way to what was a devastating loss (more on that if you scroll down) two weeks later.

It was met with angst around the NHL, especially in Buffalo where the Sabres tanked the season in an attempt to land the most coveted junior hockey player since Sidney Crosby, but in the end, the hockey gods smiled on Edmonton on the night of the draft lottery. There was shock and disbelief when NHL Deputy Commissioner announced Connor McDavid was going to Edmonton who had landed yet another number one overall pick. Whether or not his arrival had something to do with it, the Oilers then went and cleaned house getting Peter Chiarelli as GM and Melville's Todd McLellan as head coach. The Oilers go into the start of 2016 actually close to a playoff spot and McDavid is ready to return from a broken collarbone that has sidelined his rookie season.  This long-time Oilers fan could not have been any happier when the ping-pong balls fell Edmonton's way.

2015 will not go down in the record books as a good year for the CFL. Where do you start? Starting quarterbacks went down week after week after week, refereeing continued to be scrutinized at a level never before seen, penalty flags had fans gnashing their teeth and TV ratings along with attendance at the games took a dip. The league did its best to make excuses saying the run of the Blue Jays and the womens World Cup had a part to play in it as did the fact the Toronto Argonauts were playing everywhere except home because of the Blue Jays. It came to a head during Grey Cup week in Winnipeg when a "new" logo was revealed that drew the ire of many across the land. While the run of the Ottawa REDBLACKS was a great story for the league, there were far more negatives than positives in 2015.

4. THE UFC COMES TO SASKATCHEWAN 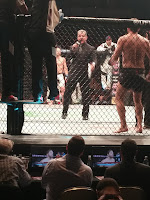 August 23 was a day many in Saskatchewan had been waiting for. Ever since the province of Saskatchewan organized a commission in March to sanction professional mixed martial arts cards, it was just a matter of time until the UFC came to the prairies.  UFC Fight Night 84 did not maybe have any marquee attractions, but there was a solid turnout at SaskTel Centre in Saskatoon for the first ever card with the main event being Max Holloway against Charles Oliviera. That bout ended before it started because of a freak injury to Oliviera, but those in attendance were pretty happy with what they saw. I have no idea when the UFC will be back in Saskatchewan, and I am guessing it will be in places like Winnipeg, Calgary and Edmonton before it returns to the wheat province, but that night was one many UFC fans in Saskatchewan relished in.

I am a Blue Jays fan, but when it comes right down to it, I bleed Cubbie blue. While the Jays run was outstanding, it paled in comparison to what was happening at Wrigley Field for this blogger.  It was a great day when Joe Maddon signed on to become the team's manager as he had a very young group to work with. When the season started, I thought a 500 season would be OK with 2016 being the season to make noise. The season to make noise was apparently 2015. Led by the likes of National League Rookie of the year Kris Bryant, Anthony Rizzo and the suddenly dominant Jake Arrieta, the Cubs had the 3rd best record in the National League and after disposing of Pittsburgh in the Wild-Card game and St. Louis in the National League Divisional Series, they fell to the Mets in the National League Championship Series. It was disappointing not to see the Cubs in the World Series, but I never expected them to be close this year. Is next year the year? Time will tell.

Super Bowl 49. A game said by those who watch the NFL Network to be the greatest game ever played. For those who aren't fans of the Seattle Seahawks, it probably was. As a Seahawks fan since their inception in the mid 70's, there was happiness and elation when the team captured their first Super Bowl beating Denver in Super Bowl 48 and the chance was there to repeat as going into the 4th quarter, they had a 24-14 lead. It was then that Tom Brady became Tom Brady and well, you know the rest. Brady threw touchdown passes to Danny Amendola and Julian Edelman giving the Patriots the lead. Seattle got the ball with just over two minutes to play, but it looked like New England would win yet another Super Bowl until Jermaine Kearse made an improbable catch which ended up with Seattle at the ball at the one in the closing seconds. With the ball at the  one yard line and arguably the best running back in the NFL in the backfield, the Seahawks decided to throw instead of give the ball to Marshawn Lynch leading to this which made Malcolm Butler a household name.

13 men on the field in 2009, Steve Bartman in 2003 and now this.  It was a loss that didn't go away for a long time much like the other ones. The call is still being debated and in truth, there is no way in knowing whether or not Lynch would have gotten in. Chances are he would have though and Seattle would have been a two-time champ.

1. THE MESS AT MOSAIC 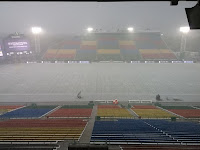 A storm blew through Mosaic Stadium just moments before the first exhibition game of the year against Calgary. Little did we know how symbolic that was as it was a dark, stormy season in Riderville as you all know. It started with the season-ending injury to Darian Durant and continued from there. With the team still in search of first win going into the Labour Day Classic, GM Brendan Taman and Head Coach Corey Chamblin were told their services were no longer needed. Jeremy O'Day and Bob Dyce took over in the second half with the team getting three wins to finish the season at a CFL worst 3-15. As you all know, new president and CEO Craig Reynolds then tipped the CFL foundation over by hiring Eskimos head coach Chris Jones as head coach, general manager and vice-president of football operations. It will be his job to bring the Riders back to respectability and then some as the last season of football at Mosaic is to be played with the new stadium just about ready to move into.

There ya go. My top 10! I'm sure your list would differ somewhat and that's cool!

Knowing you, I thought JR's TD pass would have been higher.

Have a Happy New Year my friend!

Until Mike Gibson wakes up and keeps Regina's best football players here, that program will continue to sit in the shadows of the Thunder. McAulay knows what he is doing and Gibson doesn't. One of the best football classes city-wide we have seen in years and three have committed. That spells no turnaround anytime soon.