Thank you to legendary Edmonton broadcaster Bryn Griffiths for this picture. That is Edmonton Oilers hockey and hockey history right there when it comes to this blogger. The ceremony for Glen Sather who was the architect of what I say was the greatest teams the NHL had seen was simply outstanding with the game that followed being one that wasn't bad either.

The walk from Sather's customary spot in the press box down to ice level was just powerful in so many ways. He was joined on that walk by Oilers who have done so much for the franchise, but won't be recognized with banners, he was able to shake the hands of many fans who grew up in Edmonton watching those teams perform the magic on ice that they did during the Stanley Cup years and then he was met with thunderous applause as his banner was raised high into the rafters on Rexall Place on a night that was long over-due, but on a night that had to be done before Rexall Place stops being home to Oilers hockey as Rogers Place is ready to open for next year.  I can only hope young children who were in attendance were told by Dad or whoever about the greatness that had assembled on the ice for the ceremony and how they played hockey the way the game should be played.

It seemed like with all of those Edmonton players who brought the organization to prominence with the exception of Wayne Gretzky in attendance as if something rubbed off on both the New York Rangers and Edmonton Oilers as they played a wide-open game that was very fan friendly and reminded many of the high scoring nights they used to watch regularly with Edmonton winning it 7-5 to cap off their first 5-0 homestand in 28 years.  I don't know if playoff hockey is returning to Edmonton this year, but they are FINALLY on the right track.

Friday night was a night where the heart of this Oilers fan grew three sizes. Those who root for the Oil like me know exactly where I am coming from.

While that picture is great, this one just makes me howl. This is so awesome for so many reasons. 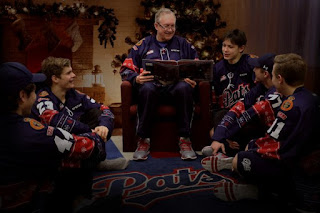 Well done by the Pats for this promo shot as they market their Christmas jerseys as Head Coach (Grandpa) John Paddock reads to his young squad.  That young squad didn't beat the two best teams in the league this week, but they were right there with both the Calgary Hitmen and Kelowna Rockets and they did manage to hang on after leading another good team in Lethbridge by a score of 6-1 to beat them Saturday.  That team isn't going to win every night, but they are fun to watch.

I can only imagine what the streets of Las Vegas were like late Saturday night and into Sunday morning as the Irish proudly celebrated a Conor McGregor victory at UFC 194.  I thought the cocky Irishman would beat Aldo, but I didn't think he would do it in 12 seconds and I don't think many UFC fans thought that either. It was over before you knew it. Aldo, who had a genuine hate for McGregor, got one-punched! All the hype for that much-delayed and heavily-anticipated fight and it went 12 seconds. Can you say letdown boys and girls? Can you say rematch boys and girls? Somewhere Dana White is smiling knowing he has already set up a Rousey-Holm rematch that will bring big PPV $$ and now he has another one to set up. While on the topic of UFC 194, never, ever let Chris Weidman's father into the octagon again whether he wins or loses.

The newest issue of Cosmo caught my eye on the weekend. Why is that?  You tell me!!

Blake Shelton, what were you thinking?  WOW!!! Double WOW!!!!

This is the last season for Jose Bautista and Edwin Encarnacion in a Blue Jays uniform, Both have been outstanding in their Toronto careers, but both will command huge money, probably upwards of 18-20 million per season. Who would you keep? I don't think the team will keep both so who do you move and when do you make such a move.

No surprise to see Mike Johnston let go in Pittsburgh. As has been discussed before, that team is missing something, Then again, as discussed before this is a team that added something in Phil Kessel and he hasn't exactly been a positive when it comes to his head coaches.

Can't get away with discussing the CFL and it appears as if that nasty "compensation" word is coming up again, but it shouldn't.  The Eskimos are apparently ready to make Jason Maas their head coach, but the REDBLACKS are saying they want compensation. Did the newest franchise not read the CFL handbook or at least the part that says assistants can move from one team to another as long as there is a promotion which there certainly is in this case. As was the case with Chris Jones when the request was made by the Riders to speak to him, the Eskimos could have said no and Ottawa could have said no to the request to speak with Maas. Story over.  If you need to change the rule, you change it, but you can't do it now. Stop with the whining!  Oh Craig Reynolds, look at what you've done. Shame, shame, shame (with that comment dripping in sarcasm)!!

Congrats to Bob Dyce for landing on his feet in Ottawa. I didn't think it would take long for him to find CFL employment once his days in Riderville were over.

The Russell Wilson to Doug Baldwin connection has become the most dangerous combo in the NFL. Seven touchdowns in three weeks between that pair as the Seahawks roll over Baltimore. Where was this at the start of the season? Someone on NFL Radio suggested the Super Bowl 50 matchup could be a repeat of the Super Bowl 40 matchup with Seattle vs Pittsburgh. I would be OK with that, but I don't see either team being at that game.

The Carolina Panthers might actually go 16-0. They won't win the Super Bowl and I am not even sure if they will get to the Super Bowl, but they might just run the table. They haven't lost since Cam Newton flipped his car over last year.

Andy Dalton breaks his thumb and there should be optimism in Cincinnati. Considering Dalton's playoff failures, I would think Bengals fans should be OK with the fact it might be AJ McCarron for the rest of the year. They could actually win that first playoff game.

Why do I get the feeling "The Leafs new logo" is going to dominate headlines for a while. SIGHHHH!!!

Should I have started watching "Quantico" from the get-go. Is it too late to start watching it now?

Once again, Blake Shelton--what the hell were you thinking!

have a great week

This whole compensation thing is a joke. Reynolds invoked a firestorm by getting Jones and his staff here. No one has ever paid compensation in the CFL for years so why should it start now? If the CFL wants to make a rule change calling for compensation then that is fine, but it takes effect at the end of the 2016 season and starts with any hirings after that. If the CFL were to reverse course and say after the fact the Riders have to give compensation to Edmonton or the Eskimos must give something back to Ottawa, it will make the CFL look like a joke.

Thanx for the blog read today Mr. Blair. Have a good week.

Great debate on Bautista vs Edwing. I think Jays trade one of them somewhere (Cleveland perhaps as a goodbye gift from Shapiro) for one of their pitchers. Jose is the undoubted leader of the team so I think it would be Edwin. The question is when do you do it? I am guessing it would have to be before spring training.

That Miranda Lambert has sure got a great set of HITS?!!! right? that's what y'all are thinking of right, were those her HITS, or did someone else make them for her...as I, like you MB, have been summoned to tag along shopping and see other fishwrapper mags I think ML possibly was saddling up her horses at another barn,.

Scruff, you bought that Cosmo to find out how to lose 5 lbs right? Why else would you get it?

Can't really argue with Rob on this one.

Some great pictures this week Scruffy!