Austin Wagner Not Coming Back To Pats 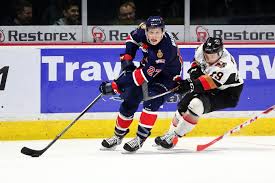 If the Regina Pats were counting on forward Austin Wagner returning to the team in their quest to win the WHL Championship, and the Mastercard Memorial Cup, they can forget about it.

Prior to Friday night's game in Red Deer, assistant coach Dave Struch confirmed the Los Angeles Kings have informed the hockey club Wagner will not be returned to junior in an interview with Pats play-by-play man Phil Andrews.

"We expected him to be staying with the Kings, but there was always a glimmer of hope that someone of his calibre would be returned." Struch said. "We've been working hard without him, so we will just continue on and try to get better as we move forward.

Wagner had 66 points in the regular season last year, and then scored 16 goals in the playoffs to lead the team.

He suffered a dislocated bicep tendon and torn labrum in Game 3 of the Eastern Conference final against Lethbridge that forced him to undergo off-season surgery.  He is in the final stages of rehabbing that injury which led some to believe he would be returned to junior by the Kings who took him in the 5th round of the 2015 draft.

The fact Wagner will stay with the Ontario Reign of the American Hockey League means at this time Matt Bradley, Wyatt Sloboshan and Tyler Brown remain the team's overage players.
at 12/01/2017

Lol patsies grasping at straws now, you guys are going to be an embarrassment in May