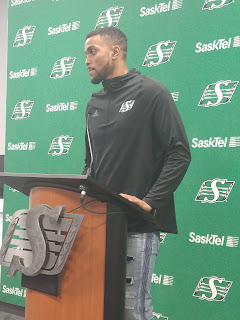 The Saskatchewan Roughriders announced national quarterback Brandon Bridge has signed a one-year contract extension to remain with the team through the 2018 season.

Bridge (6’5 – 235 lbs.) will return to the Riders for his fourth CFL season and third with the Green and White. The Toronto, Ontario native spent his rookie campaign with the Montreal Alouettes after being selected in the fourth round (31st overall) of the 2015 CFL Draft. He signed with the Riders in August, 2016.

After seeing limited action as a backup in 2016, Bridge dressed for all 18 regular-season games last season and completed 92 of 138 pass attempts for 1,236 yards and 10 touchdowns. In his lone start of the season, the 25-year-old threw for 231 yards and three touchdowns as the Riders picked up a road win in Hamilton.

He went on to complete 11 of 21 passes for 141 yards and one touchdown in the playoffs.

It is a real positive to get Brandon under contract for next season so we can continue to build with our core group of players,” stated Chris Jones, Riders Vice-President of Football Operations, General Manager and Head Coach. “Brandon is a good young quarterback who has shown a lot of growth. A player with his size, athletic ability and competitive drive has unlimited potential.”


Another solid move by Jones!


Does this mean an end to the Collaros talk? Is he signing so that he is the starter? Any word on a QB coach?