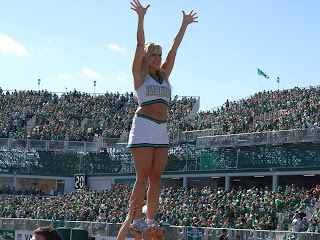 Another Labour Day has come and gone and once again Rider Nation, we can count on four things---life, death. taxes and beating the Bombers on the first Sunday of September.

Riders head coach Corey Chamblin was very prophetic on Saturday when he said the Bombers were an unknown team because of their rotating parts and it would take some time to learn some tendencies and it might force them to guess at times. The first half saw that as the Riders struggled, but they came out of the locker-room at half-time and owned the Bombers in the second half to improve to a never before seen 8-1.

Just some thoughts on what transpired on the Mosaic turf

--Darian Durant was at his best Sunday running and throwing the football. When he does that he is very tough to beat.

--Was it a sign that Geroy Simon is finally ready to be a part of the Riders offense? I hope so.

--Yes, Dwight Anderson blew his cool, but he also made another big play in the 4th quarter. Anderson should have kept his temper in check. but you could see the frustration growing on that Rider defense because of some questionable penalties. How a guy can be backpedalling and yet still be interfered with is a mystery to me yet Anderson was called for PI and how Terrell Maze gets flagged on a play where the ball is bouncing down the field towards their feet is also a mystery to me. Fans got to see a different side of Anderson in the kid interview segment that was done. All the guys have told me is a completely different cat off the field than he is on. He's not the only guy to be wired like that and he won't be the last one.

--There is just a quiet confidence brimming throughout the dressing room and its led by Chamblin. Deep down, I know he and many others are loving what's going on, but they are also smart enough to realize that the house of cards can come tumbling at any second. They aren't going to start boasting to anyone like the Bombers did a few years ago with Swaggerville.

--I had no problem with Justin Goltz mocking Kory Sheets' TD celebration or his getting dressed celebration which he has done before. Its not outlandish like what the Stamps used to do years ago. The Goltz celebration was original and he's trying to get his guys pumped up. I'm OK with it.

--At what point are we going to sit back and marvel at the play of Ricky Schmitt. The guy can punt!

--I wonder if Craig Dickenson thinks about his move not to come early with the rest of the coaches which ultimately resulted in him leaving. Methinks Craig made a mistake.

--How about security dealing with the guy that ran across the field with his shirt off? They just sat there and watched him. DO SOMETHING!!!!

--There weren't the amount of Winnipeggers that are usually here, but it was good to see a bunch of them come to support their club even though they knew they would go home a loser again. The Labour Day Classic needs a solid contingent of Winnipeg fans each and every year.

On Saturday in between Coach Chamblin and Winnipeg coach Tim Burke's respective news conferences, Riders colour man Carm Carteri was talking to some Winnipeg journalists and a very good question came up. With the Riders playing the way they are and excelling in so many areas, who has under-performed? Is there anyone? One Winnipeg reporter said the answer might be Geroy and while the argument could be made for that, it was squashed with his effort on Sunday,

Just some other thoughts

--The PGA and the networks had better realize Graham DeLaet is here and he isn't going away anytime soon. The Weyburn golfer has certainly shot up into a role of prominence this year and his play in the last two weeks have to have turned some heads. It was frustrating not to see Graham get more TV time this weekend, but he did get some and I guess we shouldn't argue about that. It just bothers me when Tiger is not a factor in the event, yet we have to see every shot and every reaction of his. Share the wealth!! I know Tiger means more to the game than some Canadian, but lets show the top players every week and if Tiger isn't performing well---then too bad.  By the way, is it just me or does Johnny Miller have a hate on for Graham. The ex-golfer and NBC analyst seemed to be a little critical of the Canadian for no reason.

--There's a lot of talk about Milos Raonic and I understand it, but he isn't close to having the year that DeLaet is having. At least he isn't in my mind. Yes, he is doing great things for tennis in this country, but compare his season to Graham's and it isn't close.

--Seeing Justin Morneau get traded to the Pittsburgh Pirates makes me wonder if the Canadian will end up sticking with the Pirates or if he'll look elsewhere for work next year. I would love to see Morneau playing first base for the Blue Jays.  Nothing against Adam Lind, but I think Morneau is a more complete player and would be a big plus for Toronto.

-- I bet a friend of mine $20 at the start of the season that the Cubs would be within 10 games of Toronto's win total this year. That looks good as we head into September.

--Vin Scully has announced that he is coming back for a 65th season behind the mic with the L-A Dodgers. There is no one like Scully anywhere. His style is one in a million. He could make reading the phonebook riveting.  Its just a treasure to hear him call a baseball game.

--Another death on the highway between Regina and Estevan this weekend. How much longer will it be until the provincial government moves the twinning of Highways 39 and 6 up on their grand plan? It has to be done with all the truck traffic on that road. Lives will be saved. The sooner, the better.

--The story from Kakhewistihaw where it would seem as if the person who killed that 6 year old boy was a child is just sad and asks a lot of questions.

--A quote from a Twitter follower that all parents should ask today. Some kids are excited at the start of another school year and others are frightened knowing the bullying might resume. We don't know how true that is for some kids which is sad.

--At the end of three quarters of the Stampeders-Eskimos game, I was left wondering if Kavis Reed had one quarter left as Edmonton head coach. The Eskimos seem reluctant to let him go, but they aren't getting any better. The Eskimos then put together a 4th quarter comeback that was just about one of the greatest ones we had ever seen in sports as they rallied from down 30 with nine minutes to go to only lose by 3 with a chance at the end to tie the game. Was that enough to save Reed? With another game in just four days, I would doubt the Eskimos would have made the change with such little time between games, but they have to start thinking about next year and you have to wonder if Calgary wins by one or 41 if that will be it in Edmonton.

--With Winnipeg likely looking for a new coach and Edmonton and Ottawa looking for guys, is it safe to say that Paul Lapolice will wait to see who writes the biggest cheque. I'd be shocked to see him end up back in the land of the Bombers. but in the CFL who knows?

--Why is Rod Black seemingly calling all Rider games this year? How many of the nine games that the Riders have played this year been done by Chris Cuthbert?

Johnny miller has a hate on for everyone....including himself I think......guy can't say anything good about anything

This Labour Day weekend belonged to DeLaet. He is on the verge of a major breakthrough and yeah Johnny Miller was an ass.

The Durant and Simon haters are quiet this week. HMMMMMMMM!!!

Sam Steel is the best player the Pats have. Maybe they should have asked for exceptional status on him. After breaking camp its pretty much the same team that ended last season in the bottom four. I wonder if the talent is there to get off to a good start. Should know pretty soon if they have done enough over the off season in the way of re-tooling.

I actually thought it was pretty funny when the streaker ran onto the field. It seemed like he didn’t know what to do when no one was chasing him, then he seemed to just give up, almost like he said “that was no fun, no one was chasing me”. I liked it

Good point on Craig Dickenson. What a fool! Our special teams haven't missed one beat without him.

DeLaet has been sensational in the last two weeks. He can't play like that every week, but lets enjoy it when he does play well.

Anonymous said...
This comment has been removed by a blog administrator.
9/03/2013

I agree with you on Simon. Seeing him establish himself in 2nd half of season would make it that much tougher.

Anderson has to settle his emotions down. Why won't Chamblin tell him to sit down for a week like he did with Ferri? Maybe Jamie Nye will ask Chamblin that question this week.

If Raonic can lead Canada past the Serbs with Djokovic in a couple of weeks, then he will have had an amazing season. An ATP Tour win, the Final of the Canadian Open and huge Davis Cup wins so far this season taking Canada into unchartered territory in that event. Milos has had an amazing year...as has DeLaet. To compare them in impossible. Just enjoy them on their own merits.

It's pretty simple Mitch, the tennis guy is from the center of the universe Delaet is from little old Weyburn.