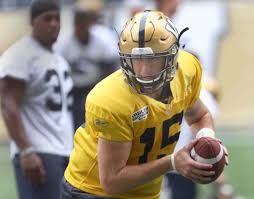 Matt Nichols is getting a fresh start and a new lease on being a starting CFL quarterback.
The Winnipeg Blue Bombers announced Tuesday that Nichols will start Saturday's annual Banjo Bowl against the Saskatchewan Roughriders less than a week after being acquired in a trade from Edmonton.
The 28-year-old ran out of opportunity in Edmonton with the return of star pivot Mike Reilly to action, but now he'll get a chance to lead a Bomber team in need of a spark.

“We’re constantly looking to improve in all three phases. Offence included," said Head Coach Mike O'Shea. "We’re making changes right now. Matt Nichols is going to get the start at quarterback and we’re going to make some other personnel changes to get this thing back on track.”
The move comes as part of a multi-faceted response to the Bombers' 37-19 loss to the Roughriders in last weekend's annual Labour Day clash. An early turnover helped the Bombers jump out to a 10-0 lead, but the Riders scored 29 unanswered points on the way to a one-sided victory.
Brian Brohm struggled in his second career start despite completing 21 of 26 passes for 184 yards, while the run game was virtually non-existent. The defence had no answer for the Riders' second-half surge and the special teams allowed a 60-yard punt return touchdown by Manitoba native Nic Demski to spark a sudden turning point.
First thing Tuesday morning the team announced the dismissal of Special Teams Coach Pat Tracey as O'Shea looks to improve his team in any way possible.
“We’re not out of it," said O'Shea. "We’ve got eight games left and we need to make a run. This is a move I really felt strong about that we needed to make.
“None of us are satisfied with where we’re at," he added. "None of us are satisfied with the play we’re getting and the position the players are in.”

With eight games left the Bombers remain well within striking distance, just a game back of the BC Lions for a playoff spot in the West. But they've lost four straight games, including three since star pivot Drew Willy was sidelined.
Willy is on track to return either in late September or early October, but in the meantime it'll be up to Nichols to try and improve an offence that sits last in the CFL with 312.9 yards per game.
“Six years’ experience," O'Shea said of his reason to go with Nichols. "I think he gives us a good chance in terms of understanding CFL defences, the experiences he’s had. I think he’s got some playmaking ability. I think he’ll pick up the offence very well and we’ll run it.”
Nichols owns a career 82.1 quarterback rating with 19 touchdowns and 18 interceptions. This year, however, in relief for Reilly, he was intercepted 10 times compared to eight touchdown passes and a 75.6 QB rating.

I guess we're finding out how good Richie Hall is. Could he be next?