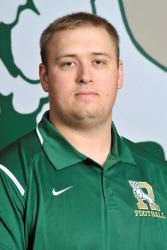 The Saskatchewan Roughriders and Calgary Stampeders have made a trade.
The Riders send offensive lineman Randy Richards to Calgary for Aaron Picton.
The Regina Ram was taken by the Stampeders in the 6th round of the 2014 CFL draft.
Richards played in two games for the Riders and made headlines for a clothesline tackle on Calgary's Tim Brown during a game at Mosaic Stadium August 22 which led to an ejection and a subsequent hail-mary touchdown from Bo Levi Mitchell to Eric Rogers that sent the Stampeders on their way to a victory.
The Riders also announced on Tuesday the signing of wide receiver Laquan Williams. The University of Maryland product spent time in the NFL with the Baltimore Ravens as a kick returner.
They also announced the release of WR Matt Norzil and RB Steven Miller.
(620 CKRM)

O'Day has now made two moves

What was O'Day? Am I noticing a trend?

Miller had a knack of running to the first tackler.

Not another local boy, nepotism mentality has set in on the Rrs football club.