Zach Collaros Is Done For the Season 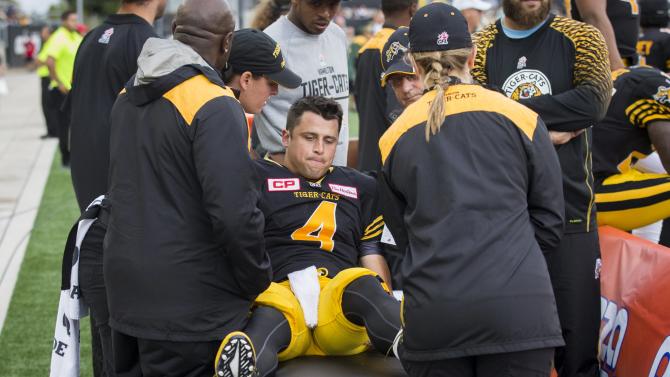 The Hamilton Tiger-Cats announced Monday that quarterback Zach Collaros will miss the remainder of the 2015 season with a torn anterior cruciate ligament in his right knee, suffered early in the second quarter of Saturday s 25-18 loss to Edmonton at Tim Hortons Field in Hamilton. No date for surgery has been determined.

Collaros is leading the Canadian Football League in passing yards with 3,376, in touchdown passes with 25, and in quarterback rating at 113.7. His 70.2 completion percentage ranks second. The 27-year-old graduate of the University of Cincinnati is in his second season with Hamilton following two seasons with the Toronto Argonauts. He has thrown for 9,054 career yards, with a completion percentage of 67.3 percent, and a rating of 101.2. He is signed through the 2016 season with the Ticats.


Hamilton leads the CFL s East Division with an 8-4 record and is now on a Bye week. The Ticats next home game is scheduled for Friday, October 2 versus Calgary.

How many QB's have been on 6 game list this year. Has to be a dozen! Another reason why the CFL has been bad this year!

Like Darian and several others, a tackle didn't cause the injury. Maybe natural grass where possible is the answer. This wonderful new turf is killing our league.

The league has Austin by the short and curlys. He will pay whatever price has to be paid to get an experienced QB. It is the only way they win.

What happened to Stafford?