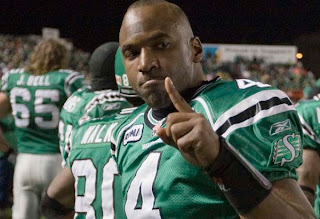 The Saskatchewan Roughrider Football Club announced today that import quarterback Darian Durant has signed an extension with the team. Financial details of the signing were not released.

Durant solidified himself as the Riders starting quarterback in 2009. He completed 339 of 561 pass attempts for 4,348 yards and 24 touchdowns in 18 regular season games. In addition he had 60 carries for 501 yards and three touchdowns.

In 2009, the 27-year old was named a West Division All-Star and was the Riders’ nominee for Most Outstanding Player.

Since joining the Green and White in 2006, the North Carolina product has played 59 games and completed 417 of 691 pass attempts for 5,484 yards and 31 touchdowns, while adding an additional 725 yards off 88 carries including four touchdowns.

Best news of the off-season!

Great news..
For all those who are wishing to have Kerry Joseph signed as a backup, I think that would do more harm than good. Sorry, Kerry has proven since leaving here that he was over priced and not a great quarterback.
Let's develope our young stable of Qb's. I think Harrell, given some time will be good.