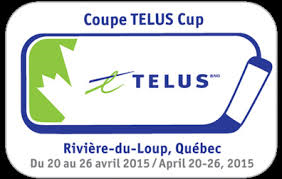 Conner Chaulk scored once and added two assists, Jake Tesarowski had one of each and Riley Woods had two helpers of his own to help the Regina Pat Canadians rally past the Strathmore Bisons 4-2 on Wednesday and remain the only undefeated team at the 2015 TELUS Cup.

The key for the Pat Canadians, as it was the first two days, was the power play; Regina scored three times on nine chances with the man advantage, and is a tournament-leading 8-for-28 (28.6%) through three games.
It was the Bisons who got on the board first after Gary Haden dropped for Barrett Sheen, who fired a wrist shot past Regina goaltender Curtis Meger just 62 seconds after the puck dropped.
That would be the lone goal of the first period, despite Regina holding a 13-8 advantage in shots on goal.
The Pat Canadians finally answered 39 seconds into the second period on a power play goal off the stick of Owen Sillinger, but Austin Wong restored the Strathmore lead at 8:22 of the middle frame, sending the Pacific Region champions to the dressing room with a one-goal advantage.
Regina managed just nine shots on goal in the third period but made good on three of them to take over,
Tesarowski tied the game at 7:23 on another Pat Canadians power play, and Chaulk one-timed a rebound past Bisons netminder Kurtis Chapman just 50 seconds after that to give Regina its first lead.
Arthur Miller roofed a loose puck from in close midway through the period to make it 4-2, chasing Chapman and giving netminder Cody Campbell his first action of the entire postseason.
The much-anticipated game did not disappoint, with both teams played a feisty and heavy-hitting game from puck drop to the final whistle, combining for 38 minutes in penalties and 17 power play opportunities.
Regina will go for four wins in as many days Thursday when it takes on the host Albatros du Collège Notre-Dame (7:30 p.m. ET),