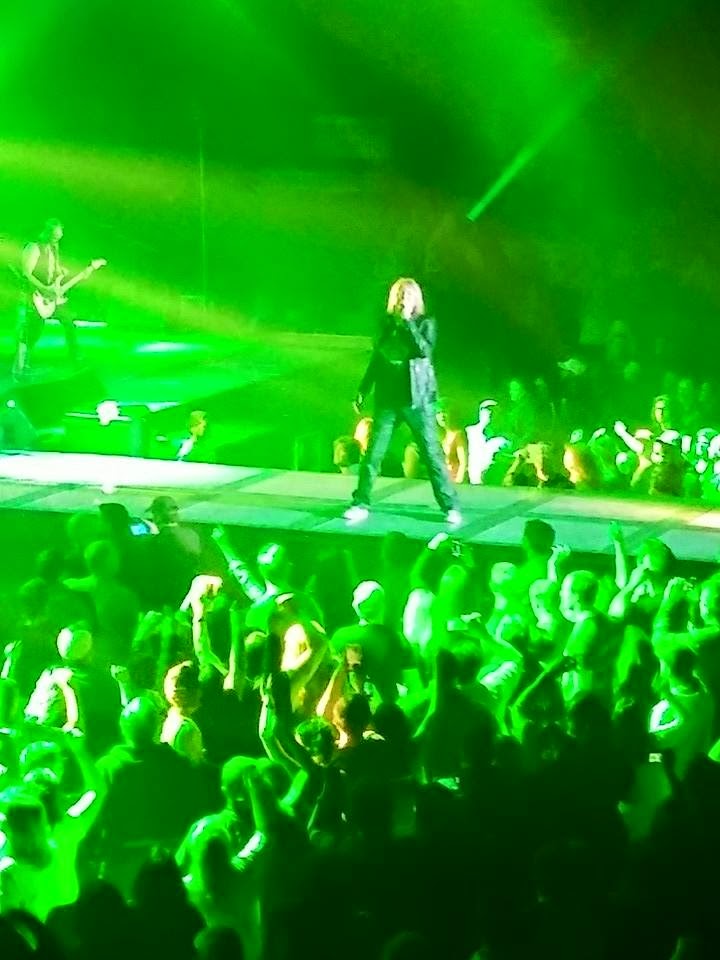 A busy, busy, busy weekend in the YQR for yours truly that finished off with a few thousand people at the Brandt Centre checking out 80's rockers Def Leppard. Without a doubt, one of my favourite all time bands. They aren't the same as they were in their hey-day, but its close and they still bring it.  A sold out crowd went back in time as they performed all their great songs to a crowd that enjoyed every second of it. Saskatoon's One Bad Son was pretty damn good too.  LOVED IT!! 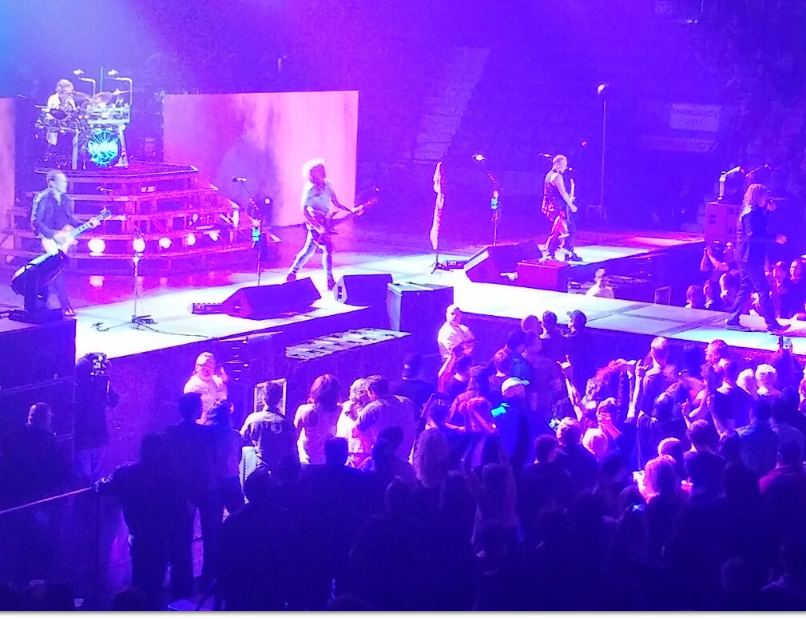 The weekend started Friday night at the Highland Curling Club in Regina as the stars of High Impact Wrestling did their thing at their biggest card of the year--Spring Meltdown.

As is usually the case, you will usually find me around the venue and I was there calling the mayhem for Access 7 along with Locker Talk host Pete Paczko.. Mayhem is a good word to describe what was just a great night. The guys that do what they do in front of crowds large or small just bring it every time they walk through the curtain. Its not easy being an independent pro wrestler and these guys put their body on the line for very limited $$$ unlike those who work for the WWE. The show at the Highland was fantastic and many people walked out entertained. The crew that is assembled are very good people working hard to entertain and certainly did that Friday.


I even had a fan ( a citizen of Gronkville as I refer to the audience as)  make a sign for yours truly which is a first.... 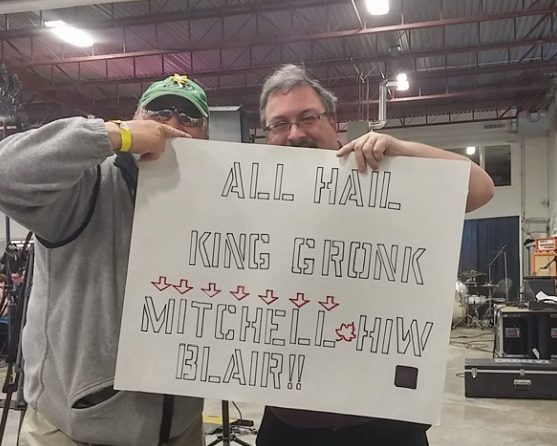 Surprisingly, there were no spelling mistakes!


Saturday was a trip over to the Brandt Centre to catch the Harlem Globetrotters...

Its the first time I had seen the Globetrotters in over a decade. The schtick is still the same and its just as entertaining. The Washington Generals haven't won a game since 1971! Rider fans thought they had it bad in the 80's! No, I don't know if John Herrera is working for the Generals!


Do you remember the Simpsons episode where Homer goes to space and problems arise with an inanimate carbon rod saving the day. The rod becomes a celebrity and there is a parade held for it. Why do I think you could do the same thing with the ping-pong ball that gave the Edmonton Oilers Connor McDavid! Who's kidding who, if the kid brings glory back to Northern Alberta, the argument could be made to hang the banner of a ping-pong ball alongside that of Gretzky, Coffey, Messier and the others. The changes have been fast and furious in Edmonton since the Oilers won the draft lottery and they are showing the young man they are serious about ending their days of being a doormat. The question I have now is what player will go and for who. I still think its Taylor Hall, but yes Oiler fans the days of Jordan Eberle continuing his career in Edmonton could be limited. McDavid arrives, Chiarelli comes on board and Lowe hits the proverbial road. No complaints from this guy! None!

The Oilers are in Saskatoon on September 26th to play the Minnesota Wild in an NHL pre-season game. Would Edmonton bring McDavid to the Bridge City? Its buyer beware, but I might want to take the chance on that one.

Congratulations to the Calgary Flames for beating the Vancouver Canucks. I hope you are rewarded for that by getting blasted by Anaheim. There is no doubt I want the Ducks to take that series, but once again thank you Calgary for ridding us of Vancouver.

The Saturday night Stanley Cup games were just outstanding. That is the way hockey should be played. I don't think you can argue that.

Brendan Gallagher's goal to give the Canadiens their series against Ottawa wasn't ruled a high stick? It looked that way to me when I saw the highlights.

I think its safe to say the St. Louis Blues have taken the torch from the San Jose Sharks as a good regular season team and a bad playoff team. Three straight years they have had Cup winning capabilities and they are out in Round 1. Too many good players on that team not to go further three years in a row. Is Ken Hitchcock going to take the fall for that?

A couple of stories you should read this week. A couple of very good stories.

The first one is from Hayley Wickenheiser who opens up about life as an athlete and how its not as easy and glamourous as one might think. You can see that one here.

The other comes from Baltimore Ravens coach John Harbaugh and it is a fascinating read on being a head coach and why football matters. Check that one out right here

A question for baseball fans. We all know what Pete Rose did and we all know what Barry Bonds did. If you could only vote one into the baseball Hall-of-Fame would it be Rose or Bonds? One gambled on the sport, but not when he was a player while the other violated the rules while a player to make him better. Who would you put in?

When the Kansas City Royals take the field are they doing so now to the music of the NwO? These guys are becoming the Broad Street Bullies of Baseball.  Pitcher Yordano Ventura has now been suspended twice in the first month of the season for instigating the benches to empty. After what happened with Jose Bautista this week, is it safe to say the first series between the Jays and Royals could be a little explosive.

Drew Willy is making $250 thousand and he wants more? What has he done to get himself the money he is getting now and why does he believe he should get more. Do something if you want more money Drew! Your resume doesn't exactly equal that of quarterbacks like Lulay, Mitchell and Durant who all have quarterbacked Grey Cup winning teams in your division.  FWIW: Does anyone see the Bombers as it stands right now being at the same level the Stamps, Eskimos and Riders are at. I honestly see them fighting for a crossover spot right now and that's the best they can do.  That opinion may change by the time the season starts, but I just don't see them being in the top 3 in the West.

Finally, this is the newest thing coming to hockey games at the University of Nebraska-Omaha. I think you might agree this MUST be something we see at the Brandt Centre, Mosaic Stadium, Currie Field or wherever. Yes, its a taco cannon!

First, it was Taco in a bag and now this!

Have a great week everyone!

Rose over Bonds. Easy choice. Rose did something wrong after he played; Bonds cheated while he played.

The Harbaugh article is something ALL football coaches should read!

Don't know if Gallagher's goal was a good one or not, but Ottawa had the equalizer late and the ref blew it down.

Not a fan of either team so I have no weight in the debate, but that game should have gone to OT.

It was like being back in 1987 (and the two girls in the row in front of me thought that too from their wardrobe)! YIKES!

Went to High Impact Wrestling for the first time.

The crowd is a little interesting, but the "wrestling" was great.

Those guys are pretty good. The 8 man match was wild!

I gotta go with Rose too!

I was impressed with the quality of the wrestling, but four and a half hours is WAY too long. Too many intermissions, and what is with the band? I won't be back as my kids would never be able to grind out an evening like that.

There is no and will be no better drummer in the world than Def Leppard's drummer.

The guy is literally amazing to do what he does with just one arm.

I agree with Vanstone's column this morning. The ref at the Globetrotters game was the star of the show.

Leppard rocked Enmax in Lethbridge too.
Hey Ryan..Plenty of Cougars wanting to be part of the Leppard Liiter here as well.
..Didn't get great seats but the Mother daugher (or cute girl with older friend still clinging.)combo in matching hot pink tank tops with "pour some sugar on me" written on front Danced away to the tunes a few rows in front .only thing missing was a Brass Pole..BUT .then a guy who looked like the dad from The Goldbergs was dancing too and I was miserable with my life. ..great being back in Lethbridge reminded me of the college years

My world is better knowing there is such a thing as a taco cannon out there.

You're learning from Pedersen Scruff. All you have to do is start name-dropping and how great you are and you'll be right up there with your nose in the clouds looking down on us like he is.

Neither one deserves to be in the Hall of Fame. That's reserved for people your kids can look up to.
But you asked for one so I say, Rose.

saw def leppard in Saskatoon. Agreed, fantastic show. all the hits none of the crap. 20 years after they were relevant and there was 7,500 people there. pretty awesome.