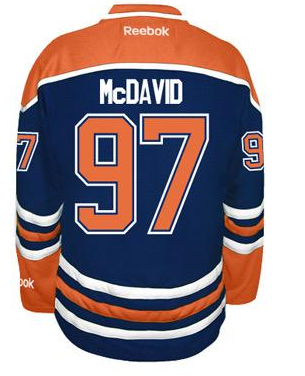 Who's kidding who, I was pretty happy when Bill Daly revealed the "gold card" with the Oilers logo on it Saturday night to end the NHL draft lottery-----and what a tedious affair that was (Thanks Rogers!!).  I didn't think the Oilers would win the McDavid sweepstakes and when it was over, I don't know if I was happier for the fact he was going to Edmonton or he wasn't going to Toronto.

This should end the dismal run of 4 number 1 picks in 6 years and if it doesn't, start firing everyone from Kevin Lowe to Joey Moss. Who's kidding who, the Oilers could have sent their fans over the top had they announced Saturday night they were tying the can to Lowe who should already be having coffee with Dallas Eakins at the Tim Hortons outside the Edmonton unemployment office.

It also brings up some interesting scenarios when it comes to the future.

1. Will Edmonton trade one of their talented forwards to get something else? If so, who would it be? My money is on Taylor Hall if it should happen seeing there are too many centers now. You need that stud defenceman or a top notch goalie. The question is who can you find for a dance partner?  You aren't getting Drew Doughty or Shea Weber and you're not getting Erik Karlsson either. Somewhere though, you might find someone. Could Duncan Keith or Brent Seabrook be available? With Toews and Kane locked into big money contracts, Chicago won't want to take Hall's salary, They might take Yakupov's though!

2. Will this entice high profile coaches to want to come to Edmonton? Would Mike Babcock be interested? I can't see him leaving Detroit, but who knows!

3. Will this make some free agents want to come to Edmonton who normally wouldn't until Saturday's events?I guess we will find out July 1

Its going to be an interesting summer once the Stanley Cup has been presented.


By the way, there is no doubt the Buffalo Sabres and the Leafs tanked their way to the finish line. We all know how the Buffalo fan base cheered their team on to defeat so they could get McDavid.  It looks good on them to not have their plan come to fruition. At no time, did anyone accuse the Oilers of tanking and they end up reaping the rewards. Edmonton could have sold off some of their assets to try and finish last, but they didn't and that can't be argued. Some have wondered how Edmonton can win 4 out of 6 years and that's a legitimate bitch to have, but how does the NHL benefit from having what could be their next marquee player in Edmonton? If someone wants to answer that, go right ahead!!

Despite what happened Saturday, I still think the NHL should just put 14 balls in the bingo hopper or whatever they do and start the machine up. Whatever ball comes out sees that team pick 1st and so on and so on.


I would love to be talking about a Game 6 in the Brandon-Regina series in this post, but we know that won't be happening as the Pats were knocked out of the playoffs Friday night in overtime. Brandon takes the series in 5, but you know they are feeling a little fortunate knowing they were two shots from being down 3-2. That is the highs and lows of playoff hockey. It will be interesting to see just what Regina does in the off-season as they will be very talented in 2015-16 with the likes of Daniel Wapple, Connor Hobbs, Colby Williams, Sam Steel. Austin Wagner. Adam Brooks and Jake Leschyshyn. Good times are ahead methinks!

How good have the WHL playoffs been?  21 of 61 games so far have had to go to overtime. The Calgary-Kootenay first round matchup had 3 OT's in 7 games with the Hitmen-Medicine Hat series having 3 OT's in 5 games.  Despite the fact that a third of games have gone past 60 minutes, we have only seen one seven game series though which is surprising.

Kudos to Big Dog 92.1 morning man and High Impact Wrestling announcer Mike McGuire. He had the idea of getting a Regina Pats flag raised at City Hall last Friday to show some support for the team. Its something I don't think has ever been done before. If it has, I don't remember it. As McGuire stated, and he's right, the Pats get overshadowed by their football friends who wear the /=S=/ and its nice to see them get their moment in the sun as far as the city is concerned.


The Toronto Raptors opened up the playoffs with a very disappointing performance. Game 1 against Washington was an ugly affair with star players Demar DeRozan and Kyle Lowry having an off afternoon. If Toronto is to win this series and any series, those two have to be on the top of their game. They weren't in the opener.

Seeing the Raptors fans come out en masse to Maple Leaf Square makes me wonder if there is any way we could do that in Regina with Rider fans. Imagine a big screen TV at Wascana Park or maybe the site of the old Mosaic when it is torn down to give Rider fans a chance to watch Canada's team. That would be awesome and would make for great TV. Of course, it might be a little cold for the Western final or Grey Cup.

This Calgary-Vancouver series is turning into a gong show. If the NHL fined Bob Hartley 50 grand for what happened in Game 2 they had better tell Vancouver to write a cheque after Game 3. There's good physical hockey and then there is stupid hockey and Alex Burrows brings you the latter and Kevin Bieksa and Dan Hamhuis aren't much better. Why was Hamhuis even playing in Game 3 after his actions in Game 2. I can't stand either team so its not like I have a rooting interest in the series.

I want to think I will know what its going to be like in Winnipeg tonight, but I don't think any of us do. The MTS Centre will be an absolute madhouse!


The more I see Jets defenceman Jacob Trouba play, the more impressed I am. There were some whispers at the NHL draft when he was taken that he was the best blueliner on the board ahead of Morgan Rielly and Ryan Murray. So far, that's been proven to be correct. It was also suggested Trouba's stock while high would have been higher if he were playing in the CHL and not the NCAA. I am not going to say that isn't the case, but the quality of NCAA players has done nothing but grow over the past five years. Its not the pipeline that the CHL is to the pros, but a lot of good hockey players are coming out of the US college system and that's not about to change.

Good luck to the Regina Pat Canadians at the Telus Cup. Hopefully we are watching them play next weekend on TSN.

Its safe to say the Oakland Athletics and Kansas City Royals are baseball's version of the Canucks and Flames right now. Brett Lawrie certainly escalated that rivalry.

I've got the big chair for the Sportscage at 4 so I'll talk to ya then.

LMAO seabrook or keith for yakupov itll take hell of alot more than yakupov. that was good for a laugh though.

I loved your line about Lowe having coffee with Aikens but why did you spare MacTavish? Me thinks he should be seated at the same table.

There is no way Chicago does a Hall-Keith or a Hall-Seabrook thing, but they do need to get rid of salary. I could see Yakupov and Purcell or Yakupov and someone who is in OKC ready to make the step.

I wonder if L-A would part with Muzzin or Martinez.

Not an Oilers fan, but you're right. The team played hard each night and didn't try to ensure finishing last by getting rid of their better players like Buffalo did.

Like you, I think its a crock Buffalo is now lower than 2nd, but I don't like your idea for the draft lottery. If a team like Philly, Boston or L-A had won, it would just make them stronger at the expense of someone else.

It needs to be weighted somewhat, but not as much as it is now.

Mitch. What makes you think things will be different with McDavid? I mean come on, 3 1st overall picks and not even CLOSE to the playoffs.

I was SO disappointed he's an oiler. I'd rather him be in Toronto because they'll know how to build around him.

and don't tell me they need the right coach because that's a bunch of BS.

They need to rid themselves of the Oiler alum and start fresh. Hire Ray Shero or Jeff Gorton or Peter Chiarelli or whoever.

I mean how many more chances are these guys going to get???

Let the haters hate! The Oilers have the plum prize in the draft and I couldn't be happier!!

I had just about given up on the Oilers, Eberle or no Eberle, but this changes my mind.

Who's tight under the cap? Who is looking to sell. That is where Edmonton should look when it comes to trading someone and yes, I would trade Yakupov first if I can, but Hall or Nuge may end up being the guy. I say Hall.

Just think Mitch, your buddy Remenda will be buddies with McDavid now.

I'm guessing this makes you oh so happy!

Mike from Big Dog had the wisdom no one else in town has had for years.

Many players have said Edmonton is not a place to be, so nobody wants to go there. The oilers will never get anyone that has a no trade clause as they will say NO WAY to Edmonton. The problem is at the top and until the ownership forgets about loyalty and worries about winning, it will never change.

The Oilers winning the draft lottery is the best thing for the NHL actually. It just shows that you will not get rewarded for tanking on purpose. And one of the best hockey cities in the league will now get the top rated prospect. Thats a great scenario for the NHL and Edmonton will welcome Mcdavid with open arms. Who would honestly want to play in Arizona or Buffalo anyway? Both teams are headed for trouble as they can't sell tickets

The best thing for the NHL?? Really?

What in the world do you think will have changed with this pick that hasn't with the last 3??

In 5 years when he's a leaf and the oilers still haven't made the playoffs and are in a risk of folding because no one comes to the new rink anymore, maybe then you'll get it.

Drew Remenda will be the closest with McDavid out of all media now.